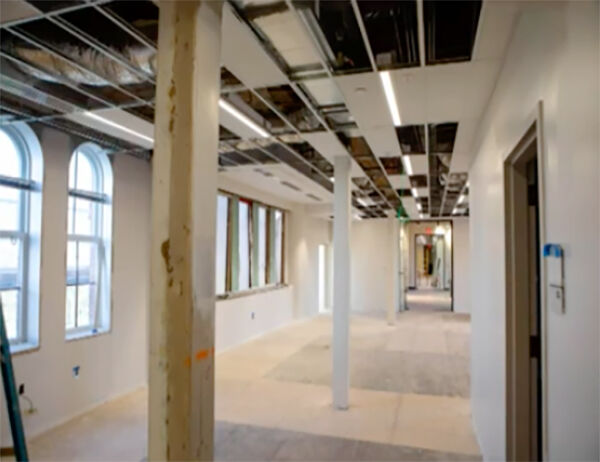 Student gathering space is under construction on the third floor of Northeastern State University’s Seminary Hall as part of a larger restoration project. 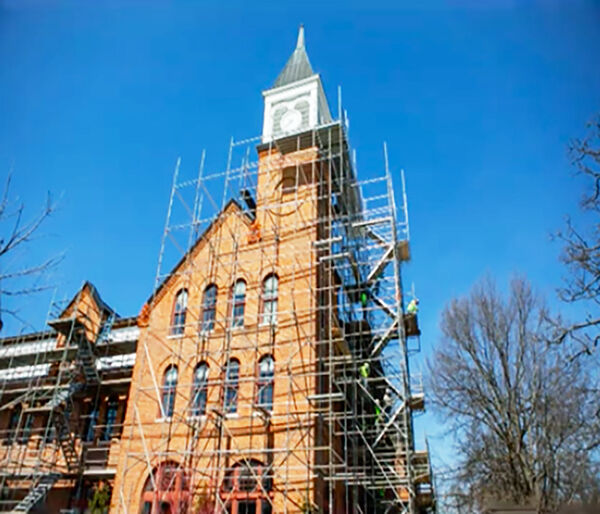 The clock tower at Seminary Hall on the Northeastern State University campus is being repaired as part of a multi-million dollar restoration project. 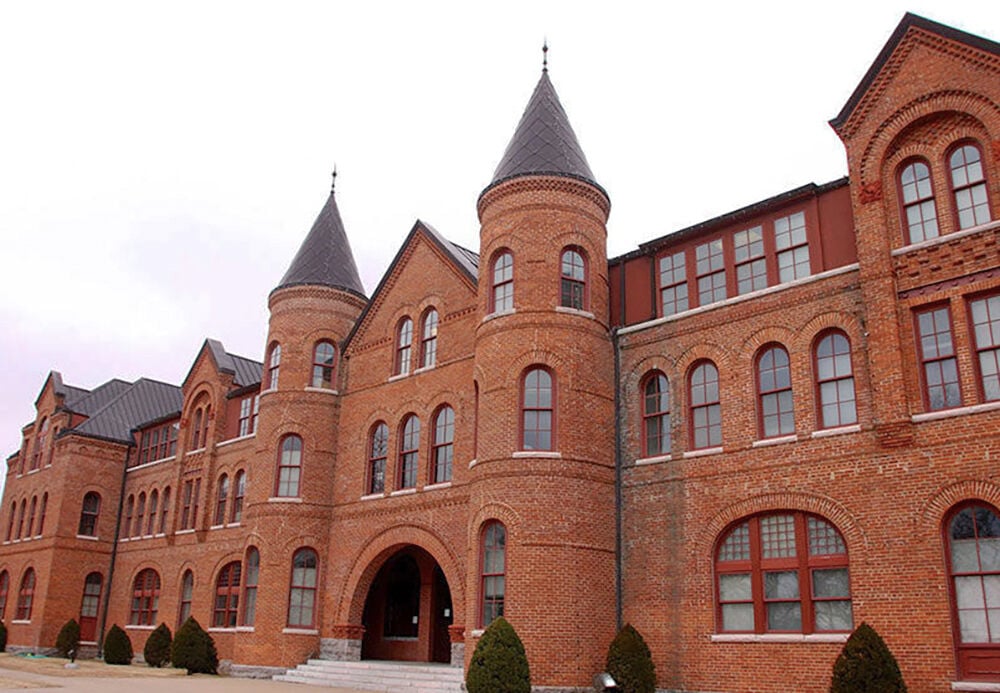 Student gathering space is under construction on the third floor of Northeastern State University’s Seminary Hall as part of a larger restoration project.

The clock tower at Seminary Hall on the Northeastern State University campus is being repaired as part of a multi-million dollar restoration project.

TAHLEQUAH – Cherokee Nation leaders were given a glimpse of ongoing improvements at Seminary Hall, a 132-year-old building steeped in Cherokee history.

“There’s been some major renovations taking place there,” Tribal Council Speaker Joe Byrd said July 12 during the Tribal Council meeting. “This renovation they’re doing – you’re going to see – is just going to be one of the most awesome sites we’re going to have in this part of the country.”

The oldest building on NSU’s campus, Seminary Hall was formerly the Cherokee National Female Seminary. It opened north of Tahlequah in 1889, two years after the original 1851 school in Park Hill was destroyed by fire.

“It’s very important to all of us,” NSU President Steve Turner said. “The building, as you know, was started in April of 1887. It opened on May 5, 1889. All the structure is made of brick. There is only a little bit of steel.”

Included in the restoration project are roof and floor upgrades using, when possible, period materials.

“We are being very sensitive to the historical nature, not only its history but how we reconstruct,” Turner said.

Construction crews are also repairing the roofline and clock tower, installing new windows, rebuilding brick to its original state and correcting the dormers. The third floor is being modified to include a museum as part of an agreement with the CN.

The tribe’s donation is covering much of the work, but “was not enough to complete changing out all the windows,” Turner said.

“So NSU has funded the additional $1.5 million to replace all the windows,” he added.

Turner said the hopeful completion date is spring 2022. In 2020, former Principal Chief Bill John Baker called the undertaking “an investment for the generations to follow.”

“When our Cherokee leaders were first removed to this part of the country, they made a moral decision to invest in the future of our people through education,” Baker said. “Despite the trauma of removal and starting over, the tribe allocated half of its overall budget to erect the seminary school and fund its mission.”

The original Seminary Hall is noted as the first higher learning institution for women west of the Mississippi. It opened 12 years after the Cherokee people were removed from their homes in the southeastern United States to Indian Territory, now Oklahoma.

There was also a male seminary that burned in 1910. It was never rebuilt.

In other business, the Council increased the tribe’s $3 billion-plus comprehensive budget by more than $40 million to accommodate grants, Indian Health Service funding and other federal support.

The Council also agreed to seek federal funding for the CN Spider Gallery to develop and market “an online gallery capable of reaching both national and international markets with Cherokee arts and traditional art classes in a virtual setting.”

“The COVID-19 pandemic has caused a dramatic decrease in both artist retail sales and workshop availability,” the resolution states, adding that an online presence could help better position the gallery and its Cherokee artists “for any future disasters.”

In addition, construction of a roundabout at U.S. 59 and Oklahoma State Highway 10 in Kansas, Oklahoma, was given a green light. The project will be paid for using federal grant money from the Tribal Transportation Program Safety Fund.

The Council approved plans for a memorial that honors Cherokee speakers lost to COVID-19. According to the resolution, the memorial will be located at the future Durbin Feeling Language Center in Tahlequah. The resolution in part reads, “The Cherokee Nation has lost many of its Cherokee speakers to the COVID-19 pandemic creating a hardship on numerous Cherokee families and the language and cultural preservation of the Cherokee people.”

A separate piece of legislation approved July 12 authorizes the tribe to enter into renegotiated detention contracts with county and municipal jails inside the reservation.

Councilors also supported a resolution that encourages tribal consultation and representation within the Boys Scouts of America program. According to the resolution, the CN has been a supporter of the Boy Scouts of America “for many years, providing annual contributions to local troops and packs” and organizing cultural experiences.

During his report to the Council, Cherokee Nation Businesses CEO Chuck Garrett said live music would return to the Hard Rock Hotel & Casino Tulsa in August.

“We are starting to book shows, and look forward to providing the entertainment that we’ve been known for,” he said. “On Aug. 18, Clint Black will be performing, and that will be our first musical show.”