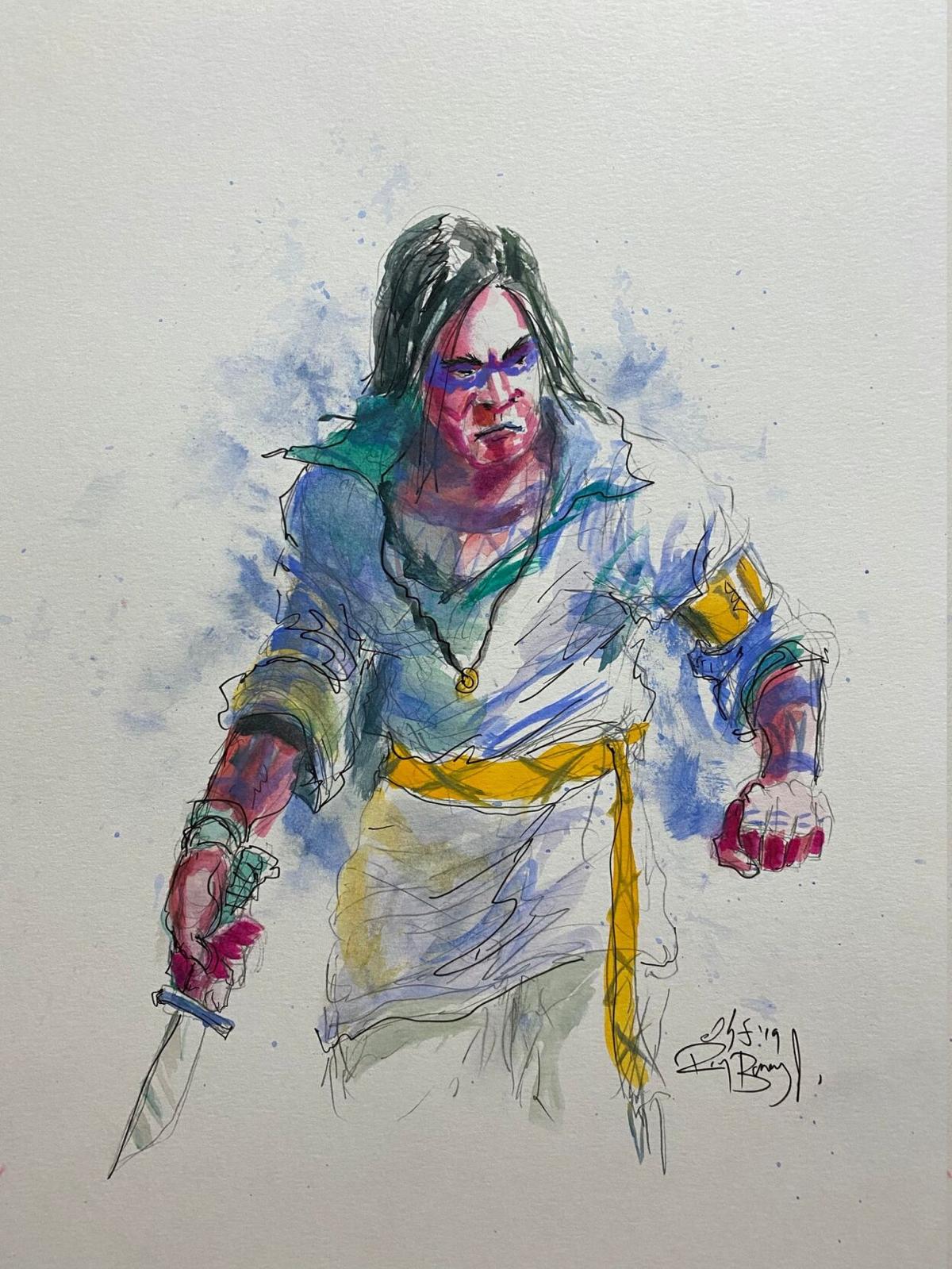 “A Warrior” was created by Cherokee artist Roy Boney Jr. as part of his “Sketch a Day” series, which has proven popular, on his website royboneyart.com. 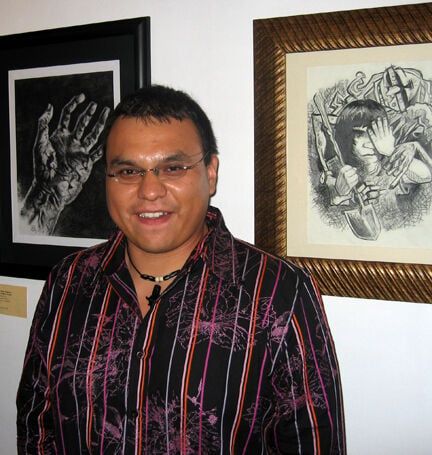 Cherokee artist Roy Boney Jr. has been winning awards for his artwork for nearly 20 years.

TAHLEQUAH – Roy Boney Jr. is well-known around the Cherokee Nation’s W.W. Keeler Complex for his work to preserve the Cherokee language, but he is also equally renowned as an artist.

For nearly 20 years Boney has presented his works, using Native themes and traditions, in art exhibits and competitions and won numerous awards.

“In addition to the management side (of the Cherokee Language department), I also do quite a bit of artwork for the Cherokee Nation when it comes to language programs,” Boney said. “One of the most recent things was the Cherokee language animated series ‘Inage’i.’ I was the principal designer for that cartoon series – the characters and artwork.”

Boney is working with Osiyo TV to design and animate a character that will teach Cherokee language. Outside the office, he also tries to incorporate the language into his works.

“I do digital illustrations, animation and traditional painting as well, like watercolor, acrylics and drawings,” he said. “I’ve been drawing as long as I can remember. It’s always been part of who I am.”

While obtaining his bachelor’s degree in fine arts from Oklahoma State University, Boney received formal education as a graphic designer. When he graduated in 2002, such skills were commonly used for page layout and art elements in print media. Boney was intrigued by its visual components.

“That’s how I got into digital illustration and the comic book work and animation,” he said.

Boney then enrolled in the University of Arkansas-Little Rock and earned his master’s degree in studio arts in 2007. His emphasis was in media productions in which he produced animations and traditional paintings.

“I like to consider myself a storyteller through artwork,” he said. “It doesn’t really matter the medium. Whatever was there – the animation, the digital iPad sketch, the painting – for the story I wanted to tell, that’s what I used for it.”

Comparing his work to the traditional Native art of storytelling, Boney simultaneously sees correlations and divergence.

“These days, the community has changed quite a lot,” he said. “A lot of the Cherokee community is spread out across the United States and the world. Having a way to reach them – through animation, a video online, or a graphic novel in a bookstore or online, or a painting – people can see these things from all over the world and don’t have to come here in person. It’s a lot easier now. Utilizing all this technology sort of circles it all back to this idea that you’re still getting your stories out there, it’s just a different way of getting it to the people.”

The COVID-19 pandemic has been disruptive, but in 2020 Boney’s works were included in “Re/Convening: Native Arts of Oklahoma,” held at The Gallery in Tulsa by ahha Tulsa, and “Speak While You Can,” a traveling exhibition on Native languages.

In some ways, he is in professional and artistic sweet spots that encompass and indulge all his passions.

“I do enjoy making art and I’m happy I’ve found a way to pool all my interests together,” he said. “I am using my artwork to tell these stories, and there are Cherokee themes in all of it.”

Boney maintains a website, royboneyart.com, that includes a gallery, videos and his popular “Sketch a Day.”

“For almost 10 years I’ve been doing a daily sketch,” he said. “It is spur of the moment and includes Cherokee themes, and the people seem to enjoy that. People can also find me on Instagram and Facebook.”