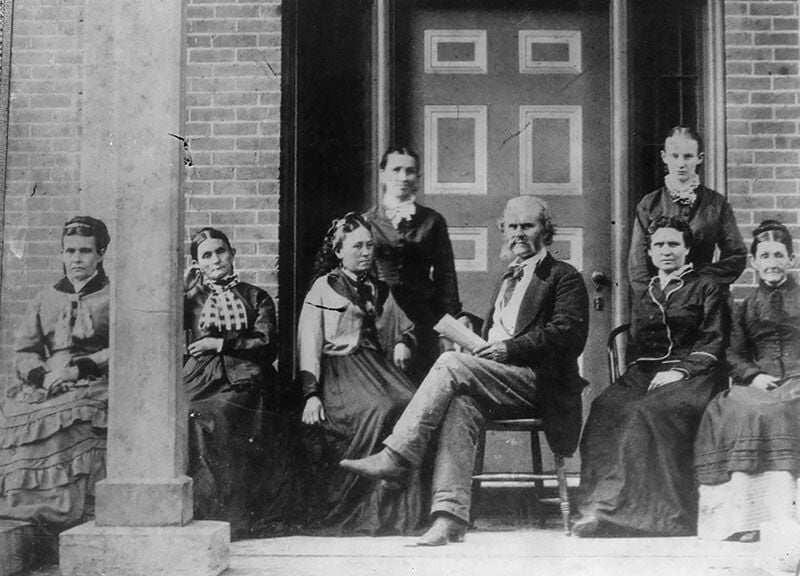 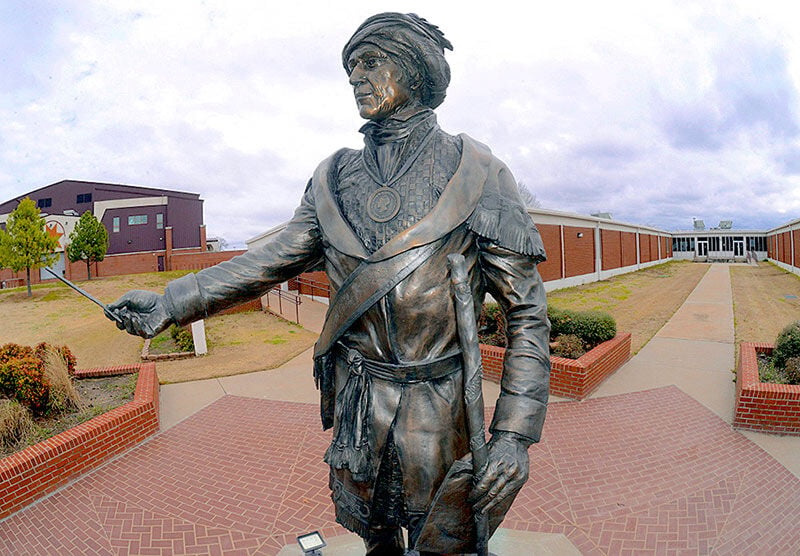 A statue of its namesake sits in front of the Sequoyah High School entrance in Tahlequah. Sequoyah Schools started as an orphan asylum in 1871, and over time became an educational institution that consists of the Cherokee Immersion School and Sequoyah High School.

A statue of its namesake sits in front of the Sequoyah High School entrance in Tahlequah. Sequoyah Schools started as an orphan asylum in 1871, and over time became an educational institution that consists of the Cherokee Immersion School and Sequoyah High School.

TAHLEQUAH – This year marks 150 years since Sequoyah Schools was established, and it has undergone many changes from its start as an orphanage.

Sequoyah High School teacher and historian Don Franklin said that in 1871 the Cherokee Nation signed a resolution to create the Cherokee Orphan Asylum.

The tribe adopted child care solutions from white America whereas traditionally Cherokees took care of each other’s children so that no child was left without family, according to a “Chronicles of Oklahoma” article.

Relying on kinship networks, Cherokees and other tribes did not create orphanages after the forced removals in the 1830s, when some children were without parents. Remaining families took in children, caring for them as their own.

Under the 1835 Treaty of New Echota, Cherokees were provided an orphan fund of $50,000 after the removal, which they used to create a foster care system that paid families a per diem for children under their care. But this system only worked until the Civil War, which brought about disruption of family life.

“In late 1871 the Cherokee National Council acknowledged the necessity of making the Orphan Fund a standing appropriation,” states the article. “The fund, along with back pay and bonuses due to the families of Cherokee soldiers who died for the Union cause, would pay for an orphanage as well as the staff to run and serve as teachers.”

Though it was an orphanage, tribal leaders “emphasized” it as an educational institution and placed it under the Cherokee Board of Education.

The orphan asylum reached up to as many as 250 children at one time, taking in “true” orphans, children with one living parent who was considered “destitute,” or temporary placement of children whose parents were living but had financial struggles for a short time, the article states.

“There was a spirit of solidarity at the Cherokee orphanage. The children were Cherokee living within their tribal nation, and while school lessons were taught in English and identified with the Euro-American worldview, children were not surrounded by an all-white group of authority figure. The support staff and many of the teachers were Cherokee,” states the article.

Since the orphanage was under the context of an educational facility and financed by the tribe, the Bureau of Indian Affairs had no control and the Cherokee Nation had no obligation to report its activities to the BIA, until 1887 when the Dawes Act came about and attempted to dissolve tribal governments.

In the 1890s, the Curtis Act gave the BIA “supervisory control” of the Nation’s, and other tribes’, educational systems. In 1901, the Cherokee National Council and the Dawes Commission “agreed to terms” that determined the orphanage’s future and the Orphan Fund.

Plans were in place to close the orphanage when a fire destroyed the facility in 1903, leaving more than 140 children homeless. They were moved to establishments that could care for them. Two months later, orphanage staff reorganized the Cherokee Insane Asylum facility to reopen the orphanage.

In 1909, the federal government took over and the orphanage was renamed the Cherokee

Orphan Training School, and the BIA “expanded the manual labor curriculum to include a wider range of domestic science and trade-skill studies.”

Franklin said the school went through two more name changes, Sequoyah Orphan Training School in 1925 and then Sequoyah Vocational School in 1945, when it was opened to students from other tribes. Prior to 1930, it educated children up to the eighth grade. By 1934 it had first through 12th grades.

From 1964 to 2006 it was known as Sequoyah High School. When the Cherokee Immersion School was introduced into the school system, it became Sequoyah Schools, as it is known today.