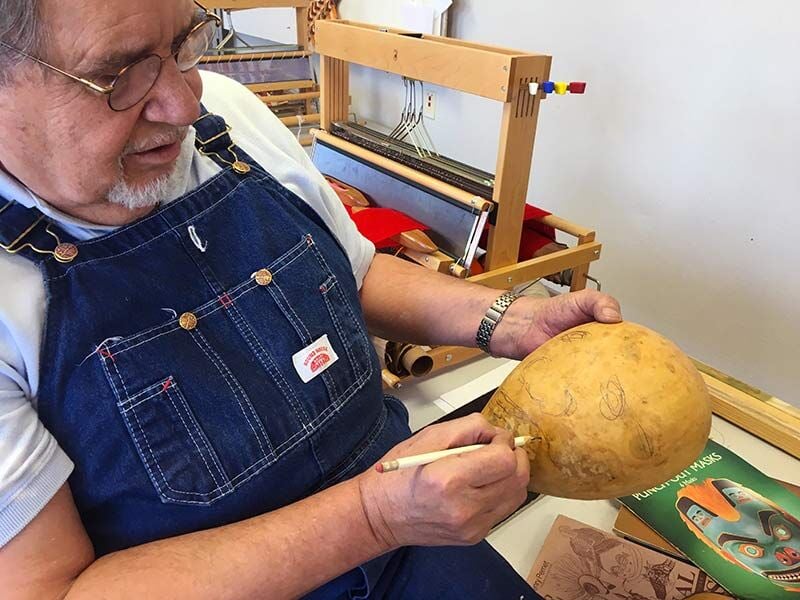 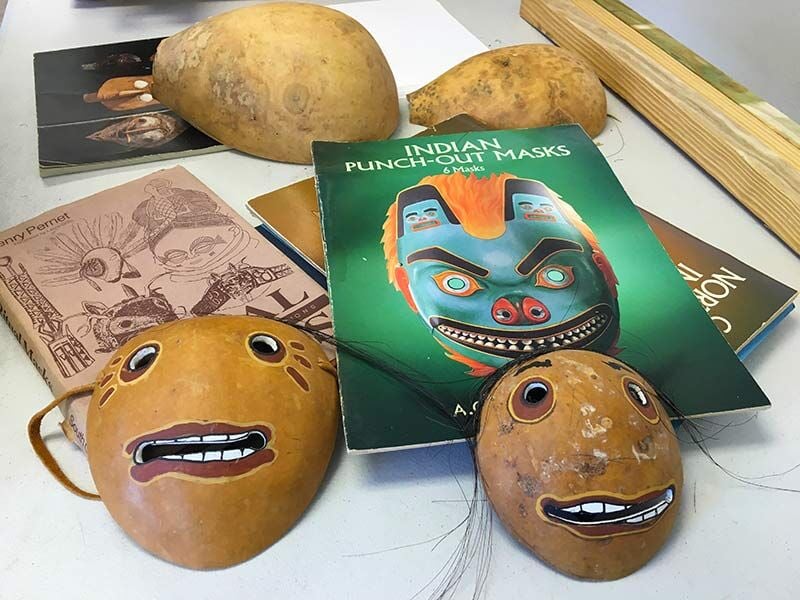 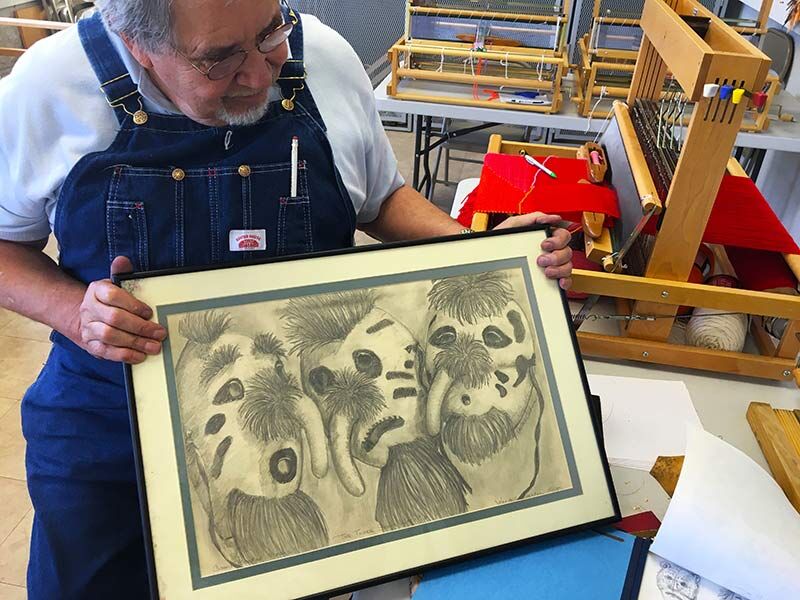 Cherokee Nation citizen Wendell Cochran holds an art piece he drew of booger masks that once hung in a restroom inside the Cherokee Nation's W.W. Keeler Complex in Tahlequah, Oklahoma. JAMI MURPHY/CHEROKEE PHOENIX

Cherokee Nation citizen Wendell Cochran holds an art piece he drew of booger masks that once hung in a restroom inside the Cherokee Nation's W.W. Keeler Complex in Tahlequah, Oklahoma. JAMI MURPHY/CHEROKEE PHOENIX

TAHLEQUAH, Okla. -- When a call went out looking for the Cherokee considered the most knowledgeable in gourd mask making, Cherokee National Treasure Wendell Cochran was agreed to be the "Yoda" of not only its history but how it's used today.

Cochran has made gourd masks for years and is said to be responsible for revitalizing the art in Oklahoma.

"Masking is a tradition that's used by almost every civilization and culture. It's used for a number of purposes. In Italy you had the theater. England had the mummers. Mexico has this huge tradition from Spain of masking like they do for Halloween, Night of the Dead. And Africa, of course, has a huge contemporary tradition of masking with their rituals, their dances and their celebrations," he said.

In America, before missionaries stopped masking activities, there were tribes with masking traditions, including the Hopi, Mohawk and Zunis of the southwest, Cochran said.

The Cherokee, he added, also had an active masking tradition before missionaries.

"Christianity...came a long and made so much fun of it that they (Cherokees) either stopped or people were converted to Christianity and were convinced that by going to celebrations and dances, which would usually happen at night, were sinful and of the devil, and so they stopped," Cochran said. "In North Carolina it practically became extinct until probably 20 years ago when young people went back and tried to discover stomp dances and mask celebrations. And here in Oklahoma it died out completely."

Cochran, a collector of masks of all sorts, said he got into gourd masks while trying to buy them in the early 1980s. He said he searched but found none for purchase. So he had the idea, because he knew where he could get gourds, to make gourd masks similar to pictures of them he had found.

"So I made a couple of facsimile masks, and then people wanted to buy them. I started making them and for about 10 to 12 years I was the only one here making gourd booger masks," he said.

"In all the traditions of masking among the Native Americans there are like three distinct purposes for masks. The most important one has to do with spirituality, with healing. Has to do with the metaphysical and the mysterious. It has to do with the belief in a higher being, with spirits that control our lives. And so masks were used as a visual image in lieu of actually seeing these spiritual forces," Cochran said.

Another purpose was for celebration such as during fall or harvest time, he said.

"And then there is storytelling, where you go in the evening before television, before radio, before movies. What do you have for entertainment? You have the village campfire...so people would tell stories about their exploit with either war or with hunting or would just tell funny stories," Cochran said.

There were also dances before hunting, he said, so preparation would be made the night before using masks to replicate the animals such as deer they may be hunting the next day.

However, the gourd masks that people talk about most today are booger masks. Cochran said they are social masks that serve no spiritual purpose.

"I would call them satire, social satire masks. But they serve a very useful function. One, they're entertaining. Number two, booger stood for strangers or small enemies in the community, but Cherokees didn't call them boogers," he said. "That's a white man's term brought on by the settlers that lived around the Cherokee communities back east when there would be dancing at night in the winter time and the whooping and hollering and people wearing masks. 'Those Cherokees are up there doing their booger thing.'"

The word booger, he said, comes from Europe and refers to a vulgar term called "bugger."

"We also use the word booger for like Halloween, so it's a common American term," he said.

While there, they would not see and be offended by what the humans were doing, he added.

"So in the fall and the winter when there was nothing else to do they have dances, gatherings and parties or whatever, and everybody would come in the community and they'd be there and about halfway through the party suddenly there would be the arrival of the visits of the 'boogers.' Strangers, strange people from an unknown land speaking a strange language and asking and wanting things," he said.

Cherokees being prim and proper, he said, were either the victims of or the audience of the boogers.

"The boogers that arrived of course were the young men of the village who were feeling their oats and they would get dressed up as an old, old man or an old, old woman, and in this social satire situation they could come as the preacher or the town banker," he said. "One of the things that the purpose that was really fulfilled with boogers and booger dancing was that it disarmed the angst and anger that the society felt toward a select group or an individual."

He said it helped de-escalate sometimes potential violent situations. During the booger mask dancing, young men would dress up and nothing was off limits, Cochran said.

"There was a great deal of vulgarity, that we would call vulgarity. Earthy, let's call it earthy. A lot of earthy action. Recorded notes of people who went to booger dances would see an old male visitor coming around with a long coat, but under his coat he would have a rubber bladder filled with water and he would squirt people," he said. "Or he would open his coat and have a false phallus hanging on his pants. Or try to kiss a girl and have his teeth out -- old women, with large breasts and huge hips being bossy. Any action they could remember about the person they were satirizing would go into it, but exaggerated. Nothing wrong in their view because they didn't have that Christian morality of 'what you can't do.' Political correctness just wasn't such a thing."

At some point during the dancing "the strangers or boogers" would fight and get out of hand and then be escorted out by the Cherokees before dispersing into the wild.

Cochran said today people make masks using a lot of fantasy while borrowing from other cultures and then call them booger masks.

"It's just a generic term now. It has no specificity of what will or not be applied to a booger mask. Any mask that is made by a Cherokee for consumption is classified as a booger mask, and we don't make a huge distinction, and it's not taught in our culture as to what is and what is not a booger mask and how it's used," he said.

Booger masking is really seen as art now, he said. There are Cherokees making masks that do great work, Cochran added, but as far as a real interruption of boogers, that hasn't happened in Oklahoma as far as he knows. However, he isn't opposed to seeing a booger dance in its all its glory.

"I would love to see a booger society where we had men from all over or young men who just like to horse around and become this class of clowns to get boogered up and disrupt everything, a council meeting. They would have to be forgiven culturally. They would have to be forgiven for breaking into a council meeting or a gathering or anything because they're boogers and you don't mess with the boogers because they were important," he said.