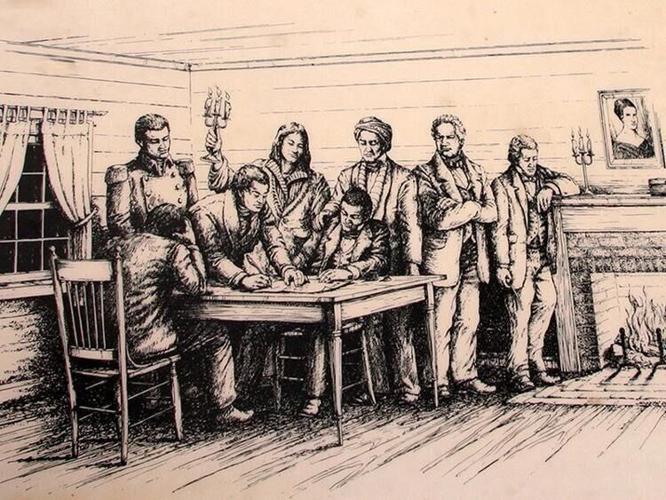 An artist depiction of the signing of the Treaty of New Echota is located at New Echota Historic Site in Calhoun, Georgia. 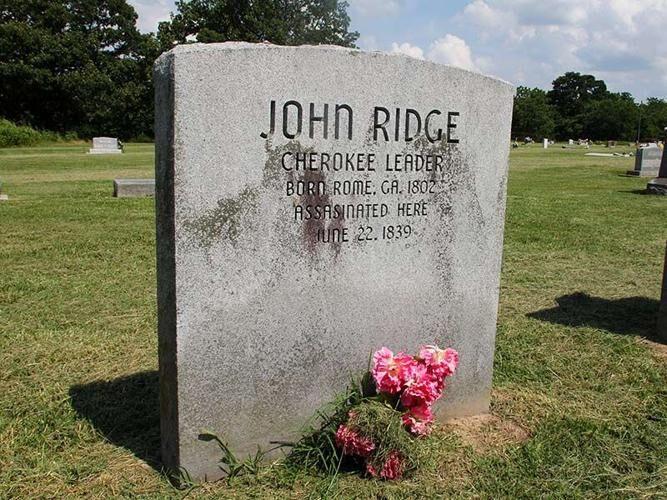 For signing the Treaty of New Echota, which called for the sale of all Cherokee lands east of the Mississippi River and the removal of all Cherokees to west of the river, John Ridge was assassinated at his home on June 22, 1839, in front of his family. 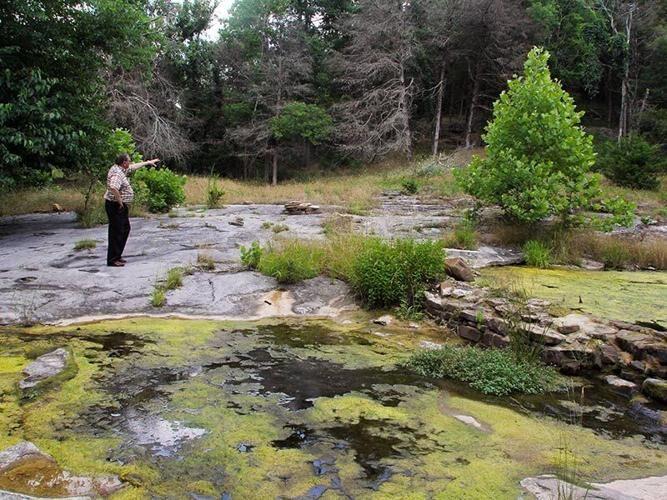 In this photo, former Tribal Councilor Jack Baker points to where he believes the assassins of Major Ridge would have hidden to ambush him on June 22, 1839. 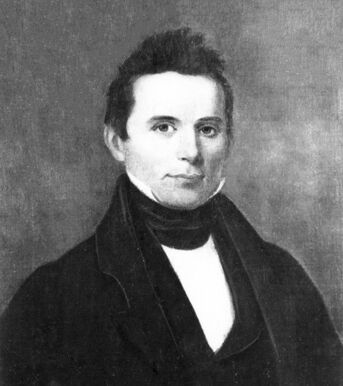 Elias Boudinot was a Cherokee signatory of the 1835 Treaty of New Echota, which the federal government used as justification for the Cherokee Removal, despite the tribe’s claims that the treaty was brokered without authorization. Boudinot, Major Ridge and John Ridge were all killed on the night of June 21-22, 1839, for negotiating the treaty.

An artist depiction of the signing of the Treaty of New Echota is located at New Echota Historic Site in Calhoun, Georgia.

For signing the Treaty of New Echota, which called for the sale of all Cherokee lands east of the Mississippi River and the removal of all Cherokees to west of the river, John Ridge was assassinated at his home on June 22, 1839, in front of his family.

In this photo, former Tribal Councilor Jack Baker points to where he believes the assassins of Major Ridge would have hidden to ambush him on June 22, 1839.

After the Cherokee people were uprooted in the late 1830s from their traditional lands and forced to the Indian Territory on the Trail of Tears – during which thousands perished – a tenacious division emerged in the tribe, and it manifested in shocking fashion on the night of June 21-22, 1839.

There was little question about the motive of the killers. The three victims were members of the “Treaty Party” of Cherokees, who negotiated and signed the Treaty of New Echota with the U.S. government without authorization from Principal Chief John Ross or any other tribal officials.

Most Cherokees, like Ross, accorded the document no legal validity. The federal government, under the administrations of Andrew Jackson and Martin Van Buren, disagreed. Waving the treaty as legitimate and flouting a U.S. Supreme Court decision favoring the Cherokees, Washington prosecuted the Removal.

There also wasn’t any confusion about the justification for the killings. In 1829, with white settlement chewing into Cherokee territory, tribal councilors approved a penalty of death against any Cherokee who ceded any tribal lands.

The mystery was who killed the men. That was never definitively determined by trial, but it seems many Cherokees had a good idea.

Watie identified one of Major’s attackers, James Foreman, and killed him in 1842. That slaying led to the retaliatory killing of Watie’s brother Thomas in 1845. Watie was tried in Arkansas for killing Foreman, but was acquitted on claims of self-defense.

Contemporary accounts report that John was stabbed to death outside his home on Honey Creek, in modern Delaware County. Major, in route to Vineyard in Washington County, Ark., was killed near the state border.

Boudinot was erecting his new home at Park Hill but departed with three men for the residence of Rev. Samuel Worcester, mission superintendent at the Presbyterian church in Park Hill and Boudinot’s partner in printing, to get medicine for them. Before they could arrive, the men killed Boudinot near the present-day Little Mission Cemetery and Park Hill Creek.

When the last Cherokees stepped off the Trail, all tribal factions immediately got to the business of reconstituting an organized, unified tribal government. It was rough from the start.

A meeting was held at Double Springs, northwest of modern Tahlequah, to find common ground. The "Old Settlers" and "Treaty Party" Cherokees were outnumbered 2-to-1 by the recent arrivals led by Ross. The smaller groups insisted any union of the factions must be under the government and officers they had already established, which was a non-starter for the Ross affiliates.

After the meeting broke up, the attacks were carried out over the course of the night.

The animosity between the factions remained raw for decades, and many scores were settled and avenged during the Civil War. It took the leadership of Lewis Downing, elected Principal Chief in 1867, to start the tribe down the path of reconciliation and reunification.

Giving his first speech to the council after taking office, Downing said: “The very great importance of the entire unity of our Nation cannot have escaped your attention. Our laws should be uniform, the jurisdiction of our courts should be the same over every part of our Nation and over every individual citizen. It is for the interest of the [Southern Cherokee] people of Canadian District as well as for the interests of the people of other districts, that every line of distinction be blotted out. That we should be one in our laws, one in our institutions, one in feeling and one in destiny. I therefore recommend that the council adopt immediate measures for bringing about the removal of all such distinctions."

There are suspicions about whether Ross had any involvement in the killings or was an accomplice after the fact, but no evidence has emerged proving allegations toward the Chief.

The March 1934 edition of the Chronicles of Oklahoma published an 1890 account written by Ross’ son Allen, in which he claims his father had no prior knowledge, and was angered, by the killings. Conversely, Allen claims he knew the men would be killed.

“There was some dissention caused by men who had signed the Treaty of 1835 and were opposed to John Ross as chief. After several days of endeavor to get together and having failed, some of the leaders of the emigrants called a secret meeting without the knowledge or consent of my father John Ross at what is now known as Double Springs about four miles north west of Tahlequah for the purpose of making plans to effect an act of union; after much discussion the meeting was called upon to read and to adhere to a law that had been passed by the Cherokee National Council when the first attempt was made to negotiate their lands in the East; when it was 'provided that who-so-ever should agree or sign an agreement to sell their lands should forfeit their lives.’

“Believing that the same men who had made the Treaty of 1835 were responsible for the failure of the Cherokee people to get together, this meeting decided that these three men should be executed as provided by the law as read.

“The meeting further decided that this meeting must be kept from their chief because he would prevent it as he had once before at Red Clay before their removal.

“A committee was appointed to arrange details and in response to that committee numbers were placed in a hat for each person present; twelve of these numbers had an X mark after the number, "which indicated the executioners.

“All present were asked to draw. When I came to draw the chairman stopped me and told me that I could not draw as the committee had another job for me on that day.

“When the drawing was finished I asked the chairman what I was to do. He told me that I was to go to my father's home on the evening before this execution and for me to stay with my father that night and the next day and if possible to keep him from finding out what was being done.

“I went to my fathers as instructed and stayed until I heard that Mr. Boudinot had been killed; I knew that the orders of the committee had been executed. About five o'clock that evening my father and I went to visit with Mr. Arch Campbell and while there some men passed near and as they passed by they threw something into the yard. My father asked what it was. I told him that it was a stick.

“I afterwards returned and found that it was a knife, which is still in my possession. These men were some of the full bloods who had participated in the killing of Mr. Boudinot a few minutes before about half a mile west of Arch Campbell's home.

“I know that my father did not know anything about this matter. The last two men who took part in this were Judge Riley W. Keys and Jackson Rattling Gourd.

“My father was angry when he learned the facts, and when asked by General Arbuckle to come to Ft. Gibson for conference agreed to go, but his friends fearing for his life would not let him go alone and kept a guard about his home for some time.

“The ‘Act of Union’ was formed in a short time and the newly formed council passed an act pardoning all parties connected with this awful affair.