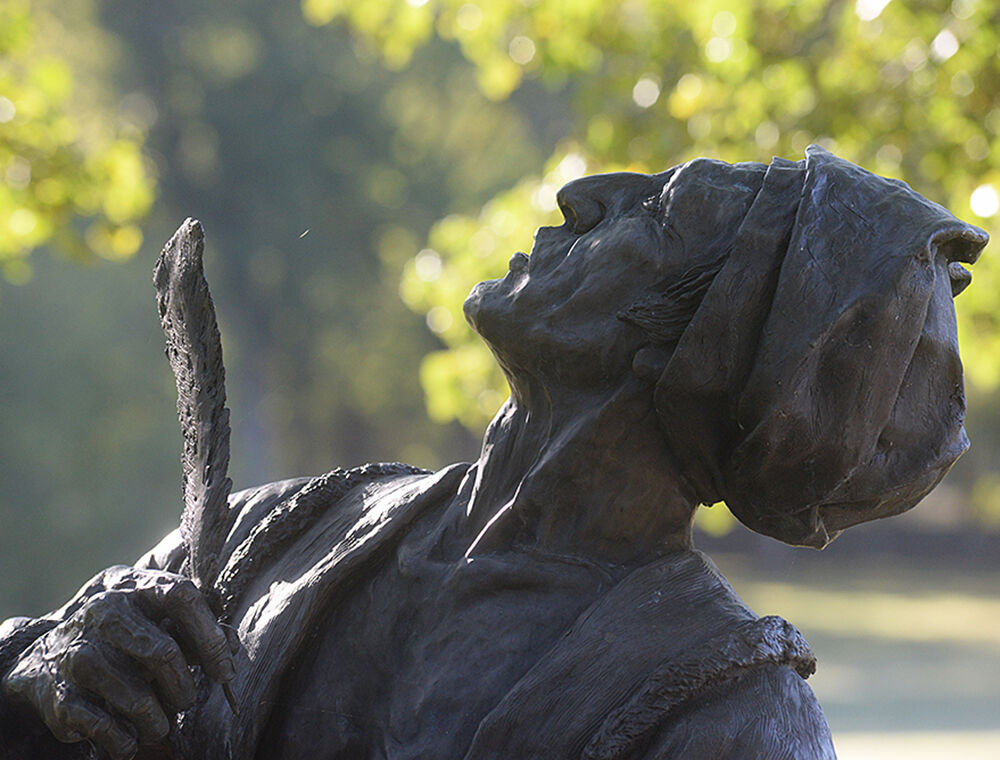 A statue of Cherokee syllabary inventor Sequoyah is seen Oct. 12 on the grounds of Sequoyah’s Cabin Museum in Sallisaw. Principal Chief Chuck Hoskin Jr. signed a proclamation declaring Oct. 15 be named in honor of the 200th anniversary of the syllabary’s creation. 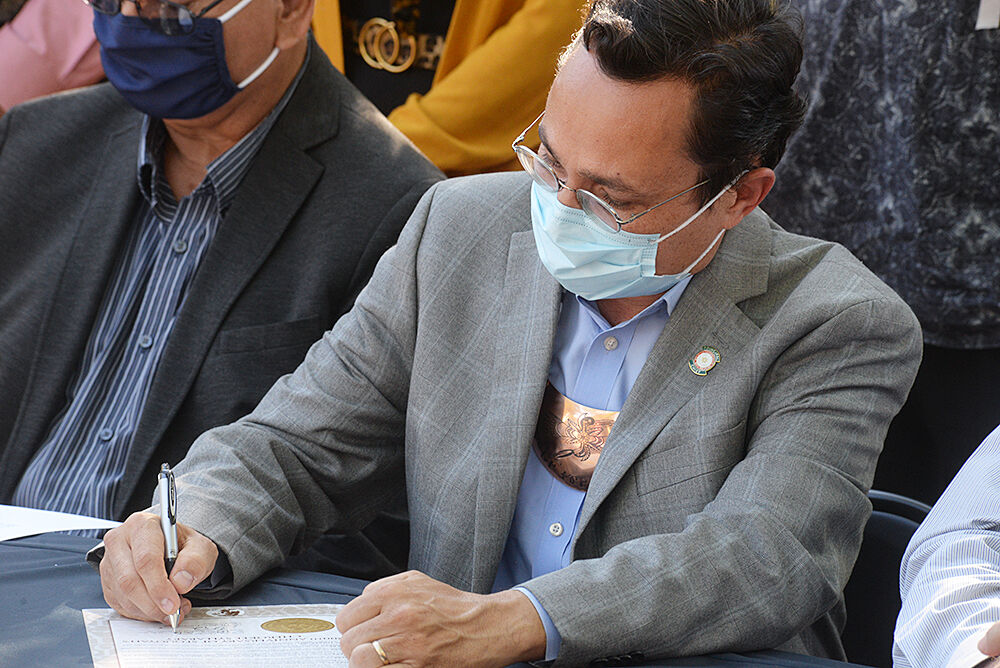 A statue of Cherokee syllabary inventor Sequoyah is seen Oct. 12 on the grounds of Sequoyah’s Cabin Museum in Sallisaw. Principal Chief Chuck Hoskin Jr. signed a proclamation declaring Oct. 15 be named in honor of the 200th anniversary of the syllabary’s creation.

SALLISAW – On the picturesque grounds of Sequoyah’s Cabin Museum in Sallisaw, Cherokee Nation leaders met Oct. 12 to celebrate via a formal proclamation 200 years of the tribe’s written language.

“The greatest weapon, or shield, that we were ever given are two things – the language given to us by our Creator and the written language given to us by one man, the genius Sequoyah,” Principal Chief Chuck Hoskin Jr. said. “Being able to write our language meant we could communicate with each other. Being able to translate our language means we could communicate with the world. I think in a very real way, had Sequoyah not invented this syllabary, we wouldn’t be here today … as a distinct people still governing ourselves in 2021. He truly changed the world for the good and we’re here to celebrate that.”

One of the most influential Cherokees, Sequoyah spent 12 years developing the written language for his people. In 1821, the CN adopted the syllabary, and within months thousands of Cherokees became literate by learning to read and write their language.

Sequoyah’s syllabary was also incorporated into the tribe’s newspaper, the Cherokee Phoenix, in 1828, making it bilingual. A variation of the syllabary is still used today by the CN.

In attendance for the proclamation signing were fluent Cherokee speakers determined to save their language.

“We have a lot of speakers here today and they’re all working on this, trying to bring every piece of paper that has this wonderful language written on it and putting it in one location,” CN Language Department Executive Director Howard Paden said. “So words that haven’t been spoke in decades can be brought back to life. We couldn’t have done that without Sequoyah.”

The official proclamation signed by Hoskin declares Oct. 15 as the 200th anniversary of the syllabary’s creation. The document itself was printed in both English and Cherokee. The special Cherokee version was typeset. According to the tribe, language experts worked with Cherokee Nation Cultural Tourism to commission the proclamation.

The proclamation, in part, reads as follows:

“Whereas, Sequoyah completed work on the Cherokee Syllabary in 1821, and the Cherokee Nation formally adopted his creation as its official written system of the Cherokee language in 1825, and;

“Whereas, upon the forced removal of the Cherokees from their homelands in the Southeastern United States in 1838 at the hands of the United States government, the Cherokee language and the Cherokee Syllabary were carried to Indian Territory and used extensively, including with the Cherokee Phoenix newspaper, which printed the first bilingual newspaper in U.S. history, and;

“Whereas, although the Cherokee language survives in 2021, only about 2,000 first-language Cherokee speakers are alive today, and;

“Whereas, this anniversary should be recognized for the immeasurable impact of Sequoyah’s Cherokee Syllabary on generations of Cherokee families, and;

“Whereas, this proclamation reaffirms the Cherokee Nation’s commitment to protecting and perpetuating the Cherokee language for generations to come;

“Now Therefore, I Chuck Hoskin Jr., Principal Chief of the Cherokee Nation proclaim this 15th day of October, 2021, be named in honor of the 200th anniversary of Sequoyah’s Cherokee Syllabary.”