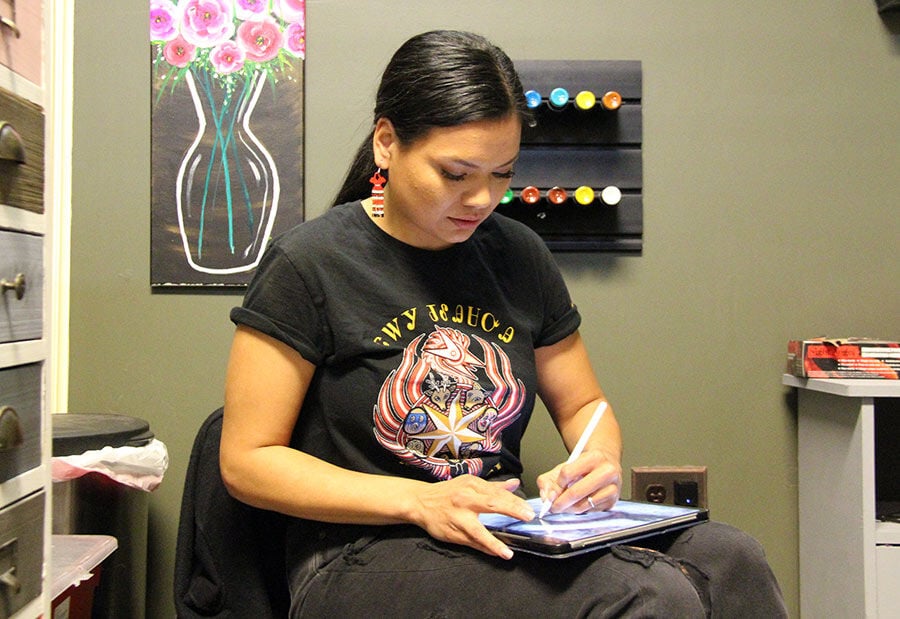 Cherokee Nation citizen and tattoo artist Nathalie Standingcloud works on a design for a client at Inkjunkys Tattoo studio on March 18 in Tulsa. 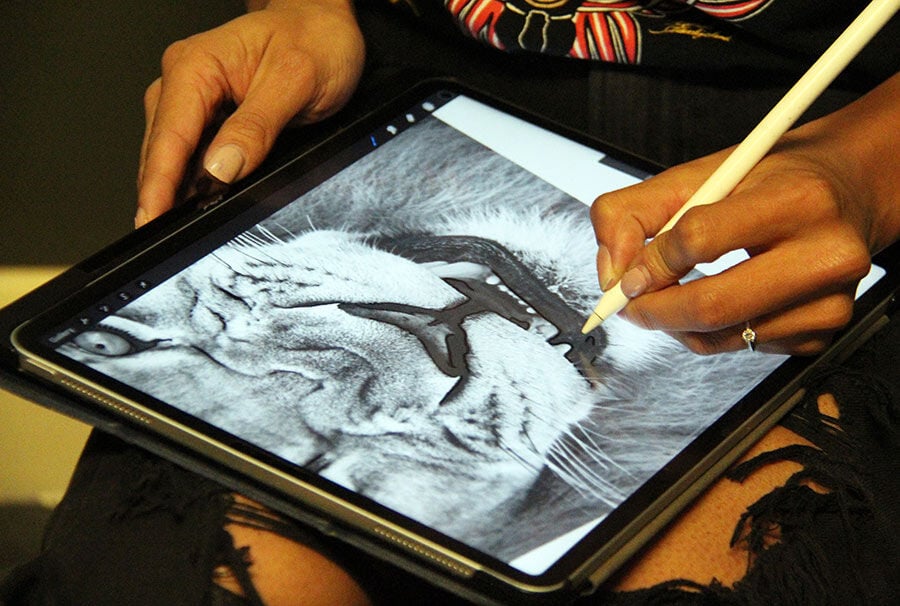 Cherokee tattoo artist Nathalie Standingcloud works on a design for a client of a realistic lion’s head. She said the tattoo was scheduled for six hours. 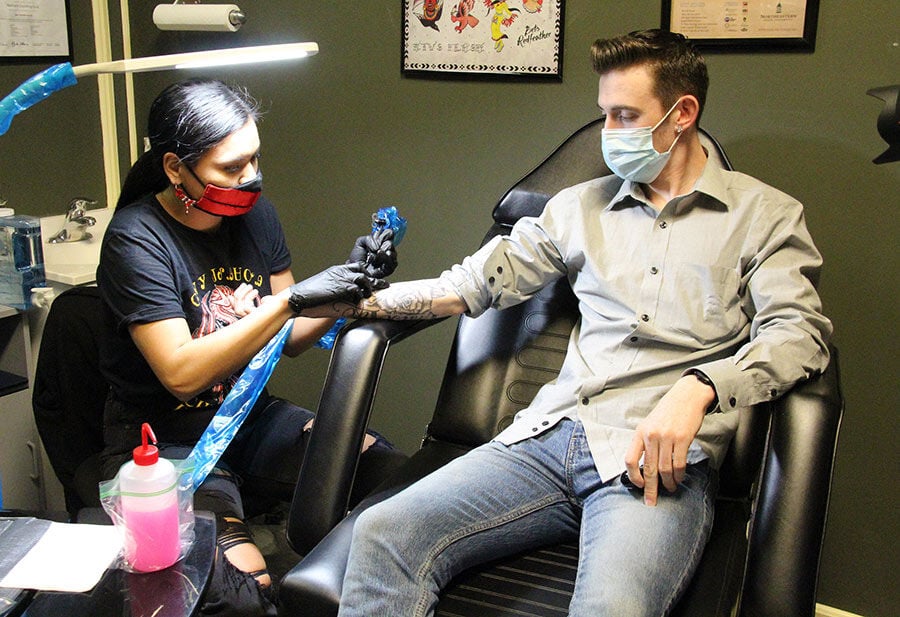 Cherokee Nation citizen and tattoo artist Nathalie Standingcloud tattoos a client on March 18, taking all necessary precautions to tattoo safely and efficiently. She works at Inkjunkys Tattoo studio in Tulsa and has been there since November.

Cherokee Nation citizen and tattoo artist Nathalie Standingcloud works on a design for a client at Inkjunkys Tattoo studio on March 18 in Tulsa.

Cherokee tattoo artist Nathalie Standingcloud works on a design for a client of a realistic lion’s head. She said the tattoo was scheduled for six hours.

Cherokee Nation citizen and tattoo artist Nathalie Standingcloud tattoos a client on March 18, taking all necessary precautions to tattoo safely and efficiently. She works at Inkjunkys Tattoo studio in Tulsa and has been there since November.

TULSA – Cherokee Nation citizen Nathalie Standingcloud took up tattooing four years ago to add to her artistic repertoire. She said she’s has always been an artist, beginning young but not really taking it seriously until she was in college.

“I grew up being left-handed, which is kind of different. A lot of people say left-handed people are kind of artsy-fartsy out there,” she said. “It wasn’t until high school that I really started drawing a lot more, but I didn’t take any art classes. It wasn’t until I hit college that I realized I should have taken those art classes and learn the techniques and learn the history and everything.”

Her initial tattoo work was drawing on friends and herself with markers, and getting in trouble by teachers for doing so.

“One time in class I was drawing on myself,” she said. “I drew this robotic arm with Sharpies and I got in trouble by my teacher, which is funny because years down the line I ended up tattooing that same teacher that got onto me. So it kind of came full circle.”

She said tattooing came into her life when she started getting to know her father, who is also a tattoo artist. She became intrigued by his work and he encouraged her interest.

“I was curious to know how you do the tattoos, I wanted to watch and learn,” she said. “He was like ‘Here take the machine, we’ll put it in your hand and we’ll see how you do.’ I really liked the feel of it. I got the hang of it pretty fast. My father pushed me to get licensed, too. It wasn’t just me making that decision. But I wanted to be professional if this is what I was going to do because it’s permanent, it’s for life.”

She then took on a two-year apprenticeship and worked at River City Tattoo in Tahlequah for a few years. In November, she began working at Inkjunkys Tattoo in Tulsa with veteran tattoo artists Mel D and Bret Blevins.

“Mel D has been tattooing for over 40 years. He’s the tattoo wizard and he has been teaching me so much every day,” she said. “Bret’s like a brother to me and we just laugh and support each other. It’s a great family environment, no judgment, just love. It’s great.”

Standingcloud’s tattoo artistry has changed a lot since starting, she said. She initially took on every client to gain experience.

She is also “dabbling” in different styles such as American traditional tattooing and the use of bold lines. She said she has done a lot of plant matter and animals images and wants to learn more styles and take on different imagery.

“I kind of dabble in all kinds of different areas,” she said. “Tattoos are specific to the person. So everybody has their own story, their own ideas and stuff and I take the time to talk to them and have that conversation. Hopefully bring their artistic ideas to life.” When it comes to Cherokee-based tattoos, she likes to educate clients on the history and background specific to Cherokee culture.

“In the beginning, I had to tattoo what I could tattoo,” she said. “I said yes to everything because it just meant I had a job at the time. Now that I’m in a place where I can say no in a confident matter, I’m able to really filter what I want to put my name with. So when people come in and they have this idea of what Cherokee might be and usually it’s like a pan-Indian image of like a headdress or a dreamcatcher or teepees, and those aren’t necessarily Cherokee. So I take that opportunity to try and educate them if they’re open to listening and hopefully I can steer them in the right direction and get something that’s authentically Cherokee.”

“It wasn’t until I got this iPad, maybe two years ago, that it changed up the game for me,” she said. “Of course it’s all art, you know. The tools and everything have changed it made the game just so different and fun. I love it. It makes my job so much easier. If any artist out there can get their hands on an iPad, go for it.”

She said she never thought that her artwork could become a career.

“I always knew I was good at artwork, but I never really thought I could make a career out of it. I didn’t think anybody would pay money for a piece of paper,” she said. “When it comes to tattooing, that’s a luxury. You can’t sell that tattoo once it’s on your body. It’s very special to me. It’s artwork for life. It’s with you until you die. It’s such an identifier. It’s a story. It’s self-expression. It’s beautiful and I just love it.”

Standingcloud’s tattoo pricing is based per hour. For information, visit Inkjunkys Tattoo on Facebook or call 918-615-3310.