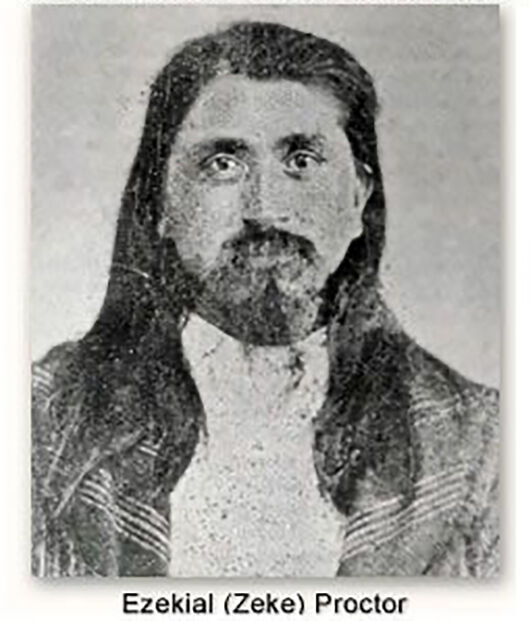 Cherokee Nation citizen Ezekial “Zeke” Proctor was born July 4, 1831, in Georgia in the old Cherokee Nation. He fought with the Union during the American Civil War. His trial for shooting and killing Polly Beck in 1872 set off a jurisdictional battle between the CN and the United States. 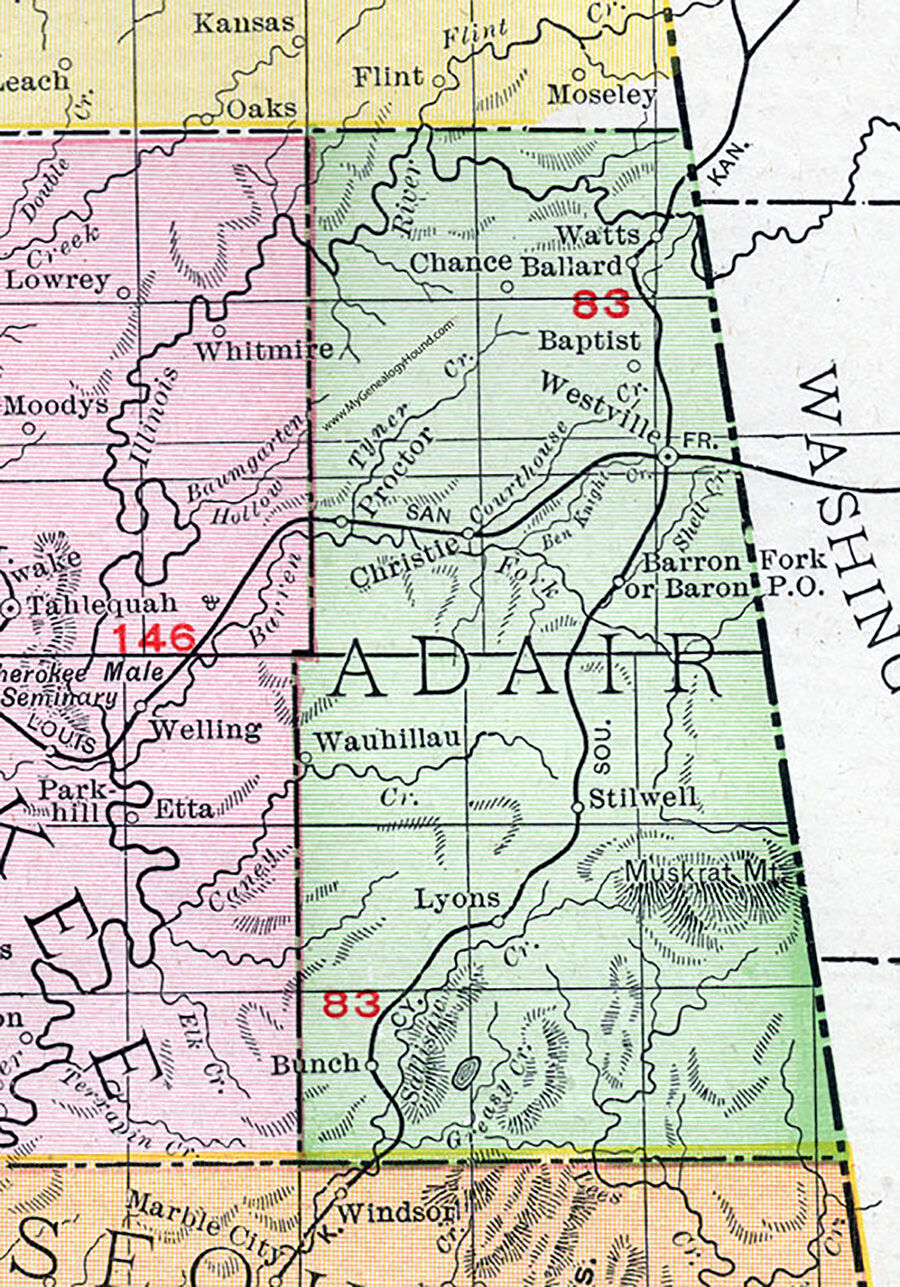 A Rand McNally map from 1911 shows the location of the Cherokee Nation relative to Arkansas. It also shows the community of Christie, in what is now Adair County. A major gun battle between CN citizens and a U.S. Marshal posse took place near Christie on April 15, 1872.

Cherokee Nation citizen Ezekial “Zeke” Proctor was born July 4, 1831, in Georgia in the old Cherokee Nation. He fought with the Union during the American Civil War. His trial for shooting and killing Polly Beck in 1872 set off a jurisdictional battle between the CN and the United States.

A Rand McNally map from 1911 shows the location of the Cherokee Nation relative to Arkansas. It also shows the community of Christie, in what is now Adair County. A major gun battle between CN citizens and a U.S. Marshal posse took place near Christie on April 15, 1872.

FORT SMITH, Ark. – The deadliest day in U.S. Marshal Service history took place April 15, 1872, near the town of Christie in Adair County, which was located in the Cherokee Nation’s Goingsnake District.

The gunfight between a marshal posse and CN citizens took place at a schoolhouse being used as a courthouse to try the case of CN citizen Ezekial “Zeke” Proctor.

“This is definitely one of the stories the museum wants to tell…not just from the marshal’s side of it but from the Cherokee Nation’s side of it because we really want to find the whats and whys and hows, and there’s a reason we refer to this as ‘The Tragedy of Goingsnake’ and not ‘The Goingsnake Massacre,’ David Kennedy, U.S. Marshals Museum in Fort Smith curator, said. “This was the bloodiest gunfight that ever took place in the American west that the military wasn’t involved in.”

Deputy Marshal Jacob Owens and a posse had ridden into the CN from nearby Fort Smith with a warrant to arrest Proctor for assaulting a U.S. citizen. At this time the CN still held its land in northeastern Oklahoma and Cherokee people were only tribal citizens.

In the CN court, Proctor was being tried for fatally shooting CN citizen Polly Beck and wounding her husband Jim Kesterson, a U.S. citizen, on Feb. 13, 1872. For personal and political reasons, the trial was highly charged because of strong family ties between the accused and victims and because of a jurisdictional issue. The U.S. District Court for the Western District of Arkansas in Fort Smith had limited jurisdiction in Indian Territory, but said it had jurisdiction to prosecute Proctor for his attack on the non-Native, although the incident occurred within the CN. The court had jurisdiction over non-Native federal crimes in Indian Territory, and all federal crimes in western Arkansas.

The shooting of Beck and Kesterson took place at the Hildebrand Mill near what is now Colcord in Delaware County. Hard feelings from the forced removal of Cherokees from their eastern lands 34 years before and the American Civil War that ended seven years before and family disagreements were part of the volatile mixture before the shooting took place, Kennedy said.

He said Kesterson was previously married to Proctor’s sister and they had several children. Kesterson abandoned his wife and children, leaving them destitute, which angered Proctor. He later learned Kesterson had married Beck and was helping her operate the Hildebrand Mill.

“They were running it as a successful business,’ Kennedy said. “It was a center of business and commerce throughout this region of the Cherokee Nation. A lot of people would grow their crops, corn or grain or whatever, and they would take it to Hildebrand Mill and have it ground down.”

It is believed, Kennedy said, that Proctor went to the mill to confront Kesterson about leaving his sister and their children. Also, Proctor knew Beck due to business previous transactions, and by one account, had once been attracted to her.

“One thing leads to another. By the time he left shots had been fired and Proctor had shot Polly Beck and injured Jim Kesterson,” he said. “There are stories that say Polly Beck had seen the gun come out and jumped in front of her husband and takes the bullet for Jim.”

After the shooting, Proctor turned himself into Jack Wright, the sheriff for the Goingsnake District. Wright holds Proctor for Beck’s murder. U.S. deputy marshals later arrive to take Proctor to Fort Smith, but Wright refuses to hand him over because Proctor is a CN citizen and the marshals do not have the proper paperwork.

Kennedy said Kesterson, because he had been married to Beck, was legally a CN citizen, which would have required Proctor’s case to be tried in a CN court because all parties involved were CN citizens. Believing a CN court would find Proctor not guilty, Kesterson gave up his CN citizenship, so a warrant was sworn out on April 11, 1872, against Proctor for assaulting a U.S. citizen.

The U.S. District Court assigned two U.S. deputy marshals to lead an eight-man federal posse to attend the April 15 trial. Five Beck clan members accompanied them. If Proctor was acquitted by the Cherokee court, the marshals were ordered to arrest him on federal charges in the attack on Kesterton and bring him back to Fort Smith for trial.

Due to the strong emotions related to the case, the trial was moved to a schoolhouse because it was easier to defend than the district’s courthouse. Upon arriving at the schoolhouse, the 15 posse members got off their horses and began walking toward the building in columns of twos. When they get to the building’s steps stories diverge on what happened, Kennedy said.

By some accounts shots were fired from inside the schoolhouse. The account Kennedy said he believes is based on various accounts, including the tribe’s. This account states White Sut Beck kicked off the gunfight when he used his shotgun to kill Johnson Proctor, Ezekial’s brother.

Some accounts estimate 80 or so Cherokees were outside the building, Kennedy added, and “ran into the hills when the shooting started.”

“The battle goes on for five to 10 minutes, with another five to 10 minutes of mopping up. The survivors from the marshal’s party, after the first shooting goes down, they are fleeing for their lives in terror trying to get east as fast as they can. They know once they make that state line, they are going to be safe,” Kennedy said.

The wounded are taken to a nearby home belonging to the Whitmire family. Marshal Owens is severely wounded and dies the next day.

Eleven others were wounded, including Zeke Proctor and Judge Blackhawk Sixkiller.

The next day Cherokee authorities moved the trial to another location. The jury acquitted Proctor.

“So we’re at this standoff for most of the next year. The marshals want to arrest the Cherokees; the Cherokees want to arrest the marshals,” Kennedy said. “Over the course of that year, there are investigations by the Bureau of Indian Affairs, the Department of the Interior, by the Department of Justice and it gets to the point where Congress and the White House get involved. There is actually a congressional investigation.”

Eventually, President Ulysses S. Grant called for a normalization of relations with the CN.

Both sides agree. No one is charged in the killings of the deputy marshals.

Zeke Proctor returned to live in the area, and by the 1880s he owned a small ranch. He was elected a Cherokee senator in 1877, and in 1894 was elected sheriff of the tribe’s Flint District. He served as a deputy U.S. marshal from 1891-94, under federal judge Isaac Parker, who had been in office during the Goingsnake shooting. Proctor died Feb. 23, 1907, at age 76. He is buried at the Johnson Cemetery in West Siloam Springs.