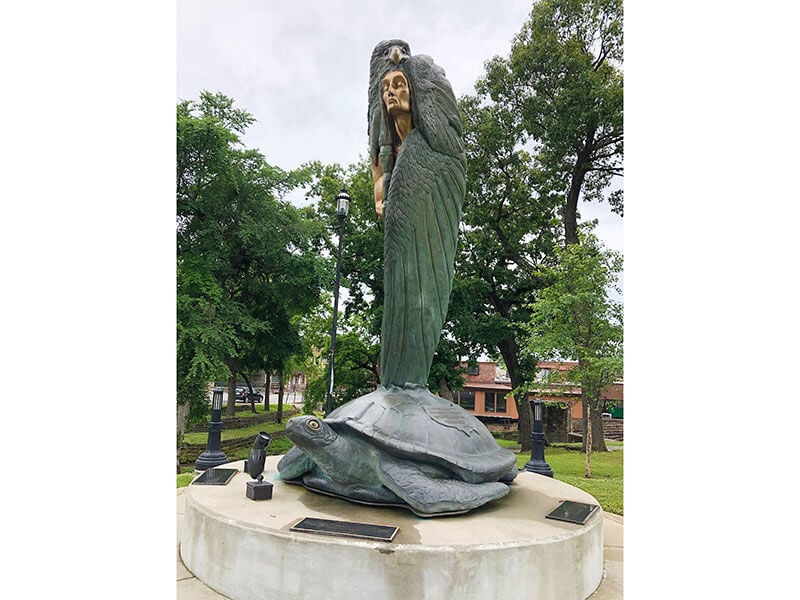 Student leaders representing five Native American organizations at Northeastern State University in Tahlequah are asking for the removal of the “Monument to Forgiveness” from the campus. 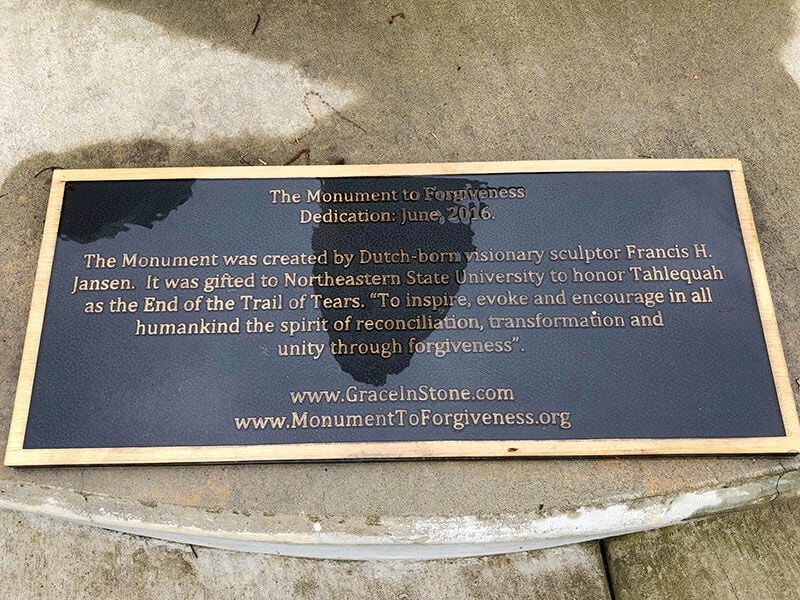 The “Monument to Forgiveness” was dedicated on the Northeastern State University Tahlequah campus in June 2016. It was meant to promote healing at the end of the Trail of Tears. 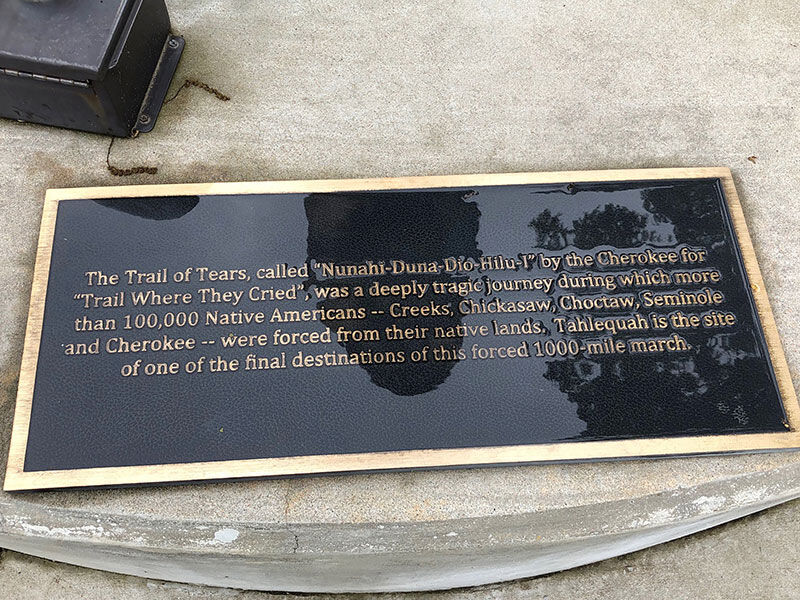 The “Monument to Forgiveness” lists some of the tribes, including the Cherokee, that were forced from their lands and moved to Indian Territory, now Oklahoma.

Student leaders representing five Native American organizations at Northeastern State University in Tahlequah are asking for the removal of the “Monument to Forgiveness” from the campus.

The “Monument to Forgiveness” was dedicated on the Northeastern State University Tahlequah campus in June 2016. It was meant to promote healing at the end of the Trail of Tears.

The “Monument to Forgiveness” lists some of the tribes, including the Cherokee, that were forced from their lands and moved to Indian Territory, now Oklahoma.

TAHLEQUAH – Student leaders representing five Native American organizations at Northeastern State University are asking for the removal of a monument on the campus’s southern edge.

In an open letter, the organizations wrote that the monument “contributes to the ongoing idea that Natives are only living stereotypes rather than successful students, artists, storytellers, and so much more.”

Dutch-born sculptor Francis Jansen created the “Monument to Forgiveness.” It was first placed on the NSU campus in 2001 where it stayed for a little more than a year. In 2016, the artist donated a 15-foot tall bronze replica of her original marble statue to NSU. It depicts an Eagle Man standing atop a turtle base at the end of the Trail of Tears.

Recent NSU graduate Jessica Frazier, who is Mississippi Choctaw/Kialegee, is president of the Theta Chapter of Alpha Pi Omega sorority at NSU. She said it seems like the statue has always been there, but this year the Native organizations at NSU could no longer ignore its presence.

“This school year we decided to take action and actually advocate for its removal,” she said.

She said what bothers her about the statue is that a non-Native person created it.

“Its intention was to make Natives forgive the artist as well as her ancestors and just white people in general,” she said. “Natives are a lot more than trauma, and that’s something I’ve tried to get across. We’re also scholars. We’re graduating with our degrees, graduating with our master’s degrees. We’re so much more successful than those stereotypes and misconceptions that are out there about us.”

She said she believes support from NSU administration has not been there for Native students. “We (Native students) want to feel reflected on our campus. We really do love the support we’ve been able to gain from the Native community and our own major departments. We want to feel supported. Removing the statue would be a great way to do all of that.”

Dan Mabery, vice president for university relations, said on May 14 that a group of five students and two spring graduates, representing various student organizations approached the university regarding their perspectives of the statue.

At the conclusion of the meeting, Mabery said NSU President Turner “wants to be very thoughtful and take all perspectives of the monument into consideration.”

“There is substantial documentation where many have a positive perspective of the monument, including support from the City of Tahlequah and the Cherokee Nation,” Mabery said. “NSU is committed to respecting the diverse viewpoints of our students and community.”

NSU senior and Cherokee Nation citizen Trey Pritchett, who is president of the Epsilon Chapter of Phi Sigma Nu, said he got involved after seeing his “Native brothers and sisters on campus standing up for something they believe in.’

“I wanted to back them up and support them,” he said. “Now that I stop and think about it, I don’t know if removal of the statue is the best way to go. We want it removed, and that’s what they’re calling for, but I’m not as big on removal. I’m big on them (NSU administration) listening to us and being willing to work with us.”

He said he hopes more interaction will occur between the Native student groups and NSU administration, and that the students won’t be “spoken down to.”

Choctaw Nation citizen Kaleb Standridge, vice president of the Native American Student Association, said the monument has been an issue for Native students since he started attending NSU in 2018.

“Over the years it has grown into a bigger issue,” he said. “So when I became vice president I decided to see if the other Native American organizations wanted to do something about it and they did. We’ve formed a committee and drafted a letter and that was the start of it.”

The monument’s features bother him the most. He said it’s obvious someone who has never seen or been around Native Americans or their culture created it.

“I think that can be extremely harmful for our community and for people who are struggling with their identity,” he said. “We’ve talked about the harmful history of it, the idea of a non-Native controlling the appearance of how a Native person should look. We talked about the plaques and how they are not quite accurate in the way they depict the history of the tribes and representing the (Cherokee) language.”

“The artist is not directly impacted by the tragedies the artist and her ancestors seek forgiveness for,” the letter states. “Many of our families and community members still suffer great generational trauma as a result of hundreds of years of colonization and oppression. Our communities and families are in the process of healing and this monument is not an accurate representation of the collective effort Indigenous people have put into healing from historical and contemporary trauma.”

The students are also working on a petition to have the monument removed. Its link is http://bit.ly/removemonument.