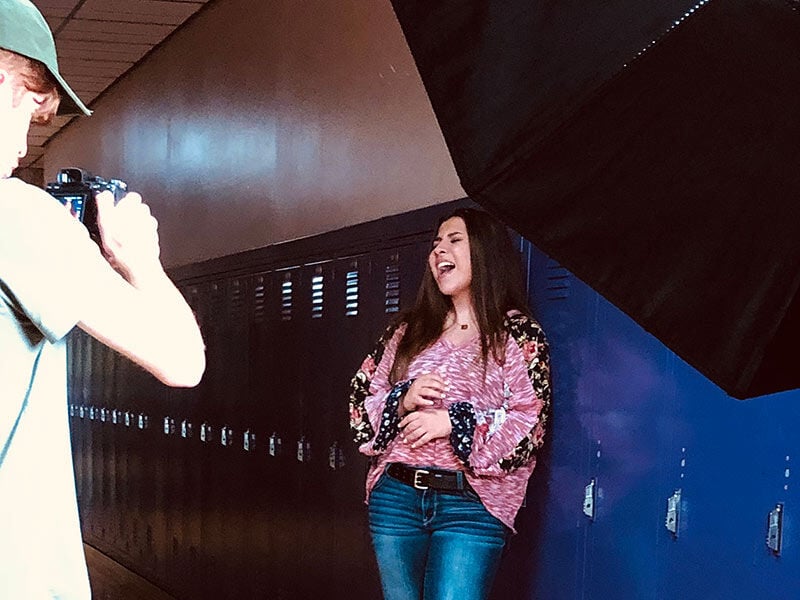 Ava Rose Johnson is recorded by Josiah Clark for the video of Johnson’s single “There’s a Boy.” 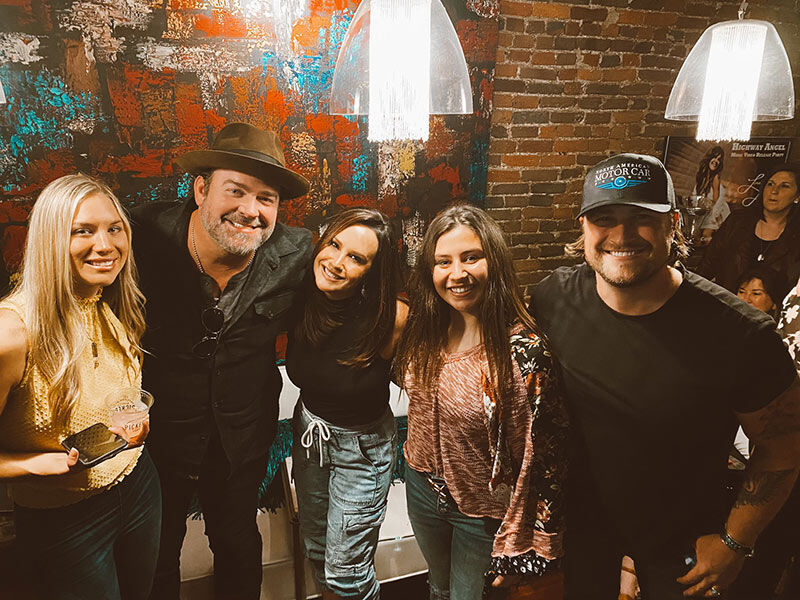 Ava Rose Johnson was in Nashville for the CD release from Allie Collins – the daughter of Garth Brooks. Johnson, second from the right, is with artist-songwriter De’Leah Shane, country artist Lee Brice, his wife Sarah and country artist Billy Dawson.

Ava Rose Johnson is recorded by Josiah Clark for the video of Johnson’s single “There’s a Boy.”

Ava Rose Johnson was in Nashville for the CD release from Allie Collins – the daughter of Garth Brooks. Johnson, second from the right, is with artist-songwriter De’Leah Shane, country artist Lee Brice, his wife Sarah and country artist Billy Dawson.

EUFAULA – Fans of singer Ava Rose Johnson should be hearing some new music from the Osage and Cherokee citizen in the coming months.

Johnson, a singing prodigy who has turned heads in Nashville’s country music scene, made a trip to “Music City” in April to record in the studio of Grady Saxman, a percussionist whose long resume includes drumming for Luke Combs.

“We started a few weeks before by me singing and recording the song while playing the piano with the tune I had set for it,” Johnson said. “Then my producer, Billy Dawson, sent it out to the band that would be ‘tracking’ my songs. They put the music notes on the paper and were ready to track the songs.”

If there is any endorsement of Johnson’s anticipated breakout, it is the long list of musicians wishing to get her music recorded and out to the public.

“I’ve been so blessed to work with so many talented artists, and I am only 14 years old,” she said.

Saxman served as drummer for Johnson’s new single, and directed the band. Josh Soko of Big Moose Productions was sound engineer. There was an abundance of experience in the booth.

“While in Saxman Studio, I had the privilege of working with Chris Condon, who played guitar for my latest songs, including ‘There’s A Boy,’” Johnson said. “Chris is currently the guitarist and musical director for Billy Ray Cyrus. Luke Moseley played the keys for me in Saxman Studio. He has worked with Chris Tomlin, Casting Crowns, Lauren Alaina, For King and Country and Francesca Battistelli…. Devin Malone played acoustic and bouzouki for me, sitting next to me while I was recording the tracks for the band at Saxman. His session credits include Keith Urban, Carrie Underwood, Sam Hunt and Dustin Lynch. Tim Denbo, played bass guitar for me and my songs, also at the studio. He is a session guitarist who also played for Doug Stone, Christian Artist Mark Shultz and has played for and toured for many artists and earned a Grammy nomination.”

Johnson is due to return to Nashville to shoot a video, but she was already releasing songs and video before the pandemic. In 2019, she released the single “Heaven’s Window” and a video and was already traveling around the nation for singing engagements.

“After winning the Native American Music Award in November of 2019, I had quite a few venues scheduled,” she said. “But because of COVID it did slow down to no in-person venues.”

She was slated to perform in San Francisco for the Inter-Tribal Self Governing National Conference. It was cancelled and has now been rescheduled three times due to COVID,” Johnson said. “There were many other venues planned that were cancelled, but I was able to get some (vocal and acting) classes done virtually.

Johnson was able to perform for The Spin Awards in Atlanta in October 2020 and fly to Las Vegas and New York City for photo shoots.

“So all wasn’t a total loss during the pandemic,” she said “I also was able to sing for a few churches locally and in the northern states that were having virtual services during COVID.”

Her schedule is now starting to refill. Johnson will perform in Eagle Nest, N.M., for the Independence Day weekend, and she performs in McAlester on July 8 with the release of the “I Wish” video of Oklahoma Foster Care and Adoption. Plus, she’s still a student in Eufaula.

Johnson’s music is available on digital platforms including Spotify and Apple Music. Her videos for “Heaven’s Window” and “There’s a Boy” are on Youtube.

“If anyone is thinking about music, or wanting to get started, and maybe they get in the middle of it and don’t know what to do, I would definitely say always follow God’s will,” Johnson said. “Pray about it, and make sure you are doing what he wants you to do.”