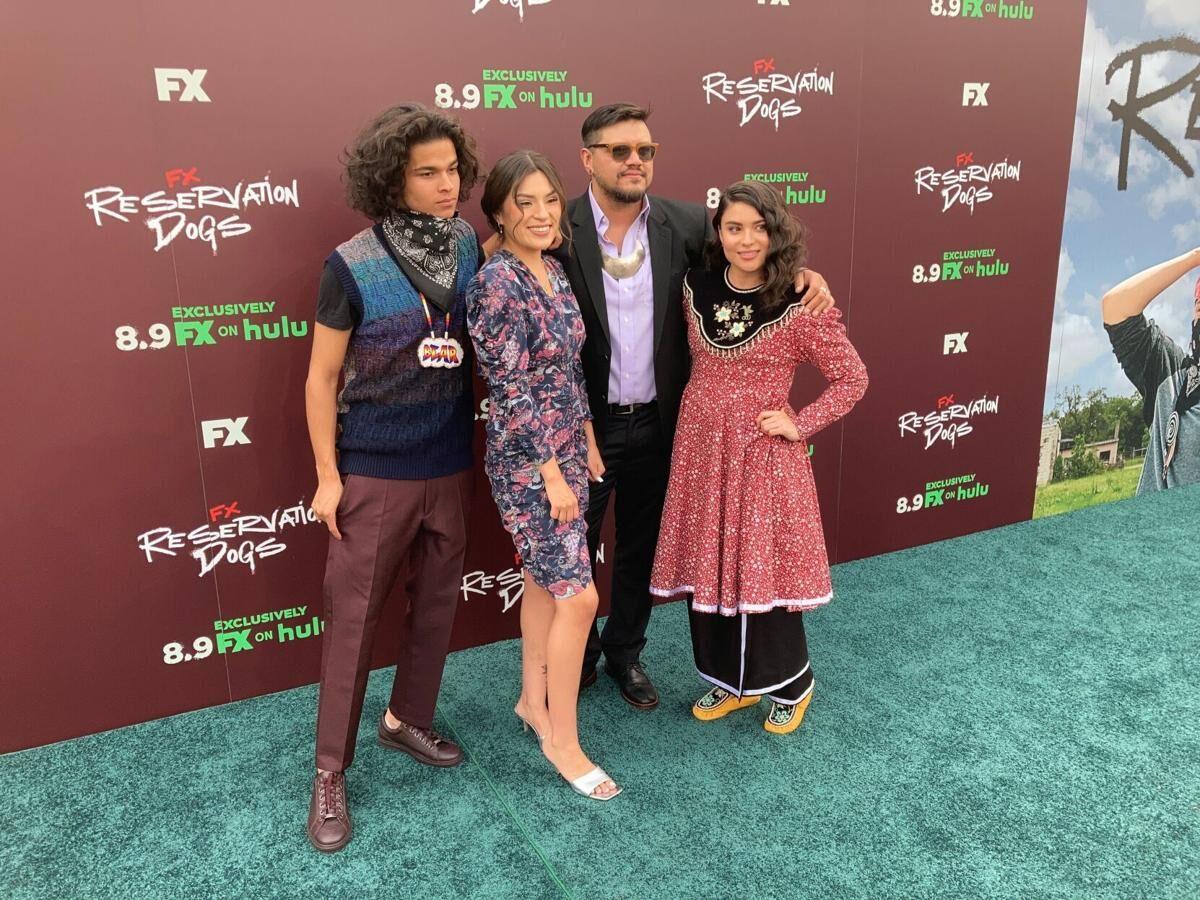 Cast members of the new FX on Hulu series “Reservation Dogs” take a photo with the co-creator of the series, Oklahoma filmmaker Sterlin Harjo, on Aug. 2 outside the Circle Cinema in Tulsa. Pictured, from left, are D’Pharaoh Woon-A-Tai, Pauline Alexis, Harjo and Devery Jacobs. 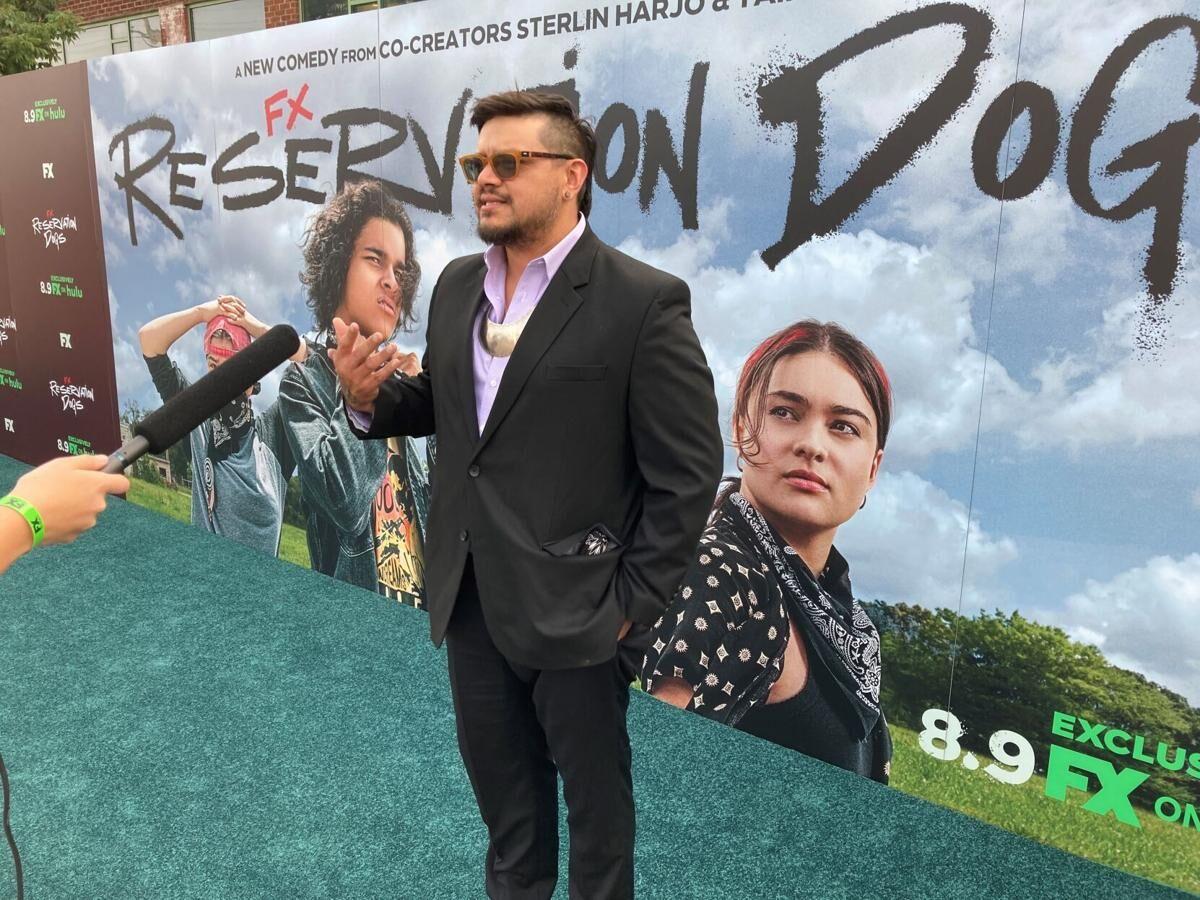 Oklahoma filmmaker Sterlin Harjo speaks to a reporter on Aug. 2 outside the Circle Cinema in Tulsa for the premier of “Reservation Dogs,” a new series premiering on FX on Hulu created by Harjo and Taika Waititi.

Cast members of the new FX on Hulu series “Reservation Dogs” take a photo with the co-creator of the series, Oklahoma filmmaker Sterlin Harjo, on Aug. 2 outside the Circle Cinema in Tulsa. Pictured, from left, are D’Pharaoh Woon-A-Tai, Pauline Alexis, Harjo and Devery Jacobs.

Oklahoma filmmaker Sterlin Harjo speaks to a reporter on Aug. 2 outside the Circle Cinema in Tulsa for the premier of “Reservation Dogs,” a new series premiering on FX on Hulu created by Harjo and Taika Waititi.

TULSA (AP) – Two Indigenous filmmakers are smashing the caricatures and stereotypes of Native Americans, who since the earliest days of film and TV have often played supporting roles or been portrayed as bloodthirsty killers standing in the way of white, westward expansion.

Sterlin Harjo, a Seminole and Muscogee filmmaker from Oklahoma, teamed up with Taika Waititi, a Maori director from New Zealand, on “Reservation Dogs,” a new series that debuted Aug. 9 on FX on Hulu that features four rough-and-tumble teenagers who cuss, fight and steal their way toward adulthood in a rural Oklahoma town. Filmed entirely on the Muscogee Nation reservation in eastern Oklahoma, the network says the half-hour comedy is the first show on cable TV in which all the writers, directors and regular characters on the series are Indigenous.

“To be able to tell a real story about real people through comedy, it’s about time,” Harjo, who directed “Mekko” and “Barking Water,” said during a premiere of the series on Aug. 2 in Tulsa. “There’s been 130-something years of cinema and we’re finally showing ourselves as human beings, which shouldn’t be radical, but it is pretty radical today.”

Devery Jacobs, a Mohawk actor from Quebec, Canada, who plays one of the show’s lead characters, said working on a set with so many Indigenous actors and crew was a breath of fresh air.

“On a lot of projects, I was the only Indigenous person for miles,” Jacobs said. “Stepping on the set of ‘Reservation Dogs’ and seeing my community around me, a community of fellow Indigenous folks from different backgrounds, it was truly being welcomed home.

“I’d never experienced it before, and it just meant so much to me, and I know it’s going to mean so much to audiences across Turtle Island and beyond,” she said, using a term many Indigenous people, mainly in the northeastern part of North America, use to refer to the continent.

Waititi and Harjo, longtime friends collaborating for the first time, said the series arose out of discussions about the kind of show they’d like to see, and before they knew it had “come up with this idea about these kids who had turned into vigilantes and wanted to clean up their community,” recalled Waititi, the Oscar-winning writer and director of “Jojo Rabbit,” whose credits also include “Thor: Ragnarok” and the TV series “What We Do in the Shadows.”

“We weren’t entirely sure where it would be and then it just struck us that setting it here would be perfect.”

Filmed mostly in the small eastern Oklahoma town of Okmulgee, where the Muscogee Nation is headquartered, the show’s restless young characters are familiar beyond Indigenous communities and small towns, Waititi and Harjo said.

“The idea of just wandering around the suburb or a small community with nothing to do, wondering what the hell’s out there for me and what am I going to do with my life,” Waititi said. “That’s the heart of what drives these kids ... a lot of teenagers all over the world, they feel like that.”

Although the characters aren’t identified as citizens of a specific Native American tribe, the Muscogee Nation was heavily involved in helping to scout locations, and a public premiere at its River Spirit Resort and Casino in Tulsa drew close to 2,000 people.

“The real value in this show and the representation is the authenticity of it,” said Jason Salsman, a Muscogee Nation spokesman. “There have been so many years and instances of invisibility, mischaracterization and misappropriation of Native culture in film and movies.”

“This is a welcome change,” he said.

Like many of the 39 federally recognized tribes in Oklahoma, the Muscogee Nation has been diversifying its economy with the help of an infusion of cash from tribal gambling approved by voters in 2004. The U.S. Supreme Court also upheld the boundaries of the Nation’s reservation – 3 million acres, including most of the city of Tulsa – in a landmark decision last year on tribal sovereignty.

The show’s production in Oklahoma comes at a time when the film and television industry is booming in the state. The Oklahoma Film and Music Office estimates the 33 film and television productions, including “Reservation Dogs,” that qualified for a state rebate on qualifying expenditures in the last year had a direct fiscal impact of more than $161 million. Other films shot in Oklahoma include Martin Scorsese’s “Killers of the Flower Moon,” “Stillwater” starring Matt Damon and this year’s Academy Award-winning film “Minari.”

Oklahoma Gov. Kevin Stitt, himself a citizen of the Cherokee Nation, signed into law earlier this year a bill that increases the cap on the film rebate from $8 million to $30 million annually, which is expected to draw more productions, diversify the state’s workforce and beef up its film infrastructure.

That’s welcome news for Oklahomans who work with the film industry, said Shane Brown, freelance photographer and videographer from Tulsa who was hired to work on “Reservation Dogs.” Brown, who is also doing photo and video work for a couple of documentaries, said he’s so busy he had to turn down job offers for work on other film productions.

“Everybody is busy,” Brown said. “All of these independent, freelance positions, just whatever you need to crew up a film, everybody seems to have work.”