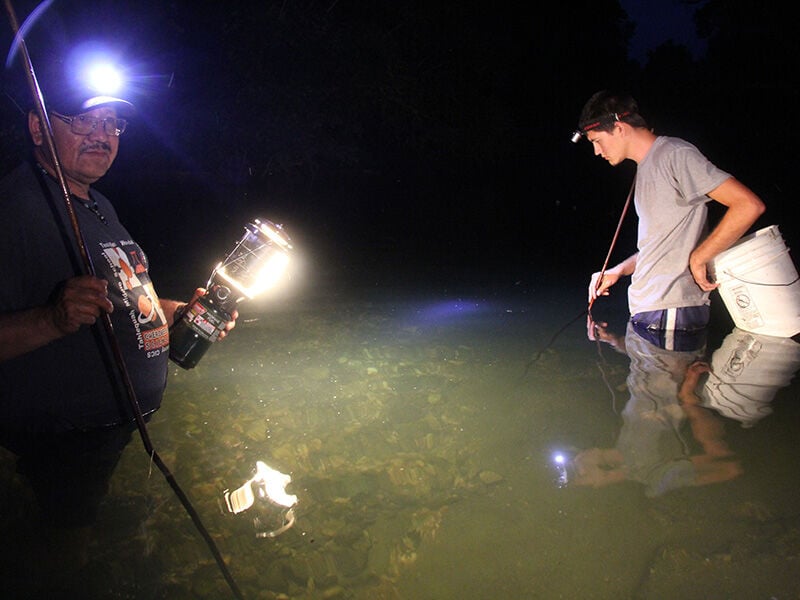 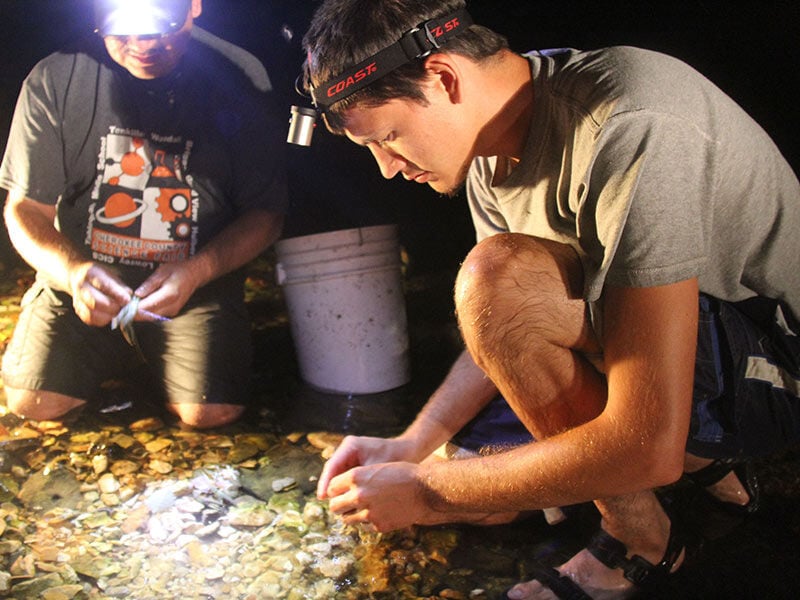 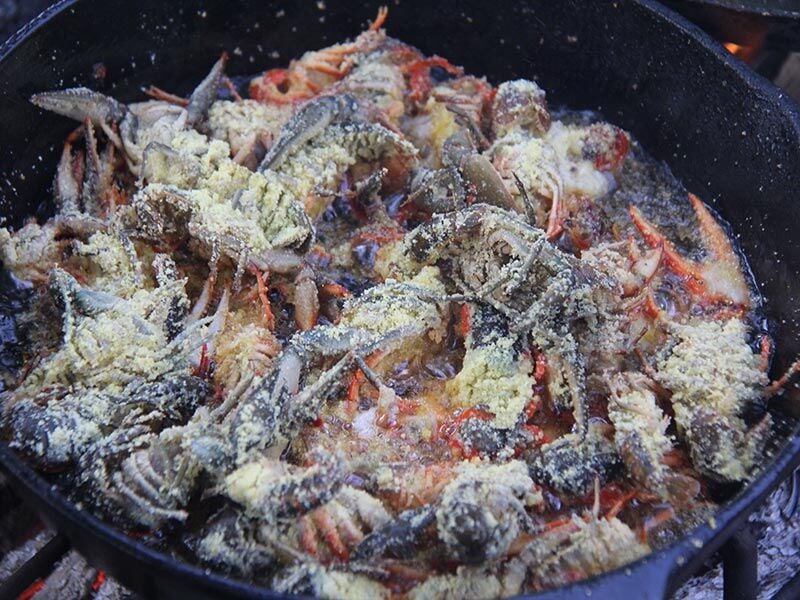 Before cooking crawdads, Larry Shade and his family soaks the cleaned crustaceans in hot water with salt. After draining them, the Shades add salt and pepper, cornmeal and then fry them in oil. JAMI MURPHY/CHEROKEE PHOENIX 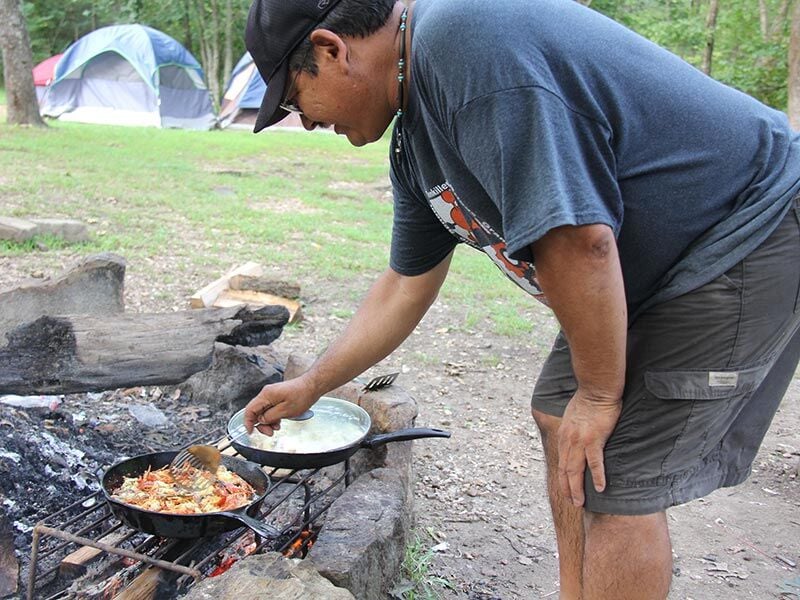 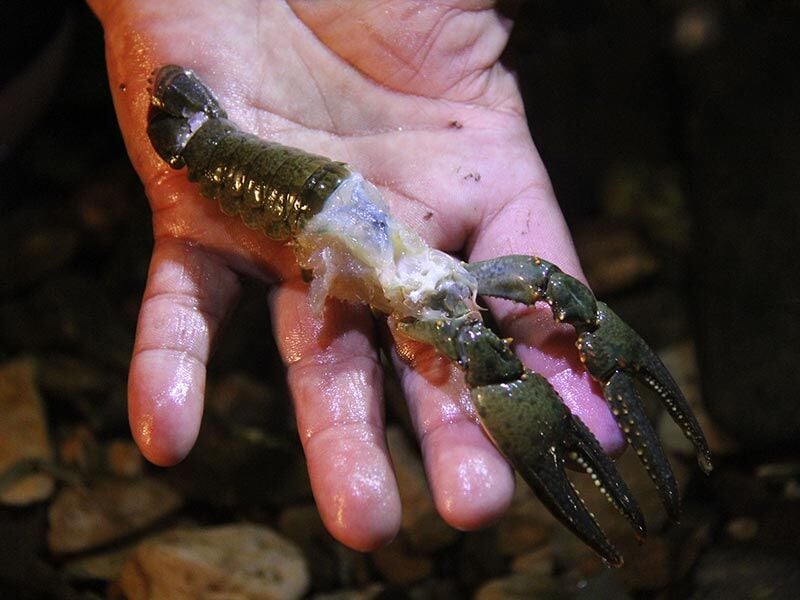 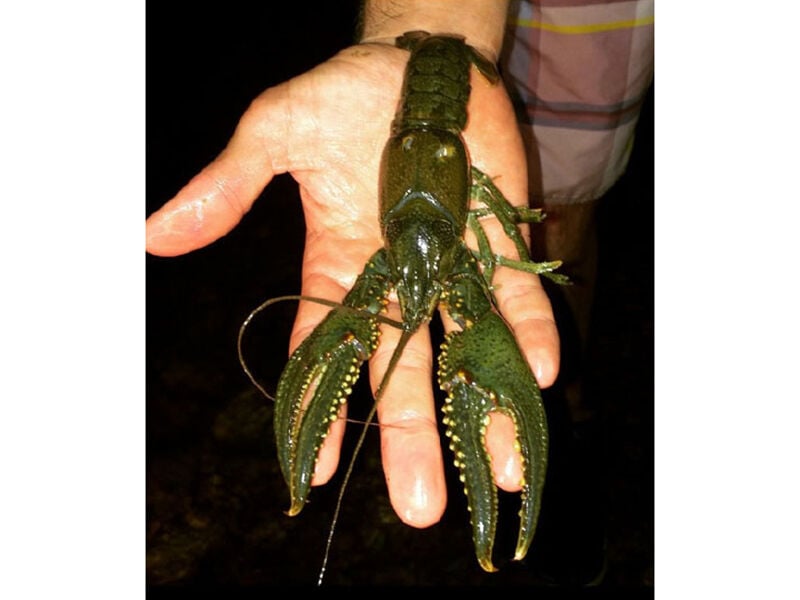 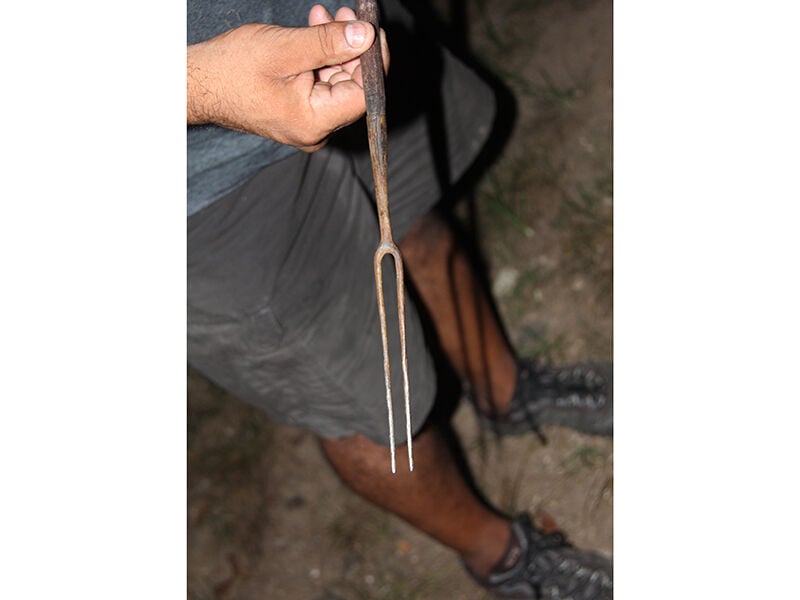 Cherokee Nation citizen Larry Shade, the son of the late Deputy Chief Hastings Shade, holds a gig made by his father more than 30 years ago. Larry continues to use the gig to hunt crawdads. JAMI MURPHY/CHEROKEE PHOENIX

Before cooking crawdads, Larry Shade and his family soaks the cleaned crustaceans in hot water with salt. After draining them, the Shades add salt and pepper, cornmeal and then fry them in oil. JAMI MURPHY/CHEROKEE PHOENIX

Cherokee Nation citizen Larry Shade, the son of the late Deputy Chief Hastings Shade, holds a gig made by his father more than 30 years ago. Larry continues to use the gig to hunt crawdads. JAMI MURPHY/CHEROKEE PHOENIX

LOST CITY, Okla. -- Cherokee Nation citizen Larry Shade has lived his life in this northern Cherokee County community learning the ways of the Cherokee culture from his grandparents and father, the late Deputy Chief Hastings Shade. Among the cultural aspects he's learned, one he truly enjoys is crawdad gigging.

Larry gigs crawdads in a section of Fourteen Mile Creek that his family owns.

"It's just something that my dad always did when we were growing up. He worked, and when he came home that was the first thing we were going to do. We'd go out in the daytime, but a lot of times we'd go out at night, which is a lot easier," he said. "It's just a time-honored tradition that we hold true to our culture."

He said many people who catch crawdads use traps, but he and his family use homemade gigs, something he also learned to do from his father.

"The gigs we are using tonight are all hand-forged by my dad. I'm in my 50s and the gigs that we're going to use, I was 18 when dad made them," he said.

Hastings died in 2010 at age 67. He was known as a Cherokee traditionalist and was widely recognized for his work in cultural preservation and as a skilled traditional artisan. He was designated a Cherokee National Treasure in 1991 for his craftsmanship, which included making gigs.

When gigging, Larry said they never catch more crawdads than they can eat. He said he and his family will determine how many crawdads they need to feed everyone and then they'll go out and catch that amount.

"We always leave some either for the next family or next year's crop, but we never take more than what we need," he said. "It's part of the Cherokee way."

He said most of the time when he and his family "get together" they go gigging the night before.

"My son, some of his friends and my daughter, we all go out and they know how," he said. "We go through whether the water is cold or it's warm, whether it's leaches or snakes. They understand there's a few dangers out there, but it's something that we've done all our lives."

The method the Shades use to catch crawdads is not the easiest, Larry said, but it's their tradition and it's how he honors the Cherokee traditions and culture.

"There a lot of easier way to get crawdads, but this is a time-honored tradition for us," he said. "I'm skilled in what I've done and it's hard for me to do something else."

Larry said he's been gigging as long as he can remember.

He said years ago catching crawdads was a way to feed one's family. It's not like that so much now, but the experience of providing for his family is something he said he would always honor and cherish.

"My grandparents did it and passed it on to my dad. And you know my grandfather, he forged his gigs, which he passed on to my dad," Larry said. "Dustin's (one of Larry's son) with me most the time and I'm glad that he's with me and I hope that he carries it on. We all won't be here...too much longer and we hope the traditions that we have...we carry on to our children and even the friends of my sons and daughters. I hope that they carry on."

Larry said if no one has ever tried gigging they are welcome to email him at larry-shade@cherokee.org.

"I more than welcome you to look me up. Give me a holler. I will definitely take you. We'll go out one night and I'll show you the cultural way," he said. "I invite all Cherokees or any tribal member. If they want to come experience a little history and a little culture."

Larry Shade and his family slowly walk through creek waters at night carrying a lamplight, a bucket and a gig. Crawdads feed at night.

The Shades catch both in shallow and deep waters. "So it just depends on where you find the crawdads. You have to go to them. They don't come to you," he said.

Larry said many people "bait" a hole the night before by throwing out "chum" or something for the crawdads to feed on and draw them with. "If I clean fish, sometimes I'll throw that in the water and that's just so the crawdad have food. I don't go back and bait the hole. What we do is we do it the sportsman way. I don't cheat nature," he said.

Larry said when gigging, get close enough to the crawdad without scaring it, stab the crawdad with the gig in the upper portion of the body because you eat the tail and you don't want to damage it. He said it's also important to make sure when hunting at night that one's light is bright enough to shine through the water and always be aware of your surroundings.

After a good catch, Larry and his family clean the crawdads, usually at the creek because it's just easier.

"The way we clean ours is we take the back part of the crawdad and pull the back part up and we clean the guts and intestines (out). And then we turn the crawdad around and we'll find the middle fin and we'll pull the middle fin. That way the intestinal track will come out. Most the time we'll tear the legs off because the edible part is the front section that we cook and we'll break up the tail part and just eat the meat in the shell."

After cleaning, he said they soak the crawdads in hot water with about one tablespoon of salt to ensure the crustaceans are clean and preserved until they're cooked.

If the Shades don't cook them that night, Larry said sometimes he'll place them in just enough water to cover each crawdad with a half teaspoon of salt in a gallon plastic bag and put them into the freezer.

When they're ready to cook, Larry said he doesn't add a whole lot to them, just a little season and cornmeal.

He said to lightly salt and pepper and add just enough cornmeal to coat each crawdad.

"Little salt and little pepper and then a little cornmeal and then we'll fry it," he said. "I know it's kind of the unhealthy way, but it's something that we've done our whole lives."