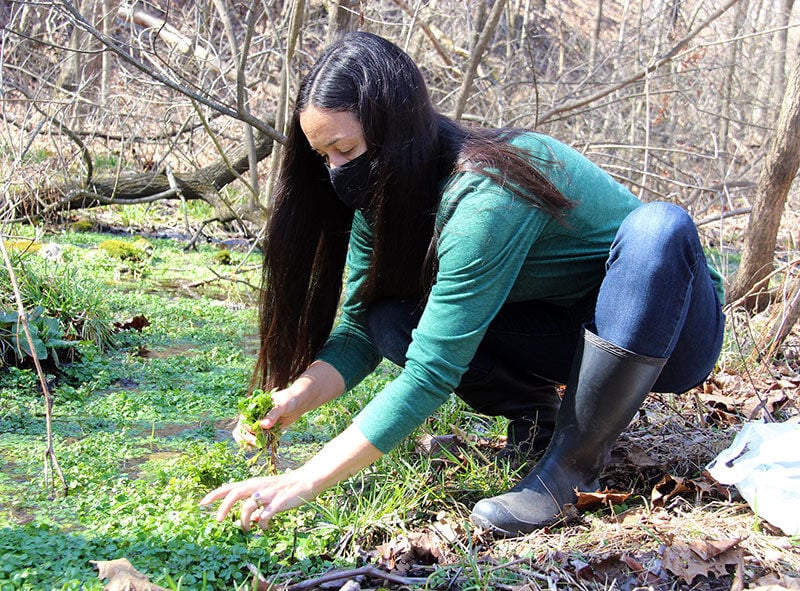 Cherokee Nation citizen Melissa Lewis gathers watercress at Beaver Creek in Bunch. She uses the plant as a food source for its nutritional value. 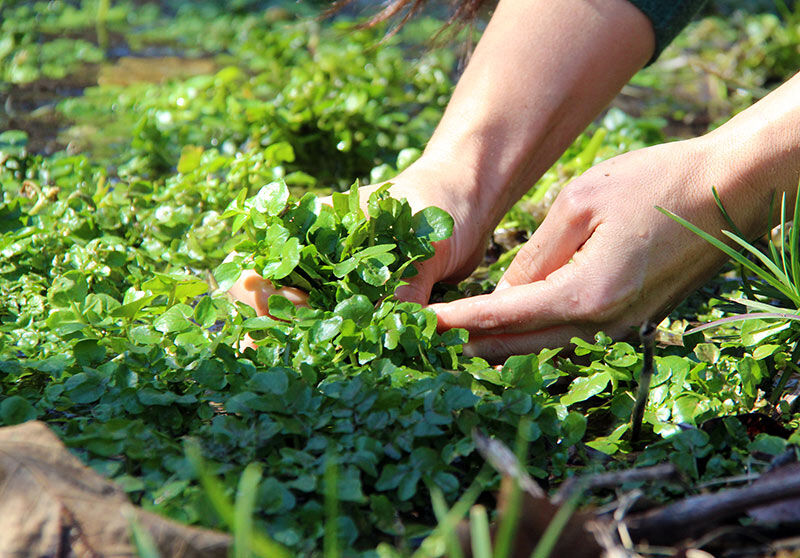 Watercress, a leafy green perennial plant, can be found in fresh water sources such as creeks or springs in the spring or summer seasons. People gather the plant as a food source.

Cherokee Nation citizen Melissa Lewis gathers watercress at Beaver Creek in Bunch. She uses the plant as a food source for its nutritional value.

Watercress, a leafy green perennial plant, can be found in fresh water sources such as creeks or springs in the spring or summer seasons. People gather the plant as a food source.

BUNCH – Watercress is yet another food staple foraged by Cherokees in the spring and summer. It is known as a super food with a high concentration of nutritional and medicinal value.

Cherokee Nation citizen Melissa Lewis gathers watercress each year to use in dishes such as smoothies and pesto.

Watercress is a leafy green perennial plant that can be found in water sources such as creeks or springs.

“Watercress is called a perennial plant so it comes back every year,” Lewis said. “I prefer to go where springs are. It can show up almost anywhere, but I try to avoid the areas that have agriculture or that have a lot of cows because of runoff and bacteria. So a place with nice clean water is the best place to collect it.”

Watercress can be found year round in some places, but the spring and summer is when it is most abundant.

“The summer is the time here, and most places that you’ll find it just the biggest and most lush,” she said. “When it starts to go to seed it has really pretty flowers. Around August it will have these really pretty white flowers.”

Watercress has a distinctive spicy taste, Lewis said. “It’s in the family that has other things like wasabi and mustards. They all have that same chemical that’s sulphur-like that gives it that spicy taste.”

Lewis said the texture is similar to spinach but the leaves are smaller and thinner.

“It’s not really chewy like purslane or thick like that. It has nice thin leaves but it has some texture. And it has leaves coming out from all angles, like a rosette. It has long roots that go into the water. When you pick it up, its kind of all clumped together with other plants around it. I pick it up and try to pull the roots out and leave them where you find them so they can continue to grow,” she said.

Lewis said watercress is not native to the United States but has been around long enough that Cherokees and non-Cherokees alike have been known to collect it. She said researchers now call it a super food due to its vitamins and minerals. “It has so many vitamins and so many minerals that relate to either the reduction or prevention of chronic diseases. One thing in particular it helps to thin blood vessels, so that’s helpful for people who are trying to prevent heart disease. But it’s also for certain cancers. It has properties that reduce those cancer cells from growing. It has a ton of vitamins. It helps with your eye health, high in vitamin K, high in vitamin C. So its good for your immunity as well. So it’s like a vitamin packed food.”

According to medicalnewstoday.com, studies show that watercress contains the antioxidant alpha-lipoic acid, which is a compound that can lower glucose levels, increase insulin sensitivity and prevent oxidative stress-induced changes in diabetics.

Watercress is a cruciferous plant native to Europe and Asia, and according to the U.S. Department of Agriculture, it contains vitamin A, vitamin B6, vitamin B12, iron, magnesium, calcium and phosphorus.

Lewis said she gathers it for several reasons but mostly for dishes.

“I like this plant because it has a great taste and it is sort of a super food. And it does grow in water so I usually collect at spring at the place that I’m collecting the watercress,” Lewis said. “A lot of people like to pour bacon grease on it and that’s pretty good. Some people put it in sandwiches. I like to be a little creative so I’ve put it in smoothies before. It doesn’t do great to be cook, is the only thing so it really does best when you eat it fresh. You can put it in salads, soups, smoothies.”

Directions: In a food processor, pulse all ingredients. Use as dip or sauce.