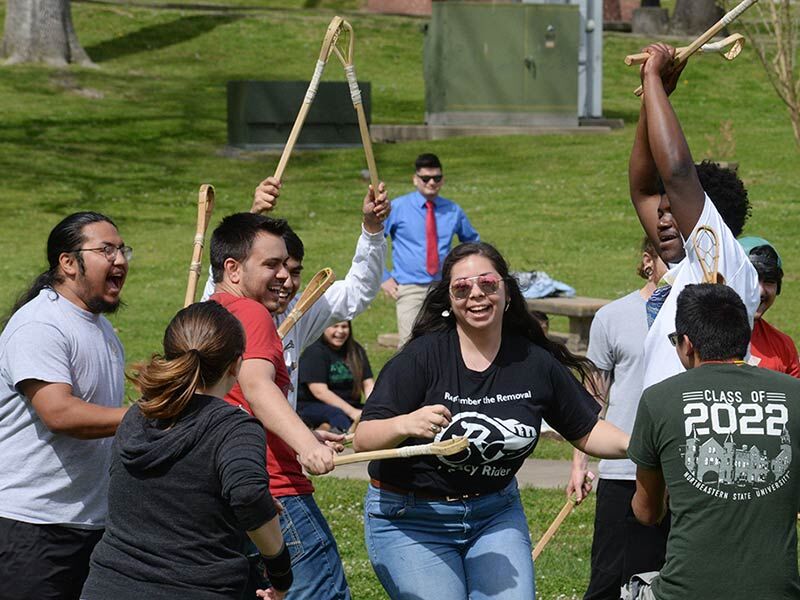 Men and women play stickball on April 12 during the 47th annual Symposium on the American Indian at Northeastern State University in Tahlequah. CHAD HUNTER/CHEROKEE PHOENIX 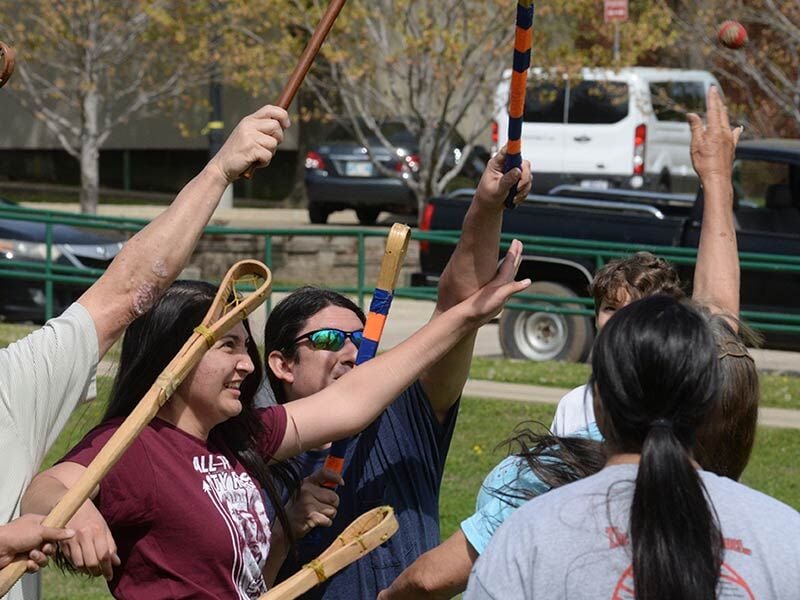 Lily Drywater, left, takes part in a stickball game on April 12 on the campus of Northeastern State University in Tahlequah. CHAD HUNTER/CHEROKEE PHOENIX 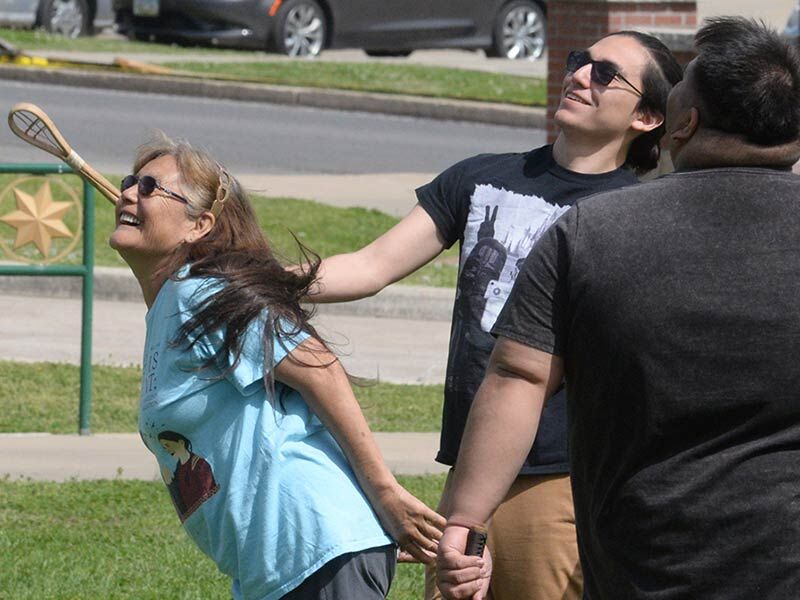 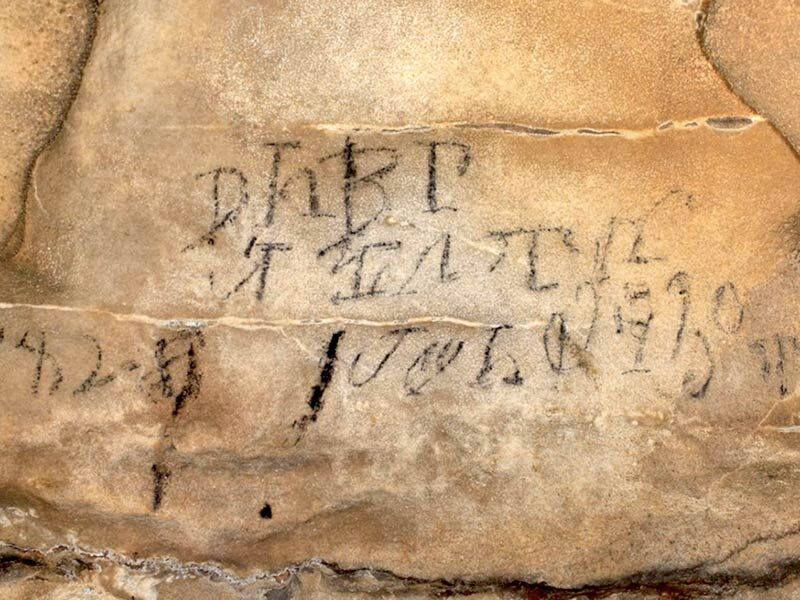 A Cherokee syllabary inscription deep inside Manitou Cave near Fort Payne, Alabama, refers to an 1828 stickball game, according to researchers. ALAN CRESSLER/ANTIQUITY 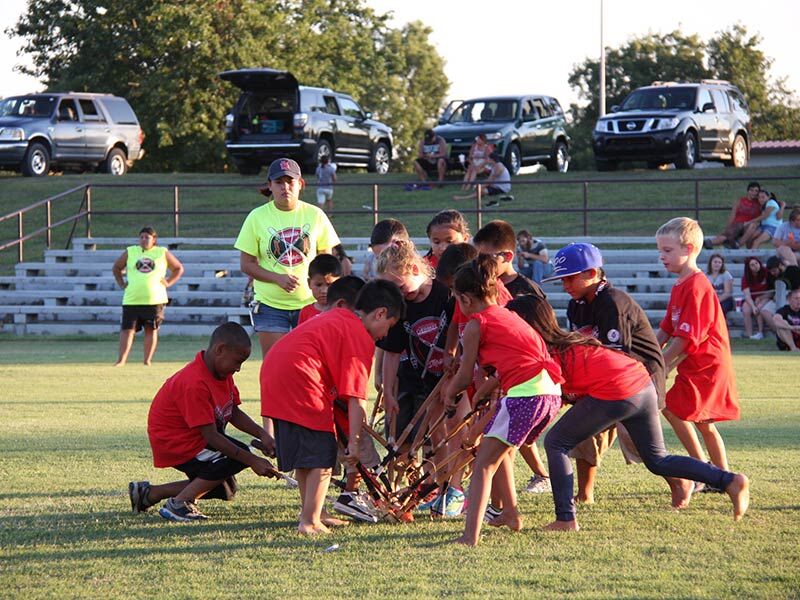 Men and women play stickball on April 12 during the 47th annual Symposium on the American Indian at Northeastern State University in Tahlequah. CHAD HUNTER/CHEROKEE PHOENIX

Lily Drywater, left, takes part in a stickball game on April 12 on the campus of Northeastern State University in Tahlequah. CHAD HUNTER/CHEROKEE PHOENIX

A Cherokee syllabary inscription deep inside Manitou Cave near Fort Payne, Alabama, refers to an 1828 stickball game, according to researchers. ALAN CRESSLER/ANTIQUITY

FORT PAYNE, Ala. -- Etched deep within an Alabama cave are Cherokee inscriptions that document sacred ceremonies surrounding a bloody stickball match played in 1828.

"The inscription implies that the leaders of one team ... commemorated their pregame activity by writing on the cave wall," an article in the April edition of Antiquity Journal reports. "Thus, this inscription records a very specific event. It is, however, more than just a memorial of the game, because, to the Cherokee, stickball was and is more than a 'game.'"

Stickball served as an alternative to tribal war in pre-European times, as described by the Cherokee Heritage Center in Park Hill.

"Although incredibly violent and fraught with danger, the death or severe injury of a few men was preferable to the more significant deaths and injuries sure to occur in full-fledged warfare," the center's overview of stickball states.

Archaeologist Beau Duke Carroll with the Tribal Historic Preservation Office of the Eastern Band of Cherokee Indians in Cherokee, North Carolina, led the research team at Alabama's Manitou Cave where the writings were etched in the Cherokee syllabary invented by scholar Sequoyah, who lived in the nearby Cherokee village of Willstown. The inscriptions indicate Cherokees involved in the game were "led and guided in their preparations by a religious leader," according to the interpretation. That leader was named as Richard Guess, believed to be Sequoyah's son.

A second inscription near the first includes three lines of text with both Cherokee and English letters.

"The centre line is the longest, comprising as many as 26 Cherokee syllabary symbols," the Antiquity Journal's authors state. "The first part of the inscription ... we read as Di-ge-ya Ne-s-ga-wo-di-ga-ho-dv-ge A-ya in Cherokee, which means 'we who are those that have blood come out of their nose and mouth.' The second part of the line ... A-yv S-ge-yv-gv-s, translates as 'I am a respectable man of authority.' The last line is a signature, in English, of one 'Richard Guess.' This engraved text therefore informs us of two things. First, that the author, Mr. RG or Richard Guess, is a leader; and second, the inscription references a group -- probably ballplayers -- whose members are wounded and bloodied in the face, that is, in a 'red condition.'"

The journal's comprehensive piece, "Talking stones: Cherokee syllabary in Manitou Cave, Alabama," notes that Cherokee writings there were first recognized by historian Marion O. Smith in 2006, then translated over time.

"The Cherokee syllabary inscriptions in Manitou Cave reflect the use of this great cavern as a place for seclusion, reflection and ceremony during perhaps the most stressful time in Cherokee history, when the people were forcibly and finally removed forever from their beloved homelands," the article notes. "Located in one of the principal Cherokee communities, the cave was used multiple times for ceremonial activity."

"My grandfather was a chief at a ceremonial ground," Cherokee language instructor Lula Elk said. "So ever since I was little, I've been stomp dancing and playing stickball. It is very important."

According to the CHC, stickball is played throughout the Cherokee Nation, "only now there's a pole in the middle of the playing grounds that's 25 feet tall, with a wooden fish on top of it instead of a goal."

"Players try to hit the fish, and get three points for each hit," the CHC notes. "Hitting the pole one foot below the fish scores a single point. Women are now allowed to play, but instead of sticks they play with their hands. The men may only use sticks, and may not hit the women. The women are under no such rules, and can tackle, hit, push or do anything necessary to get the ball. In most games of stickball, the women almost always win. Among the Eastern Band of Cherokee Indians in North Carolina, stickball is still only for men, and it is still an anything-goes sport."

A wrestler in college, Cherokee Nation citizen Caleb Hickman was raised in Oklahoma but now works for the EBCI.

"It's totally different than Oklahoma," Hickman said. "Girls aren't playing here. It's quite rough, and there's a lot of tackling and wrestling. When I saw it, I was like 'wow, where was this my whole life?' I know there are a lot of Cherokee Nation folks who would love it."

Players use sticks made by hand from hickory, according to the CN, and a small ball made of deer hair and hide.

"The game itself is important to our culture and our customs," CN citizen and stickball player Trey Pritchett said. "I also think it's important to us health-wise, the benefits of getting out here, running around and staying active. We usually play stickball at least once a month, sometimes twice. Sometimes we'll play every week."