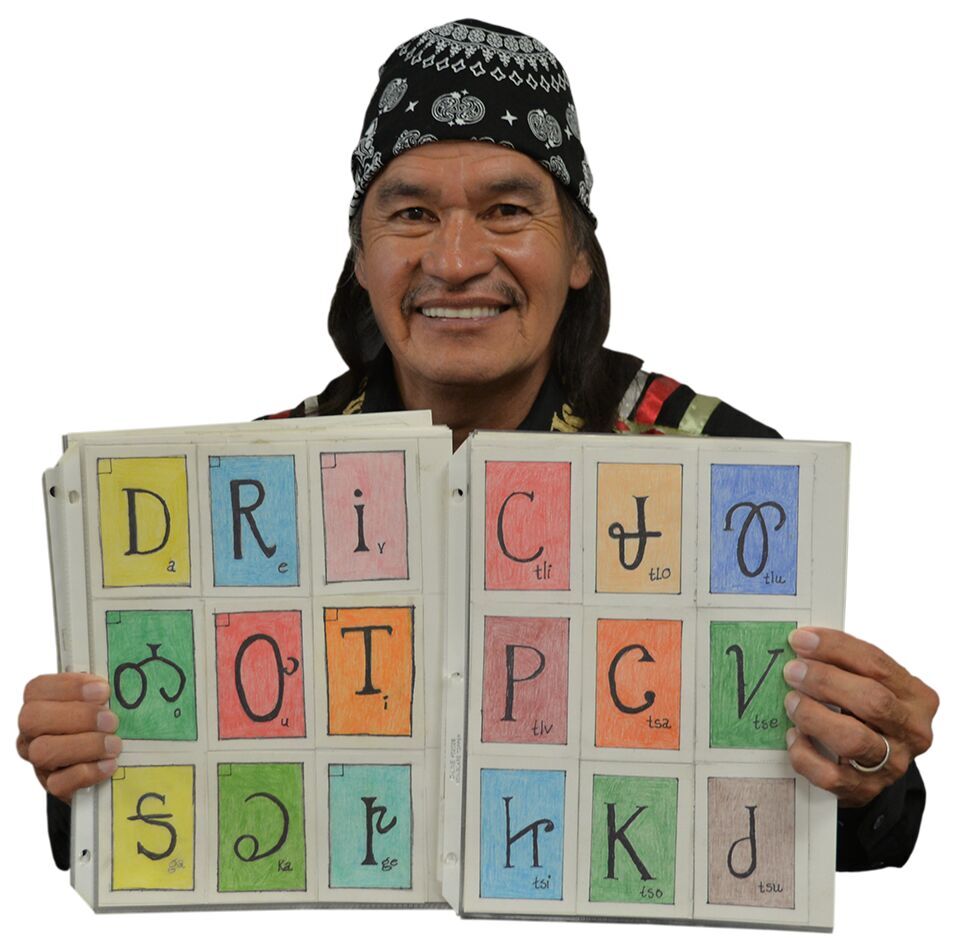 Dione Byrd, of Cherry Tree, holds prototype cards for his multi-faceted Cherokee language game. Byrd is the recipient of this year’s Seven Feathers language award presented by the Cherokee Phoenix. 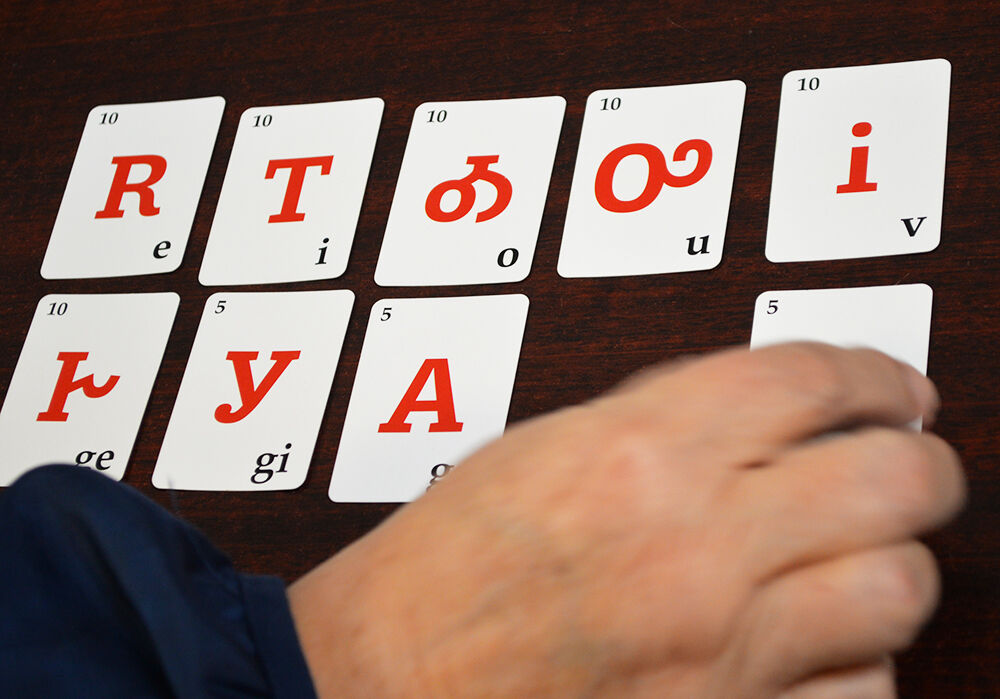 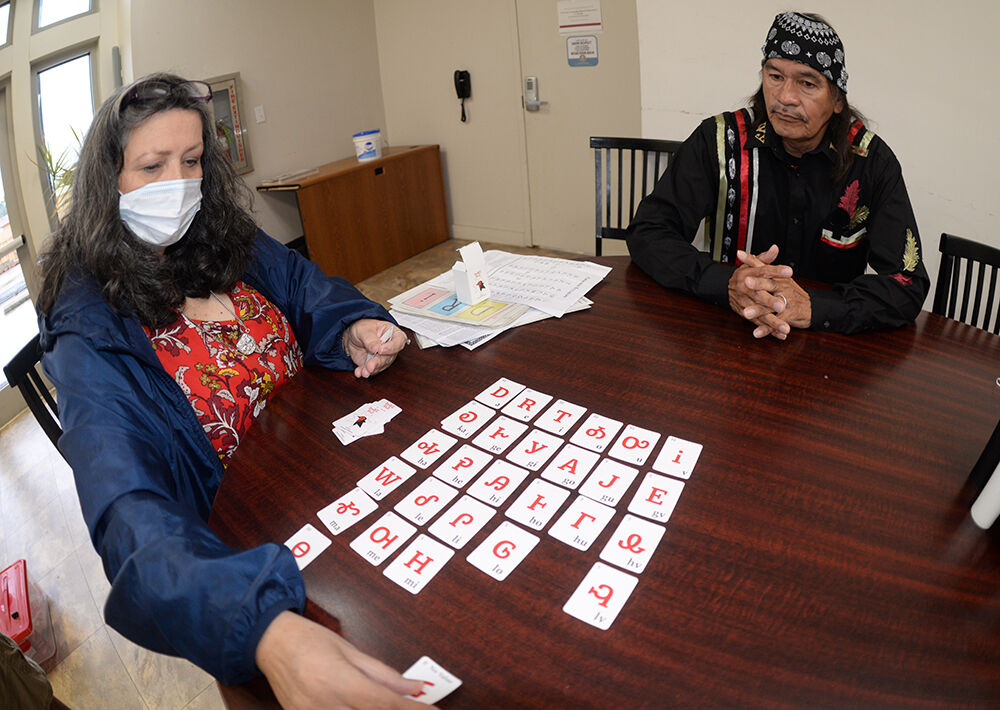 Ramona and Dione Byrd demonstrate how to play a syllabary-based card game created to help teach the Cherokee language. 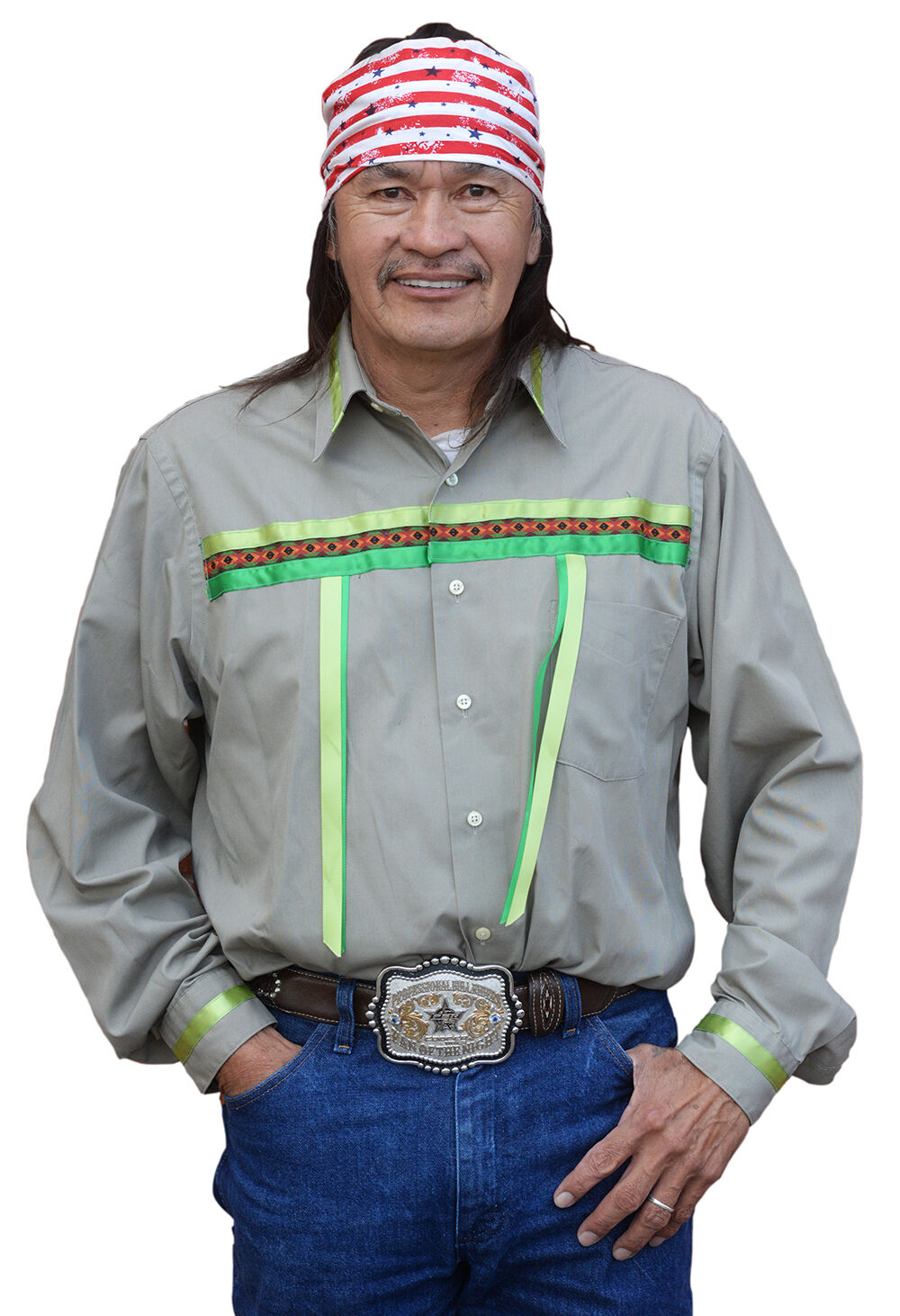 Dione Byrd, of Cherry Tree, is the recipient of this year’s Seven Feathers language award presented by the Cherokee Phoenix. Byrd created a syllabary-based card game to help save and perpetuate the Cherokee language.

Dione Byrd, of Cherry Tree, holds prototype cards for his multi-faceted Cherokee language game. Byrd is the recipient of this year’s Seven Feathers language award presented by the Cherokee Phoenix.

Ramona and Dione Byrd demonstrate how to play a syllabary-based card game created to help teach the Cherokee language.

CHERRY TREE – While sheltering in place during the COVID-19 pandemic, lifelong Cherokee speaker Dione Byrd created a syllabary-based card game to help save and perpetuate his language.

“It makes me proud to hear people talk in Cherokee,” said the 58-year-old Byrd, who lives with his wife, Ramona, in the Cherry Tree community. “We need to keep on teaching Cherokee. I just wanted people to get involved with the syllabary more. That’s why I done that. I believe it’s going to help a lot of people doing this.”

Byrd was one of 12 siblings who grew up speaking Cherokee in the community of Sally Bull Hollow in Adair County.

“My mom couldn’t speak English,” he said. “We was just always taught Cherokee. All them people that lived around us in Sally Bull Hollow, we’re all fluent speakers, every one of us.”

Byrd’s game cards, which represent the 86 Cherokee syllabary symbols, can be used to play a version of solitaire, dominoes or a word game. Byrd drew inspiration from his 94-year-old mother, Leona, who still lives in Sally Bull Hollow.

“My mom was telling me that you all need to keep on going teaching Cherokee,” Byrd said, adding that he hopes families “can sit there together and learn how to speak it” with his card games. “People are forgetting Cherokee; they’re walking away. That’s why I came up with this game. I was showing Mom that I came up with this and she was really proud. She said, ‘That’s how we should be. Let’s keep it going. Don’t let it die down.’”

A non-Cherokee speaker, Byrd’s wife is proving the card games work by slowly learning the language.

“The syllabary, I might have seen it six times my whole life,” Ramona Byrd said. “But after you play this seven or eight times, you’re going to learn the syllabary. You’re going to know where the cards go. Then the more you play it, the faster you get at it. Any level can play. If you don’t know it at all or you know it all, you can still play.”

Byrd’s prototype cards were large, but ultimately they were produced with help from the Cherokee Nation’s language department as a much smaller deck.

“They brought in a handmade prototype they had hand cut and taped together at home with a set of hand written instructions,” CN Language Program manager Roy Boney said. “They demonstrated how the game helps learners become familiar with syllabary. We were really impressed with the game and the fact that the game was developed by a fluent Cherokee speaker, so we felt it was important to help them with the professional manufacturing of the card decks.”

With Boney’s help designing the graphics and packaging, 500 card decks, and accompanying instructions, were professionally made. The language department is using half of the decks for its programs.

Several years ago, the Byrds created, and still maintain, a community library inside their garage, but it remains closed for COVID safety reasons. It’s where the couple honed the syllabary cards and games.

For his language efforts, Byrd was selected to receive the Language Award at this year’s Cherokee Phoenix Seven Feathers Gala, which will be held virtually Dec. 11.

Byrd is also one of the tribe’s first-language speakers to sign a roll book as part of the Cherokee Speaker Roll Project. Speakers who signed were presented a medallion with the image of Sequoyah, inventor of the Cherokee syllabary.

“It meant a lot to me,” Byrd said. “It makes me happy to see something like that. A long time ago, we didn’t have nothing like that. Just like my mom said, it’s good that I went and signed that paper and put my name on that. Everything we do, we brought mom with us so she can be with us. She’s proud of what the Cherokee Nation is doing to keep Cherokee going.”