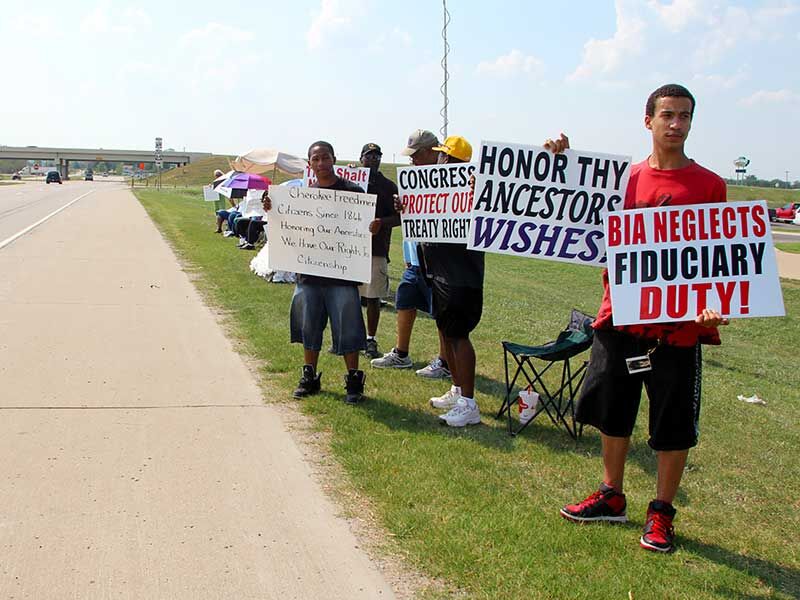 Cherokee Freedmen descendants on Sept. 2, 2011, protest in front of the Bureau of Indian Affairs office in Muskogee. They were protesting an Aug. 22, 2011, Cherokee Nation Supreme Court ruling that voided their CN citizenship. WILL CHAVEZ/CHEROKEE PHOENIX 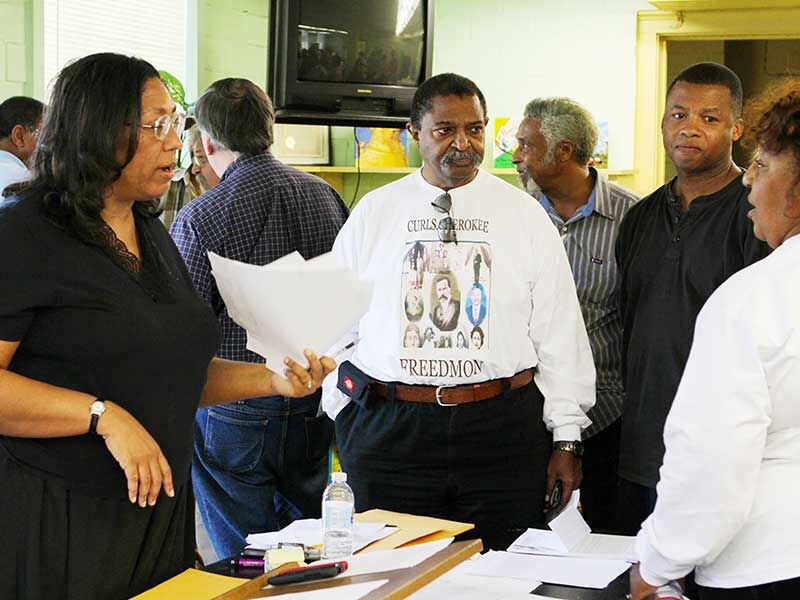 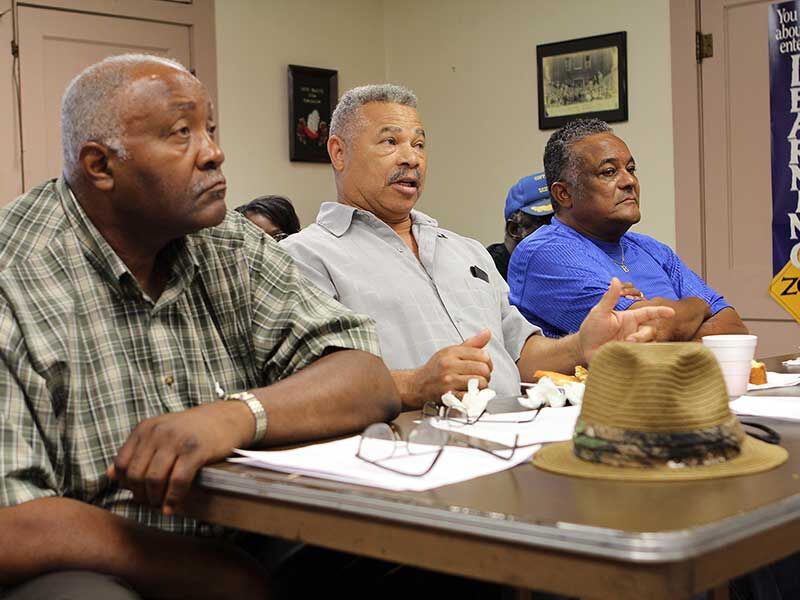 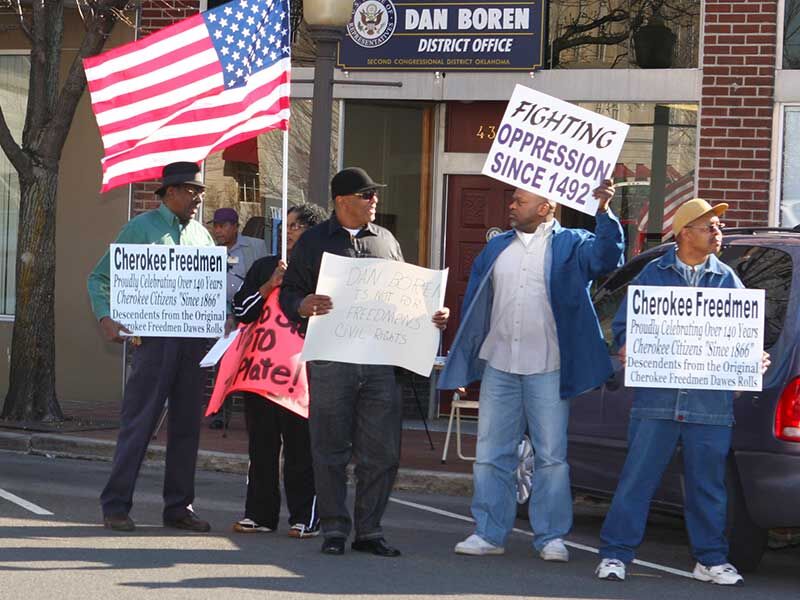 Cherokee Freedmen descendants on Sept. 2, 2011, protest in front of the Bureau of Indian Affairs office in Muskogee. They were protesting an Aug. 22, 2011, Cherokee Nation Supreme Court ruling that voided their CN citizenship. WILL CHAVEZ/CHEROKEE PHOENIX

Compiled by Assistant Editor Will Chavez

1700s: In the 1730s, a Cherokee delegation agrees with British officials that captured runaway Black slaves would be returned to their British owners.

1838-39: Along with the 14,000 Cherokees forced west on the Trail of Tears are Black slaves who belong to wealthier Cherokees.

Sept. 6, 1839: The Cherokee Nation's 1839 Constitution is ratified. Article III, Section 5 states, "No person who is negro and mulatto parentage, either by the father or mother's side, shall be eligible to hold any office of profit, honor or trust under this Government."

Oct. 28, 1861: The CN Council issues "A Declaration by the People of the Cherokee Nation of the Causes Which Have Impelled them to Unite with Those of the Confederate State of America." A statement concerning slavery declares the Cherokee people are tied to the Confederacy although there were past complaints about Southern states. The declaration also states that if the U.S. government were to "annul the institution of slavery in the whole of Indian country and make it what they term free territory and after a time a free state" it would allow the government to take Indian land again.

July 19, 1866: A treaty between the CN and U.S. governments abolishes slavery in the CN. As punishment for joining the Confederacy, the U.S. gives "all the rights of native Cherokee," including voting rights, to freed black slaves, now known as Freedmen, who reside within CN boundaries. The treaty also sets aside land for Freedmen with each household receiving 160 acres.

Nov. 26, 1866: "Necessary" changes are made in accordance with the 1866 Treaty stating, "All native born Cherokee, all Indians, and whites legally members of the Nation by adoption, and all freedmen who have been liberated by voluntary act of their former owners or by law, as well as free colored persons who were in the country at the commencement of the rebellion, and are now residents therein, or who may return within six months from the 19th day of July, 1866, and their descendants, who reside within the limits of the Cherokee Nation, shall be taken and deemed to be citizens of the Cherokee Nation."

June 10, 1896: The Dawes Commission accepts applications for CN citizens, including Freedmen. It enrolls Cherokees by determining their blood quantum, primarily through guesswork. Freedmen are placed on a separate roll from the Cherokee-by-blood roll, but both rolls are a part of the tribe's Dawes Rolls.

1975: The Cherokee people approve a new constitution. Article III states that all Dawes enrollees and their descendants are CN citizens.

Because the Dawes Rolls did not list a blood degree for Freedmen, their descendants no longer have CN citizenship. Bureau of Indian Affairs officials emphasize that the CN Constitution and the 1866 Treaty grant citizenship to Freedmen and their descendants, and that Freedmen should be allowed to vote.

1984: In the case of R.H. Nero v. Cherokee Nation, Nero, a Freedman, sues the tribe in federal court declaring that Freedmen were denied the right to vote in 1983 and prevented from participating in federal Indian benefits programs.

December 22, 1989: In the Nero case, U.S. District Court Judge H. Dale Cook dismisses the claims "against the tribe, its officials, and United States on basis of sovereign immunity and granted summary judgment in favor of federal officials, relying on doctrine of qualified immunity."&#2013266080;

2001: A CN court rules in the case of Bernice Riggs v. Lela Ummerteskee stating that a 1983 law limiting CN citizenship to by-blood Indians is constitutional. Riggs claimed the law was unconstitutional because it omitted Freedmen citizenship.

May 24, 2003: Citizens vote to remove the requirement of federal approval of any amendments to the tribe's Constitution or a new constitution. Freedmen descendants are not allowed to vote.

June 2003: A Cherokee Freedmen group contacts the BIA to protest the CN's May 24 general election. It argues the Treaty of 1866 protects the citizenship rights of "Black Cherokees."

July 26, 2003: Cherokee voters approve a new constitution to replace the 1975 Constitution. The BIA does not approve the new document because it includes the amendment passed by Cherokee voters removing federal approval for amendments. The BIA wants voting rights and the allowance to run for elected offices for Freedmen before the agency approves. On Aug. 2, the BIA does not challenge the CN's results of the May 24 general election.

Aug. 11, 2003: Cherokee Freedman leader Marilyn Vann sues the Department of Interior. In Vann v. Kempthorne, Freedmen contend the CN, with approval from then-DOI Secretary Dirk Kempthorne, prevented them from participating in the 2003 tribal elections, and seek a court order declaring the elections invalid. They also want the secretary to not recognize the results of the election until Freedmen are allowed to vote.

2004: Lucy Allen sues the Tribal Council, tribal registrar and registration committee in CN court challenging the tribe's authority to strip citizenship of Dawes enrollee descendants, who are citizens based on the 1975 Constitution.

March 7, 2006: The Judicial Appeals Tribunal rule 2-1 in Allen's favor. The ruling reverses a 2001 JAT decision on the Riggs v. Ummerteskee case. The ruling states: "The Cherokee citizenry has the ultimate authority to define tribal citizenship," but "when they adopted the 1975 constitution it did not limit membership to people who possess Cherokee blood. Instead they extended membership to all the people who were 'citizens' of the Cherokee Nation as listed on the Dawes Commission Rolls." During a Tribal Council meeting on June 12, 2006, the Council votes 13-2 to amend the Constitution to require Indian blood for citizenship. Cherokee people must vote on the amendment, however, and a resolution calling for a special election in the fall fails. Some CN citizens circulate an initiative petition in June asking voters to support an Indian blood requirement amendment to the Constitution and a special election.

March 3, 2007: In a special election, Cherokees amend the Constitution to limit citizenship to those with Indian blood. About 2,800 Cherokee Freedmen are disenfranchised.

May 14, 2007: CN District Judge John T. Cripps approves an application for a temporary injunction against the March 3 constitutional amendment and reinstates Freedmen citizenship.

August 2007: U.S. House Resolution 2824, sponsored by U.S. Rep. Diane Watson, threatens to cut off the CN's federal funds and ties with the U.S. government if Freedmen are not given their citizenship rights. The Chad Smith administration argues that due to the CN's sovereignty, the tribe could decide "what a Cherokee is."

2008: Congressional Black Caucus members try to block a Native American housing assistance bill to prevent the CN from receiving funds until the tribe is "in full compliance with the Treaty of 1866" to recognize Freedmen and their descendants as citizens.

Feb. 3, 2009: The CN files a federal lawsuit to resolve the dispute with Freedmen descendants. The CN asks the U.S. District Court for the Northern District of Oklahoma to confirm, "Congress in 1896 unilaterally modified the Treaty of 1866 and nullified Freedmen and their descendants tribal citizenship."

Jan. 14, 2011: A CN judge rules in favor of Freedmen in a citizenship case, where in 2007, the CN amended its Constitution to strip Freedmen of citizenship. In the case of Nash v. CN Registrar, Judge John T. Cripps rules "descendants of original enrollees of the Dawes Commission designated Cherokee Freedmen or Cherokee Freedmen-Minor Children...shall have the rights as previously entitled prior to the passage of the aforesaid Constitutional amendment." This ruling allows approximately 2,800 Freedmen to have their CN citizenship restored while the case in U.S. District Court is pending.

Aug. 22, 2011: The CN Supreme Court reverses and vacates Cripps' ruling regarding Freedmen. The Supreme Court states Cherokee people had the right to amend their Constitution and set citizenship requirements.

2012: The Interior files a counterclaim against the CN for a judgment stating the 1866 Treaty "provided and continues to provide" Freedmen descendants with certain rights and privileges that include tribal citizenship. In May, the U.S. District Court for the Northern District of Oklahoma grants the tribe's motion to amend its complaint filed in 2009.

2014: U.S. District Judge Thomas F. Hogan hears oral arguments from CN and Freedmen attorneys regarding the long-standing Nash lawsuit. The arguments pertain to whether the 1866 Treaty between grants citizenship rights to former slaves of CN citizens and their descendants.

Aug. 31, 2017: CN Attorney General Todd Hembree does not appeal Hogan's ruling that allows Freedmen CN citizenship rights. "The Cherokee Nation respects the rule of the law, and yesterday we began accepting and processing citizenship application from Freedmen descendants. I do not intend to file an appeal," Hembree says.

Dec. 11, 2017: Eight CN citizens ask the CN Supreme Court to withdraw Garrett's order and issue a writ of mandamus to Hembree directing him to file an appeal of Hogan's ruling.

May 16, 2018: The CN Supreme Court denies the motion to compel Hembree to appeal Hogan's ruling in favor of the Freedmen.