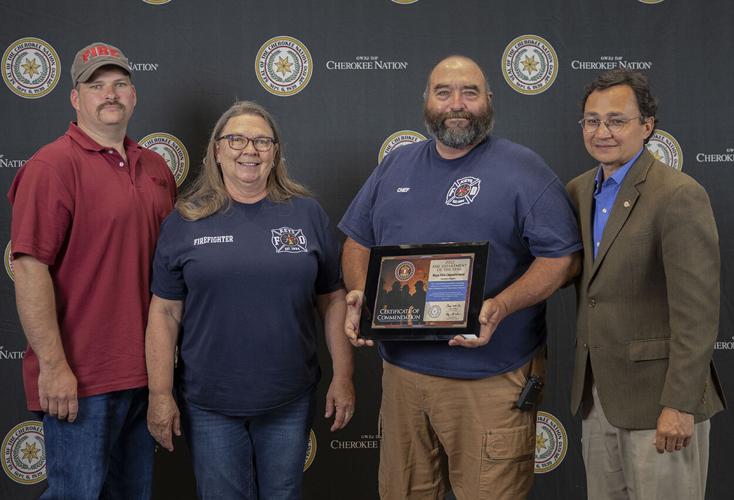 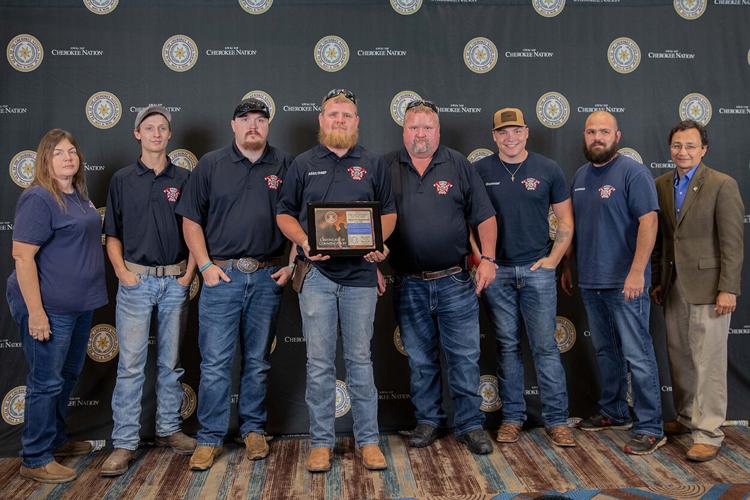 TAHLEQUAH – Hundreds of firefighters from around the Cherokee Nation reservation met at the Chota Center inside Cherokee Casino Tahlequah on May 19 to be recognized and receive donations to their respective departments.

CN honors the firefighters and makes the donations annually, but the ceremony and dinner were held live for the first time since 2019. Reliant on membership fees and fundraisers, 136 fire departments received an additional $476,000 – an average of $3,500 each – to help with operations and expenses.

“In Oklahoma, the vast majority of firefighters are volunteers who risk their lives not for the pay or the glory, but because they are public servants at heart,” Principal Chief Chuck Hoskin Jr. said. “Thousands of these men and women throughout the Cherokee Nation Reservation will leave their homes and their families at a moment’s notice to help protect and save lives. I know that our firefighters always have our backs, and because of their service and sacrifices it is critical that the Cherokee Nation continues to support their efforts. I believe we owe all of our firefighters a debt of gratitude for their selflessness and acts of courage, which we often do not see first-hand.”

The announcement of the honor for Disney VFD noted the efforts to reduce its Insurances Services Office rating, which measures fire risk for purposes of assessing the cost of coverage policies for home and business owners. The ratings can number 1 through 10, and are frequently used by cities and fire departments to gauge fire protection effectiveness. With an expansion of its department that included enhanced training, building a new rescue truck and added equipment, the Disney VFD reduced its ISO rating from 9 to 5.

“We use the Cherokee Nation contribution for building better facilities, to keep our trucks going, our fuel and our equipment to fight fire,” Disney firefighter Larry Sanders said. “It means a lot to have support from the Cherokee Nation.”

Keys VFD was acknowledged for its assistance to other area fire departments with responses, coverage, reserve manpower and training.

“We pride ourselves in serving the members of our community and to be honored for something that we love to do is precious,” Keys Fire Department Chief Yogi Cole said. “I’ve been in fire service 39 years and fire departments, especially small-town, rural fire departments, can stretch a dollar farther than any organization I’ve ever seen. We have short and long-term goals and the Cherokee Nation funding helps us accomplish those goals.”

• Jordan Lancaster, of the Whitehorn Fire Department, was honored for his valor. Lancaster volunteered to fill the role when his department’s safety officer took a leave of absence. Lancaster was a leader when responding to structure fires, and when a firefighter fell through a floor at a structure fire, Lancaster helped rally responders on the scene to get the firefighter to safety. They continued fighting the fire and saved a large portion of the structure.

• Shane Richardson, of the Collinsville Fire Department, was recognized for his assistance during a traffic collision. Richardson drove up on a crash where a man was trapped inside a vehicle in which a fire had started. Richardson used a fire extinguisher on the fire while others who stopped to assist pulled the trapped and unconscious man to safety.

• BJ Baker of the Tahlequah Fire Department was honored for leadership during the COVID-19 pandemic. Baker continued responding to calls during the pandemic while encouraging younger firefighters and checking their mental health under the pandemic restrictions. He has continued to train, and was appointed to the Oklahoma State Firefighters Association Legislative Committee, which promotes legislation that supports firefighters. Baker focuses on issues of safety, training, equipment and funding for firefighters and their departments across the CN and Oklahoma.

• Rick Russell, of the Redland Fire Department, was recognized for his service to the community. Russell responds to nearly all emergency calls received by the department, often alone. During a house fire in January, Russell was first to arrive and conduct a quick search for victims around a structure engulfed in flames. Nobody was inside, but Russell did save a family pet.

• Misty Martin, of the West Siloam Fire Department, was honored for her fire service. Martin is assistant fire chief, responding to most calls, helping to provide training and supervising regular operations. Fellow firefighters noted her compassion and commitment to protecting lives and property in her community. After a recent call, Martin was instrumental in the recovery efforts of a tragic structure fire, and subsequently helping the family.