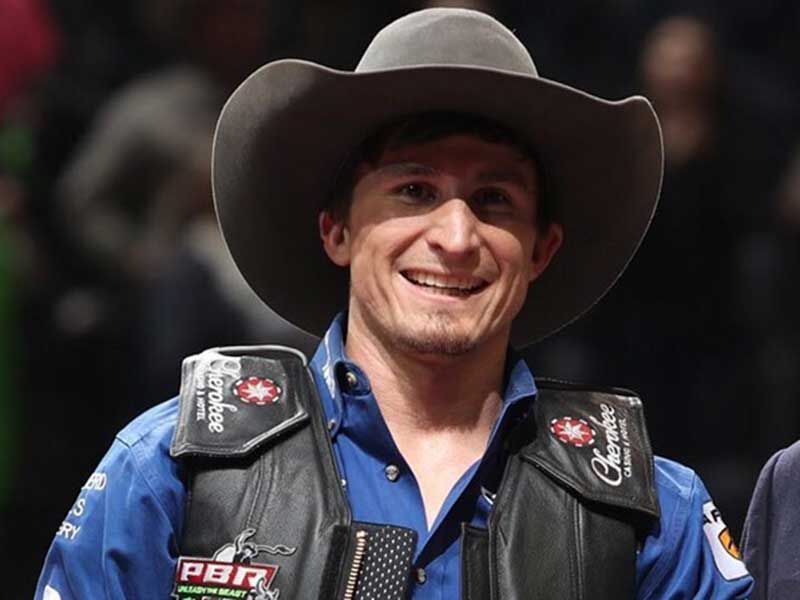 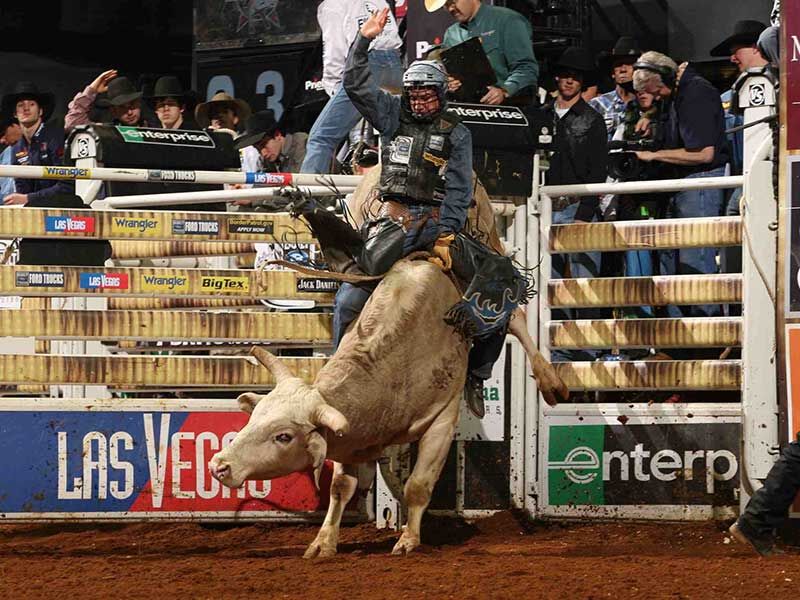 Cherokee Nation citizen Ryan Dirteater attempts to ride the bull, Code Blue, during the 2009 Troy-Bilt Invitational in Tallahassee, Florida. The 2020 season is Dirteater's last, as he plans to retire. ANDY WATSON/BULL STOCK MEDIA

Cherokee Nation citizen Ryan Dirteater attempts to ride the bull, Code Blue, during the 2009 Troy-Bilt Invitational in Tallahassee, Florida. The 2020 season is Dirteater's last, as he plans to retire. ANDY WATSON/BULL STOCK MEDIA

HULBERT -- After a three-month break to convalesce, Cherokee Nation citizen and professional bull rider Ryan Dirteater is back in the saddle -- or the rigging, rather.

Dirteater said on June 3 he was ready to compete in the June 5-7 Professional Bull Riders Team Challenge in Las Vegas. "I got released (medically) a week ago, and now it's on to the next big one."

PBR also returned after an interruption due to the COVID-19 outbreak. The Team Challenge allowed no fans and competition was limited to a dozen teams with four participants each. All riders had to pass a COVID-19 test and remain with their teams. Dirteater has competed with the all-Native Team USA Wolves.

The 11-time PBR World Finals qualifier and 2016 World Finals event winner announced in January his intention to retire after the PBR World Finals on Nov. 4-8 in Las Vegas. However, the injury derailed Dirteater's hope to lead the all-Native Team USA Wolves to the Global Cup USA in Arlington, Texas.

Dirteater was thrown by a bull at the Feb. 7-8 Iron Cowboy in Los Angeles. He sustained three thoracic fractures due to a spine compression.

He predicted he would still be ranked in the PBR's top 30 upon returning, and re-entered competition ranked 27th.

"I feel great," Dirteater said. "I've been working out, and my nutrition is good. Physically and mentally, I've been waiting for a long time to come back, but I've been enjoying the time home with my family. The key in this sport is to be in the zone and do the best you can, and try to stay healthy because it is dangerous. If I can ride and stay healthy until the PBR Finals, I can finish in the top 10."

Dirteater called bull riding "a young man's sport," and said he wants to retire while among the prime competitors. He always wanted to be off the bulls by age 30, and he turned 31 in April.

"I've been doing this since 2008, when I graduated from Hulbert High School," he said. "I'll have been doing this for 12 or 13 years. It's like being in a fantasy world, being able to step up to the big stages in bull riding history. I was able to reach the elite level and make a career out of it. Most of my heroes have retired."&#2013266080;

Dirteater would love to leave the sport with a world title -- he has finished as high as fourth -- but he knew he would need to catch fire to make up the points lost while injured. Achievable goals include a top 10 finish in the standings and getting his 10th win in a televised event.

"As you get older, the ground gets harder, and you see these 18-, 19-year-olds coming up who are hungry," he said. "You have to perform at the very best level every year. If you don't, you get cut and have to work your way back up. To do that every season, you need to be a self-starter and go-getter. I'm taking it in and enjoying every moment that I get because nothing lasts forever."

He said he has many plans for retirement, among them is enhancing his ties to the CN and its people.

"When I am done riding, I am going to keep learning," Dirteater said. "I've been gone weekends with PBR, but pretty soon I'll be able to go to the Cherokee National Holiday. I can see my family and friends and be around the community. I love talking to the elders and hearing the stories they tell. I want to learn more. I enjoy my land, being around the cattle -- that is where I feel at peace. This is where my heart is and always will be."

Dirteater said he's grateful to all who supported him through the years of competition.

"I thank my family and friends, and all my fans in Oklahoma, the Cherokee Nation and the community," he said. "There have been so many phone calls -- some wishing I wouldn't retire, others saying I've made a great career out of it. It's been inspiring for me to know how many people offer their care and support."

Dirteater returns to PBR after recovering from injury

Dirteater returns to PBR after recovering from injury