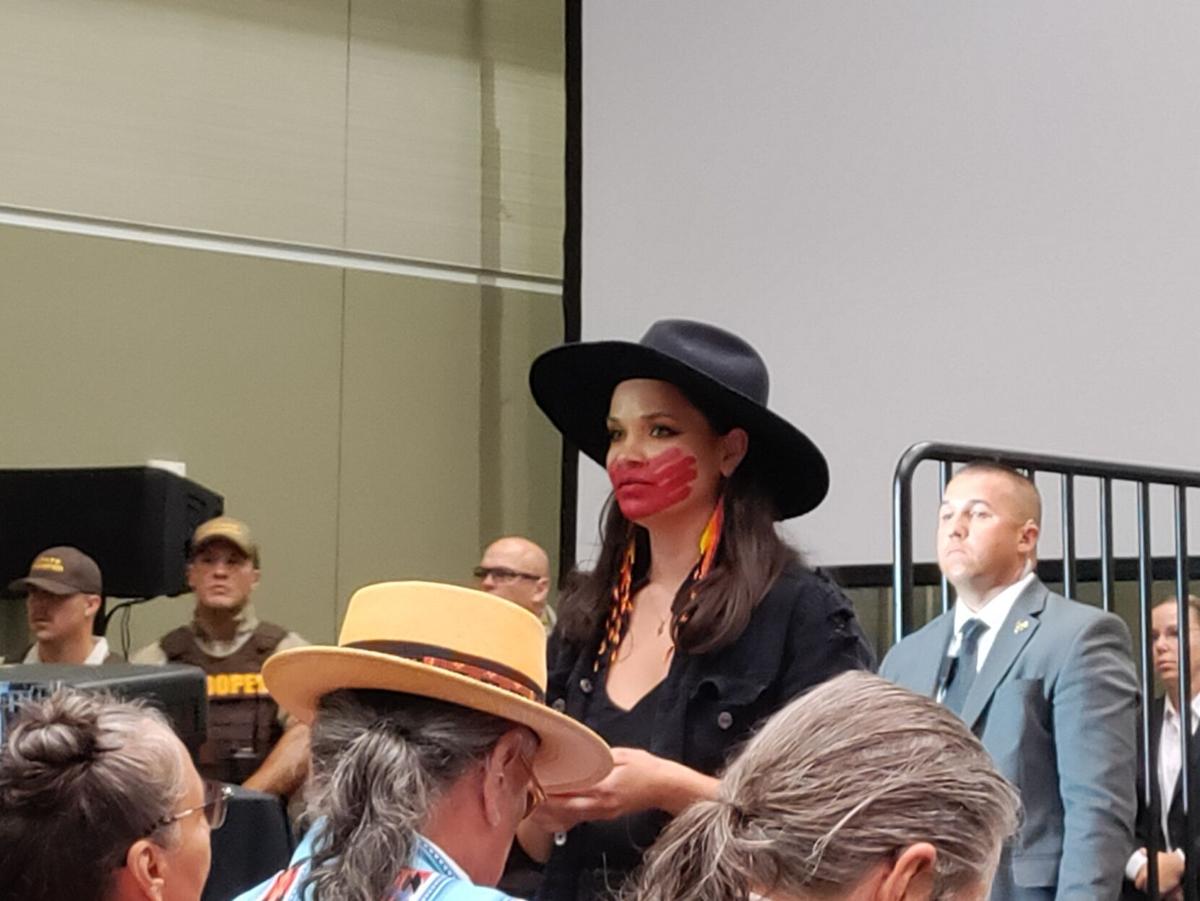 Cherokee Nation citizen Sarah Gray turns her back to Gov. Kevin Stitt as he speaks during a rowdy forum intended to explain the effects of the U.S. Supreme Court’s 2020 McGirt decision on crime victims and state prosecutions. 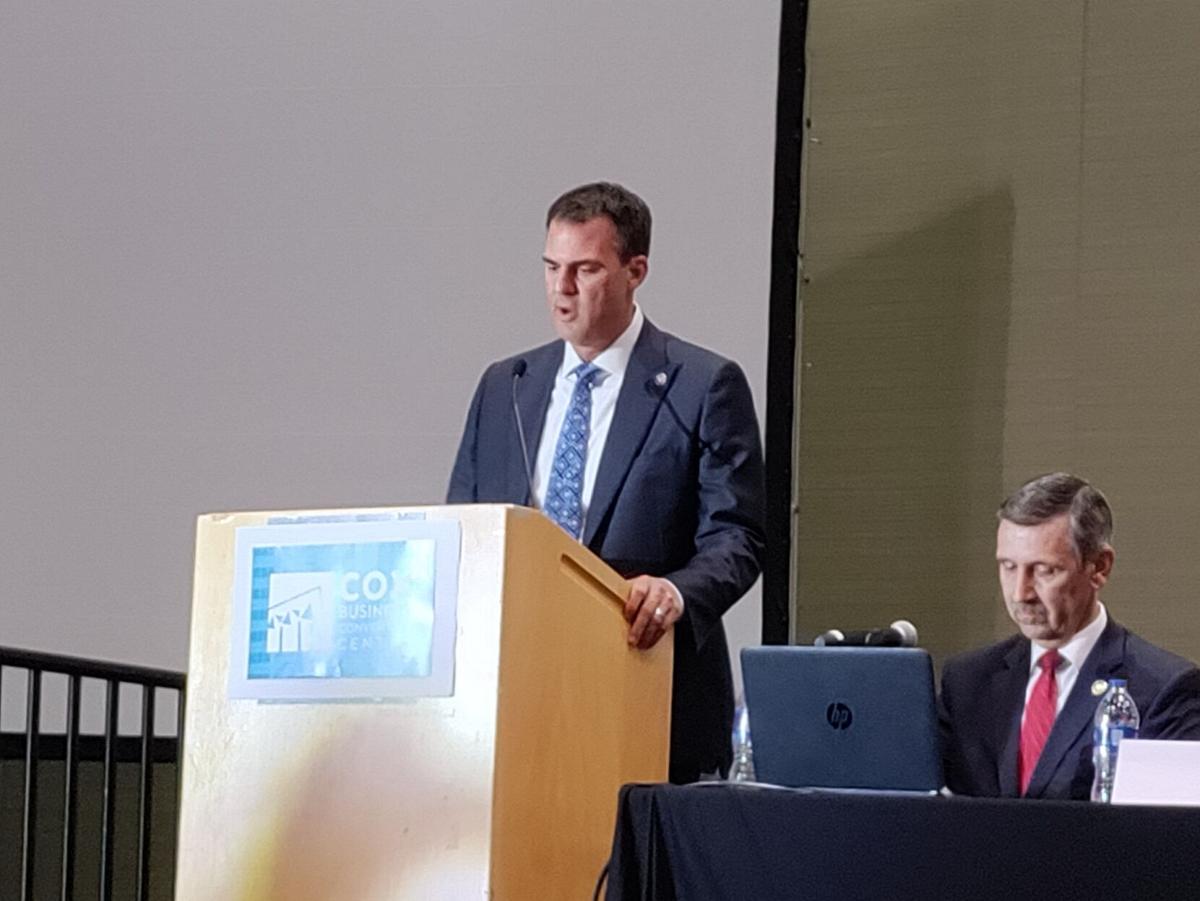 Gov. Kevin Stitt speaks on July 13 at a public forum regarding the effects of the U.S. Supreme Court’s McGirt decision in Tulsa. His office along with Tulsa County District Attorney Steve Kunzweiler organized the forum. 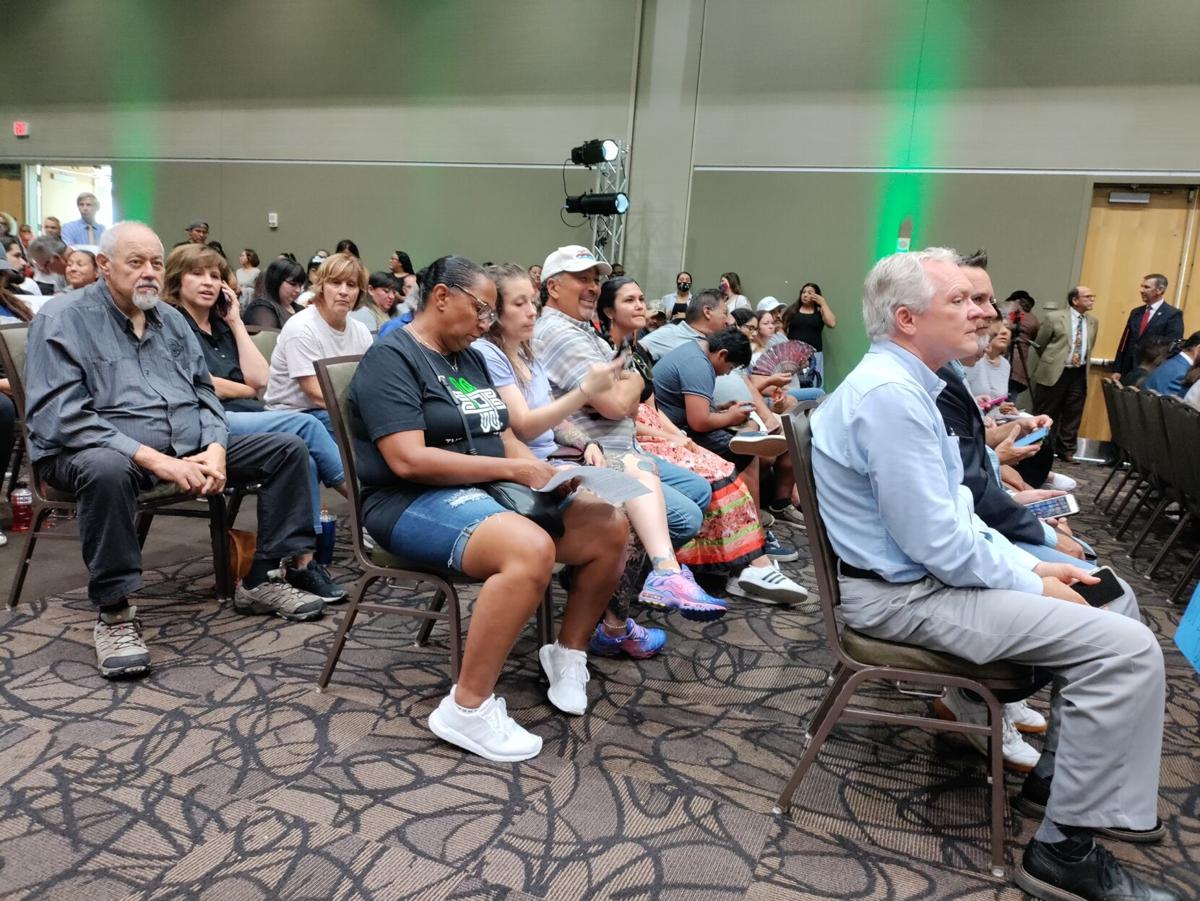 A mostly Native overflow crowd attended the forum inside the Cox Business Convention Center in Tulsa.

Cherokee Nation citizen Sarah Gray turns her back to Gov. Kevin Stitt as he speaks during a rowdy forum intended to explain the effects of the U.S. Supreme Court’s 2020 McGirt decision on crime victims and state prosecutions.

Gov. Kevin Stitt speaks on July 13 at a public forum regarding the effects of the U.S. Supreme Court’s McGirt decision in Tulsa. His office along with Tulsa County District Attorney Steve Kunzweiler organized the forum.

A mostly Native overflow crowd attended the forum inside the Cox Business Convention Center in Tulsa.

TULSA – What was billed as a forum on the effects of McGirt v. Oklahoma on the state’s powers of criminal prosecution devolved into a shouting contest, as a packed room consisting mostly of Five Tribes citizens generally yelled over the panel of district attorneys and state officials, including Gov. Kevin Stitt.

Held in the Cox Business Convention Center on July 13, the forum – scheduled for two hours – was cut to one. Among the many complaints arising from the clamorous audience was the complete absence of tribal representation on the panel.

Tulsa County District Attorney Steve Kunzweiler, whose office organized the forum with Stitt’s office, told the Tulsa World that the tribes did not respond to invitations, apparently emails sent to respective Cherokee, Chickasaw and Muscogee attorneys general on June 3.

“If Gov. Stitt truly wants to find solutions for all of Oklahoma in response to McGirt, tribal nations must have a seat at the table, rather than a hollow invitation to sit in the audience,” said Cherokee Nation Principal Chief Chuck Hoskin Jr.

Dist. 27 District Attorney Jack Thorp said inclusion of tribal officials on the panel “absolutely” would have helped the atmosphere of the forum, which he said didn’t remotely communicate its message. However, those responsible for state prosecutions have consistently expressed little enthusiasm for the tribes or the federal government taking responsibility for cases handled by the state pre-McGirt, or already prosecuted by the state and pending retrial.

While open to ideas such as compacting, Thorp said, “I want the felony crime cases back,” citing prosecution of felonies as a state responsibility throughout the U.S.

“I really do believe (the tribes) also understand the problems,” Thorp said. “They’re coming at it from a completely different perspective from state prosecutors, but the problems are there. Federal prosecutors cannot handle this onslaught of cases. The three-year cap for tribal prosecution is not enough of a deterrent for serious criminal cases…. The biggest problem is federal cases where a non-Indian commits a crime against an Indian, and those cases may sit in limbo forever. (The federal government) won’t prosecute a case that doesn’t involve a serious physical injury.”

“The past 12 months since the McGirt decision have proven that criminals did not suddenly all run free,” Hoskin said. “We have already filed more than 1,200 cases in tribal district court. Local police officers still have the resources they need, and our Cherokee Nation justice system continues to work closely with local, state and federal partners to ensure everyone in Oklahoma, whether or not they live on tribal land, is supported and protected. We’ve added six new prosecutors, two new district judges, and 13 additional deputy marshals.”

Hoskin said the CN has 80 cross-deputization agreements in place with all levels of law enforcement within its reservation. He added that the CN would remain good partners with other agencies, just as before the McGirt decision.

Thorp and Dist. 12 District Attorney Matt Ballard also said that, whatever shadows are cast by McGirt, they maintain productive relationships with tribal agencies. There has been preliminary talk of compact agreements to share responsibilities. Such deals would require the approval of Congress, and tribes would almost certainly demand maintenance of the sovereignty to try and sentence their own citizens, which seems a likely snag in any negotiations with the state.

Oklahoma’s prosecutors argue that trying felonies is a fundamental responsibility of the state, which has a longstanding infrastructure designed to handle the workload. The tribes maintain Oklahoma presumptively took charge of a Native responsibility that was never rescinded, and their citizens’ legal rights are better represented and protected in tribal or federal court.

“We saw a lot of that mistrust that has built up tonight,” Ballard said. “The good thing with the Cherokee Nation is that the councilors, the AGs, the chief – they’re our neighbors and friends. We know them and they know us…. I won’t have any problems sitting down with them to try and hash this out.”

Kunzweiler stated the forum was intended to address concerns of crime victims affected by McGirt, including how Native victims could be negatively impacted. But mention of victims consistently brought a chorus of groans from the audience, some shouting that American Indians have been repeatedly victimized by Oklahoma’s legal machinery since statehood.

Hoskin said those impacted by criminal activity were not an afterthought and pointed to resources directed to helping victims of crime.

“Over the past year the Cherokee Nation has doubled our team of victims’ services advocates and has dedicated $3 million in funding to support victims and their families, alongside our estimated $35 million needed in other investments and hirings to expand the capacity of our legal system,” he said.

Victims and their families in need of support can contact the CN ONE FIRE Victim Services office at 918-772-4260. Case information contacts for CN District Court, Attorney General’s Office or Marshal Service are at www.cherokee.org.

“While it is unfortunate that some of our political leaders are focused on flashy headlines – regardless of what is actually best for victims and regardless of what is actually backed by fact – we will continue our important work to cooperate with local, federal and state partners on real solutions,” Hoskin said. “The victims in the cases dismissed or retried as a result of the state of Oklahoma’s decades of acting outside of its jurisdiction deserve our full and unwavering support – not to be used as a political tool.”

The audience’s strongest gusts were directed toward Stitt, a CN citizen who stood as moderator. After a boisterous hour, he ended the forum early, and departed the podium to the chant of “Shame on you!”

Hoskin said Stitt “made it clear” during the forum and afterward that he wants McGirt overturned, though the CN and other tribes “were here long before there was a state of Oklahoma.”

“Rather than working so hard to sensationalize the McGirt decision, frighten the public and undermine tribal sovereignty, Gov. Stitt should be working with tribal nations to find solutions that honor the sacred sovereignty of tribes and protect all Oklahomans,” Hoskin said. “The Cherokee Nation has long been committed to that path forward, and with or without Gov. Stitt’s support, we will continue to build the best criminal justice system that exists to ensure justice continues to be served on our reservation.”