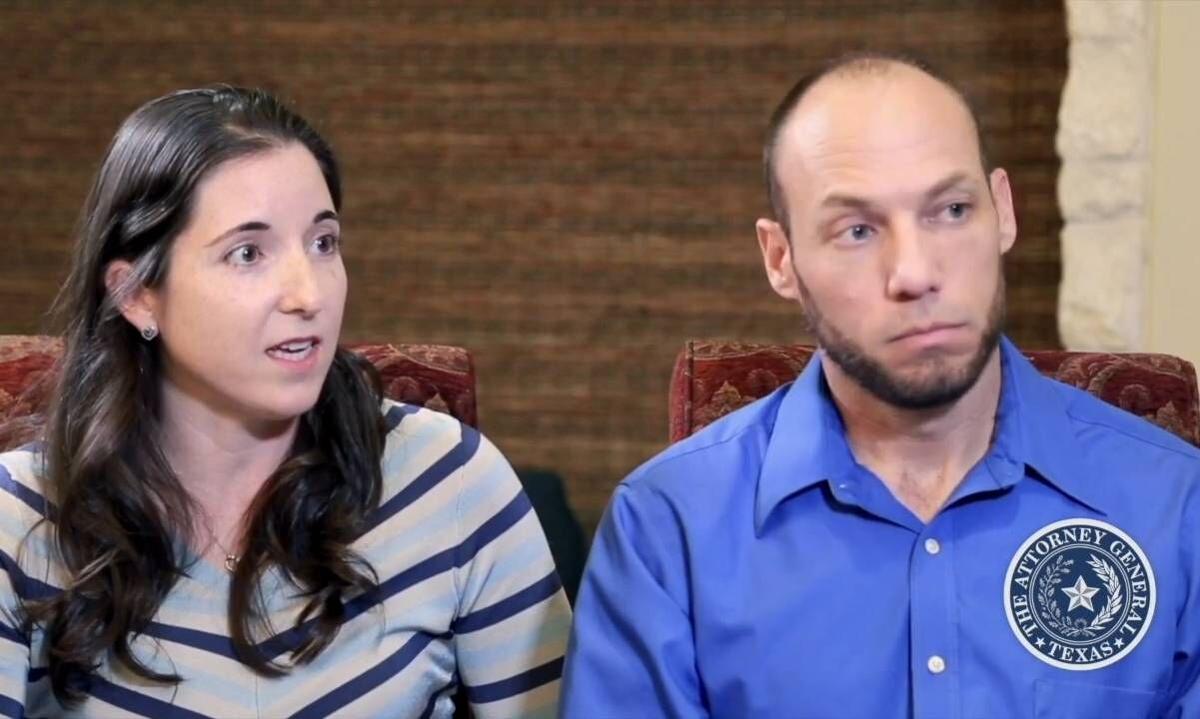 Jennifer and Chad Brackeen speak with Texas Attorney General Ken Paxton, not pictured. The Brackeens sought adoption in 2017 of a Navajo child they’d been fostering but were blocked by ICWA provisions when the child’s tribe identified a home within Navajo Nation where the child could go. 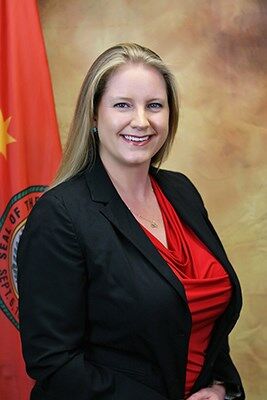 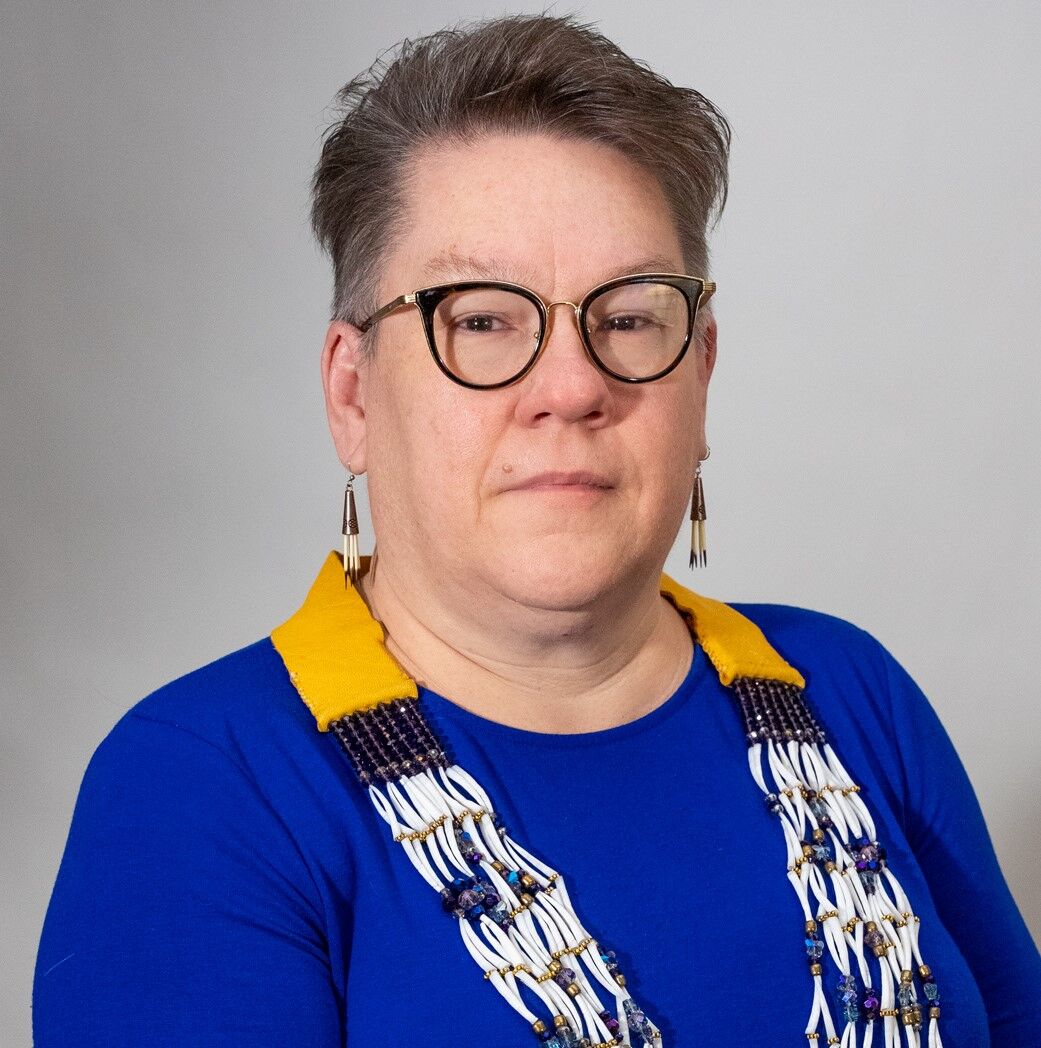 Efforts to overturn the federal Indian Child Welfare Act might not be entirely successful because of state-based laws that impose similar requirements in at least nine states, including Oklahoma.

“I think you will see tribes starting to put more effort … to strengthen state ICWA laws as a way to protect Indian kids, their families and tribes,” Nimmo said.

Rising concern about the fate of the federal law stems from an appeal to the Supreme Court by a Fort Worth couple, who are foster parents of a Navajo child, challenging the constitutionality of the law. Supported by Texas, Indiana and Louisiana, they argue the law uses race-based criteria in violation of their constitutional rights under the 14th Amendment.

Jennifer and Chad Brackeen sought adoption in 2017 of a Navajo child they’d been fostering but were blocked by ICWA provisions when the child’s tribe identified a home within Navajo Nation where the child could go.

With help from corporate lawyers and the Texas attorney general, the couple fought the Navajo Nation and won custody. In October 2018, the Brackeens filed a federal lawsuit on grounds of racial discrimination, arguing that ICWA made it harder for them to adopt the child.

The CN, Oneida Nation of Wisconsin, Morongo Band of Mission Indians of California and Quinault Indian Nation of Washington are all seeking to block the effort to overturn the ICWA statute.

Nimmo said in the unlikely scenario ICWA is overturned because it is race-based, that would impact state ICWA laws since states can’t treat people differently based on race.

But if the court allows its own anti-commandeering argument to stand, it wouldn’t prevent states from passing or altering their own ICWA statutes, regardless of the outcome for the federal statute.

“The Indian Child Welfare Act is one of the most important acts of external sovereignty a tribe can engage in,” said Claudette Grinnell-Davis, a University of Oklahoma professor.

Grinnell-Davis is studying, with help from a Robert Wood Foundation grant, how Nebraska’s ICWA statute has improved Nebraska’s child welfare system as it relates to Indigenous children. Grinnell-Davis said the research is not only timely because of the Brackeen case, it will be the largest-scale attempt ever to evaluate ICWA.

An Oklahoma Department of Human Services report released in September 2020 said 7,774 children were in Oklahoma foster care, with 322 in tribal custody. Of the 7,452 in state custody, 2,567 were Indigenous.

Oklahoma human services data indicated more than 80% of Oklahoma’s foster and adoptive homes are not Indigenous, but the likelihood of having an Indigenous child placement was high.

Nine states have their own versions of the federal ICWA. Oregon passed ICWA legislation in July 2020. Oklahoma’s was adopted in 2017.

The nine states’ statutes address everything the federal ICWA statute does, but those are just the comprehensive state statutes, Simmons said.

Closer to 25 or 30 states have language in their existing child welfare systems mentioning or supporting ICWA provisions. Texas, he said, is one.

“States and tribal nations are realizing there is much more benefit and power in working together on these cases, than there is to not,” said Simmons, who said 34 states have federally recognized tribes. “I continue to see it as a sign of increased support and adoption of ICWA’s principles in state child welfare law.”

Kathryn Fort, representing the four tribes intervening in the case, said she anticipates more tribes signing onto amicus briefs to support ICWA​, joining the hundreds who have already done so this fall.

CN journalist Rebecca Nagle investigated underlying custody cases and major players in the effort to overturn ICWA in season two of her podcast, “This Land.”

The Brackeens sought legal help from corporate law firms who typically represent companies such as Walmart, Chevron and Amazon, rather than family law.

“These cases are really kind of a Trojan horse for other money interests,” Nagle said.

Nagle said one issue with ICWA is there is no consequence to state agencies when they aren’t compliant with its laws.

“Who won custody in a lot of these cases really came down to who had more money and legal resources,” Nagle said.

Former Oklahoma State Sen. Connie Johnson said she’ll be livid if ICWA is overturned. Johnson is a Black woman of Choctaw descent who is running for governor of Oklahoma.

“I think it’s pretty arrogant for these families seeking to repeal ICWA to disregard indigenous culture and the importance of children growing up in their culture,” Johnson said.

Nancy Marie Spears, a Gaylord News reporter based in Washington, is a CN citizen.