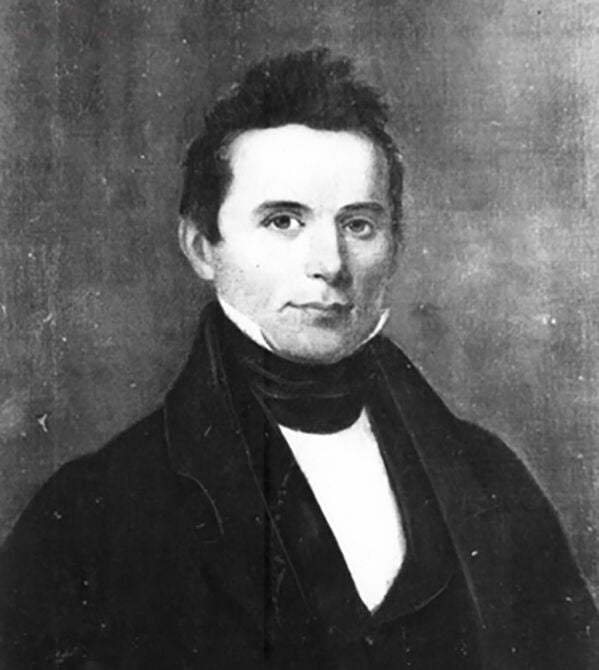 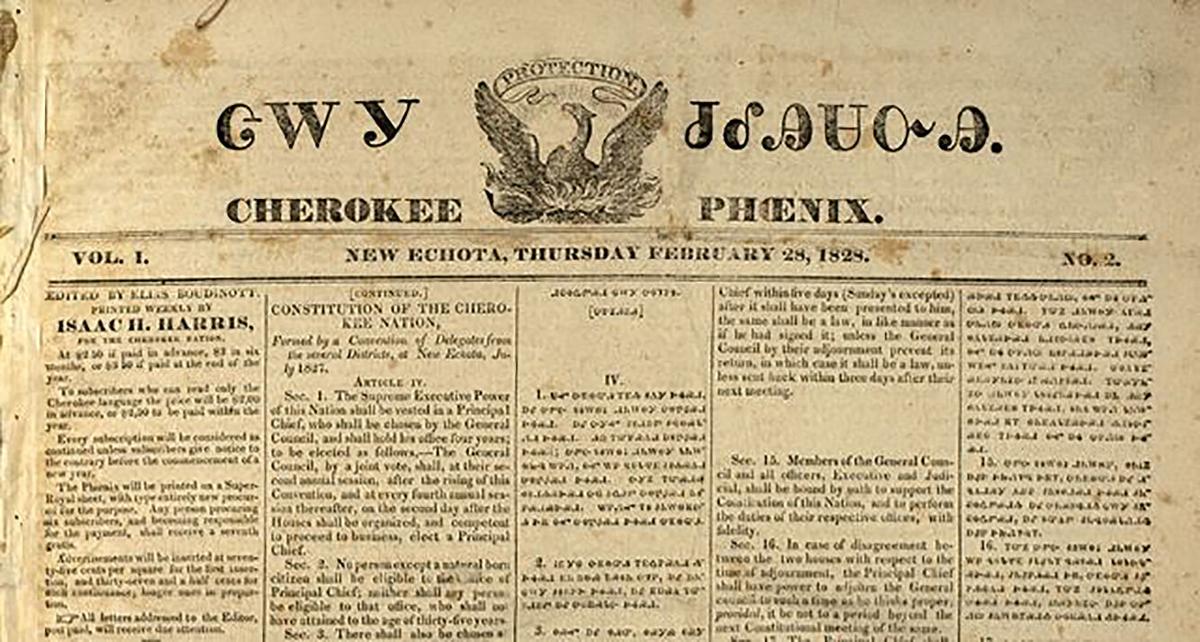 A photo of the second issue of the Cherokee Phoenix.

TAHLEQUAH – After Sequoyah invented the Cherokee syllabary in the early 1800s, his written language was used primarily for Christian instruction, but tribal leaders saw the syllabary could also be used to inform Cherokee people via a newspaper.

“To obtain a correct and complete knowledge of these people, there must exist a vehicle of Indian intelligence, altogether different from those which have heretofore been employed,” Elias Boudinot, the Cherokee Phoenix’s first editor, said.

The 23-year-old planned to print the news and other matters important to Cherokee people in columns of Cherokee and English. A 30-foot-by-20-foot news office was established in the new Cherokee capital at New Echota, Georgia

A 1,000-pound printing press and its accompanying equipment arrived at New Echota on Feb. 1, 1828, after a 200-mile wagon trip from Augusta, Georgia, over mountainous traders’ paths. It would be used to print the weekly newspaper and other tribal publications.

Speaking to the National Council on Oct. 13, 1827, Principal Chief John Ross asserted, “the public press deserves the patronage of the people and should be cherished as an important vehicle in the diffusion of general information and…in asserting and supporting our political rights.”

During the first three weeks in February 1828, the Phoenix staff worked diligently to master the intricacies of their new machine and in hand setting copy for the inaugural edition that was printed on Feb. 21.

Rev. Samuel Worcester, a Calvinist missionary who lived among the Cherokee and played a role in founding the newspaper and obtaining the printing press, drew up a prospectus for the Phoenix calling for the publication of information on various subjects: laws and documents of the CN; accounts of manners and customs of the Cherokee; the progress in education, religion and arts of civilized life; principal interesting news of the day; and miscellaneous articles calculated to promote literature, civilization, art and religion.

Boudinot had his own dreams for the paper, which he disclosed in a letter to a brother-in-law, Herman Vaill, in Connecticut. His objectives were to keep missionary-minded people of the north interested in Cherokee affairs and to bring current news to isolated Indians.

“…Our object is simple, and in our opinion requires no great attainments. It is…the benefit of the Cherokees, who…are uninformed,” he said.

The Cherokee National Council subsidized the newspaper and guaranteed Boudinot an annual salary of $300. Revenue from subscriptions was uncertain and advertising had not come into its own by 1828 as a major source of newspaper financial support.

Boudinot earned his $300. He prepared a weekly editorial, corrected proof sheets, was the business manager and also wrote most of the copy for publication in Cherokee. He could not write as rapidly in Cherokee as in English.

The first three issues of the Phoenix were used to publish the Cherokee constitution. The next 21 editions carried important laws of the nation passed in preceding years. Local events seldom appeared in the Phoenix. There were no items concerning personal visits, social happenings, sports or other occurrences that took place in Cherokee communities. The only local reporting concerned itself with news of violence or legal action. This was not a shortcoming of the Indian journalists because newspapers of the 1820s and 1830s did not attempt to publish such items.

The passage of the Indian Removal Act in 1830 became a concern of the Phoenix editor. Pressure on the CN to move west was increasing. On June 10, 1830, Boudinot editorialized a letter that described the unsatisfactory western lands of the Cherokee and Muscogee (Creek). The editor also took this occasion to publish a heated rebuttal of an article that had appeared in a Washington, D. C., newspaper asserting that Indian tribes had made little progress in becoming civilized.

In the June 17, 1829, issue, Boudinot had pursued the land issue commenting on how well Georgia representatives were getting along in seeking to persuade President Andrew Jackson to favor their claims. Boudinot used the Phoenix to attack the actions of Georgia authorities and tried hard to arouse sympathy for the Indian cause among readers in Northern states.

The removal issue led to Boudinot’s resignation as editor on Aug. 1, 1832. By that time, he had become an advocate for removal along with his uncle, Major Ridge, and cousin, John Ridge. This faction, or Treaty Party, came to believe that it would be useless for the Cherokee to remain in Georgia. They thought that the only chance for preserving national sovereignty would be to move west. But Chief Ross and the majority party of the Cherokee people did not believe removal was inevitable.

The Phoenix was published until May 31, 1834, when the CN ran out of funding. Attempts were made to revive the paper, but when word leaked that Ross intended to move the printing press from New Echota to nearby Red Clay, Tennesse, (Georgia had prohibited the CN from conducting activities within state limits) the Georgia Guard moved in and destroyed the press and burned the Phoenix office with the help of Boudinot’s younger brother, Stand Watie, who was a Treaty Party member.

Today, the newspaper reports on the Cherokee government, current events and Cherokee culture, people and history. In January 2007, the Phoenix introduced a website and began publishing in a broadsheet format. The newspaper also utilizes social media including Twitter, Facebook, Instagram, LinkedIn and sends out a newsletter.