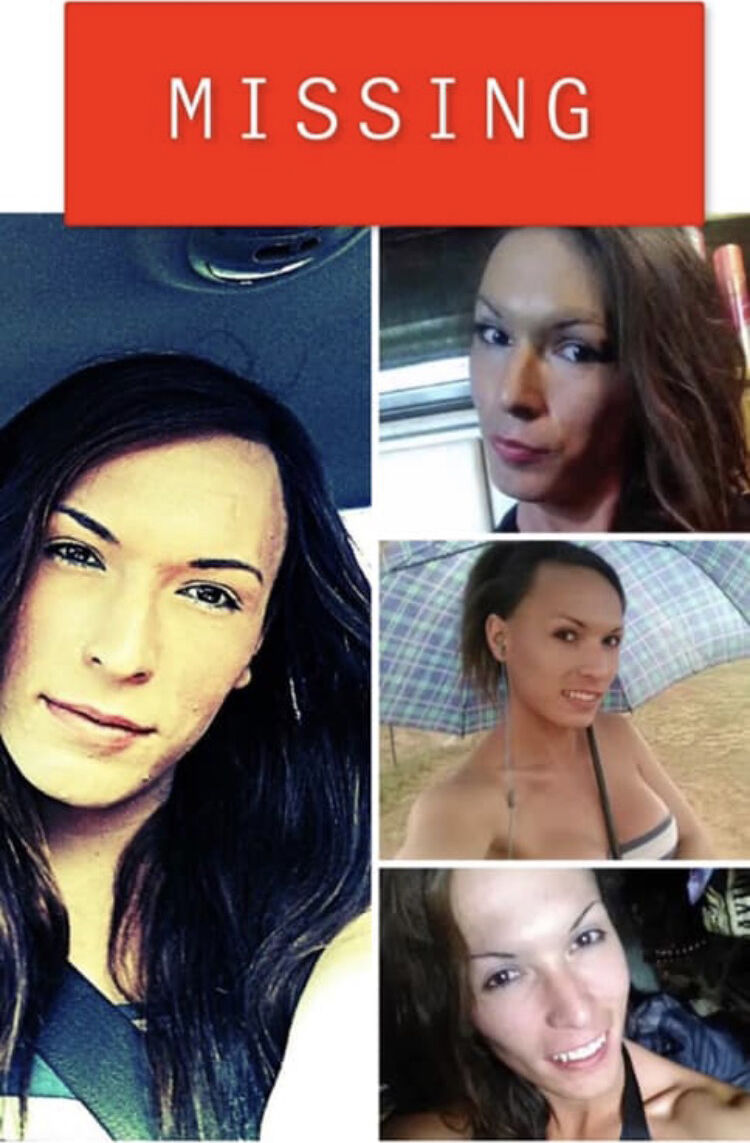 Cherokee Nation citizen Aubrey Dameron, 25, reportedly left her mother’s home at 3:30 a.m. on March 9, 2019, near Grove to meet somebody and did not return. The Oklahoma State Bureau of Investigation has assigned an investigator to the case. 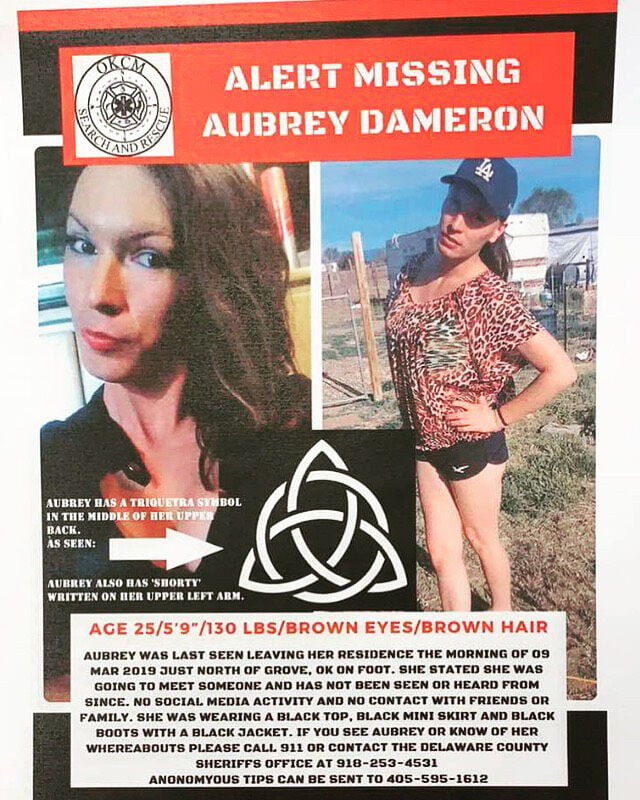 This flier includes an example of the triquetra tattoo on Aubrey Dameron’s back. The Cherokee Nation citizen has been missing from around the Grove area since March 9, 2019. 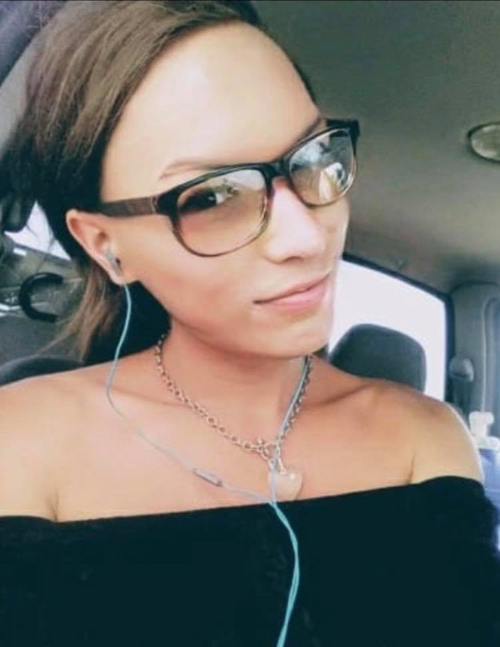 Cherokee Nation citizen Aubrey Dameron, 25, reportedly left her mother’s home at 3:30 a.m. on March 9, 2019, near Grove to meet somebody and did not return. The Oklahoma State Bureau of Investigation has assigned an investigator to the case.

This flier includes an example of the triquetra tattoo on Aubrey Dameron’s back. The Cherokee Nation citizen has been missing from around the Grove area since March 9, 2019.

Who is Aubrey Dameron?

Born Oct. 22, 1993, Dameron was just a few months younger than Fencer. Because of this, the pair became close and shared life experiences.

“From my perspective, she was so strong being able to just be her authentic self,” said Fencer.

He said while Dameron faced discrimination, she always wanted to make people feel “included” and “comfortable” in their own skins.

“She never wanted anyone to feel lonely or out of place,” said Fencer. “I think…because she felt that a lot of the time.”

Smith said Dameron and Fencer were not much older than her children, so they spent time together. Smith recalls memories of Dameron driving and singing old country songs.

“She just fell in love with “You’re the Reason God Made Oklahoma,” she said. “She would sing it with me and Christian, and my two kids would sit in the backseat and we’d be up there just singing and having a good ol’ time.”

Leading Up to Dameron’s Disappearance

Dameron later moved to New Mexico and lived with a boyfriend, but in late 2018, she moved back to Oklahoma.

Before her disappearance, Fencer said Dameron wasn’t reaching out as much, which was uncommon.

“Instead of hearing from her every day or every other day, it come to be every few weeks,” he said. “It was just it was very strange.”

According to the Delaware County Sheriff’s Office, Dameron was officially reported missing on March 11, 2019, and last seen on March 9. But Smith said she and Fencer didn’t find out until a week later, and that Dameron’s actual missing date seemed suspicious because of dwindling communication.

“The way we found out was a friend of mine had messaged me on social media and asked me if she was missing,” said Smith. She then called the DCSO to confirm Dameron’s disappearance. She said after it was confirmed, DCSO officials insisted she call Dameron’s mother for details. Smith said this is when she began seeing different stories about her niece’s disappearance.

Smith said some stories included Dameron’s mother watching her leave after she had woken up (at around 3:30 a.m.) to use the restroom and being able to give a full detail of what Dameron was wearing to Dameron’s brother following her out of the house and asking where she was going and her saying to “meet someone.”

After hearing multiple stories of Dameron’s disappearance, Smith called the DCSO to learn what was being done.

“I called to speak to the sheriff. He gets on the phone and tells me that he’s now being briefed on the case, and this was March 18, a week after the report was taken,” said Smith. “I call back the next day that I need to speak to someone who is handling my niece’s case. That’s when they give me to Captain (Gayle) Wells, and he tells me that he doesn’t believe she’s a missing person.”

Smith said Wells told her that they didn’t believe Dameron was missing because of her “lifestyle.”

In an interview with Oxygen.com, Wells, who retired in September 2020, said Dameron’s case was the last he ever reviewed and what made the case “unique was her lifestyle.”

“This was the last case I ever reviewed. I kept it in my office, within reach,” he said. “What made this case unique was her lifestyle. Not only was she transgender and very sexually active, but she was also a known drug abuser.”

Wells also said that in Dameron’s case, the investigative report was “100 pages long.”

“We made over 100 follow-up contacts in that case and never ever found anyone or anything that actually pointed us towards the location of Aubrey Dameron,” he said.

The first search for Dameron was around her home on March 23, two weeks after she was reported missing, Smith said.

“There’s too many red flags, family that should have been there helping search,” said Smith.

During the search, Smith said “a sock with possible blood on it” was found, but DNA results were “inconclusive.”

Smith said nearly three months later during Memorial Day weekend a tip led them to a shallow grave next to a black leather jacket near Kenwood.

Smith said a search party consisting of a team from Oklahoma City and canine teams with members from Louisiana, Texas and Arkansas conducted a week-long search.

“While we were out searching in this area…appeared to be a shallow grave and black leather jacket laying next to it,” said Smith.

Smith said what was discovered came back as “inconclusive” when compared to Dameron’s DNA sample.

“My thought is our own family didn’t even contact us and let us know that she was missing. So how can you trust them to give actual DNA of Aubrey’s? They could have given them anybody’s DNA,” said Smith.

The Cherokee Phoenix attempted to contact Dameron’s mother and brother for this report, but as of publication had not had any response from them.

Soon after the week-long search, Smith said, communication with the DCSO nearly ceased. “We would receive tips and we would pass them along, and just see their disregard for her life.”

While Dameron’s case is still being investigated, Smith said she could not speak on where it stands.

According to the DCSO, because of the 2020 U.S. Supreme Court’s McGirt v. Oklahoma ruling the office is no longer handling Dameron’s case and it “has been assumed by the FBI.”

With 2-1/2 years passed, Smith and Fencer still search, tell Dameron’s story and reflect on the “love” she brought to people.

“Christian used to tell me all the time that him and her would look up to me,” Smith said. “Then after hearing people’s stories after she went missing I’m like ‘I look up to her.’ She kept going. She didn’t let it define her. She lived how she wanted to live. She dressed how she wanted to dress. She was probably one of the strongest people I know. I can’t wrap my mind around why somebody would want to hurt her. She was just full of love.”

Fencer said since Dameron went missing he has reflected on her “positivity.”

“She was mistreated so much throughout her entire life by people, the outside world, that it’s really crazy to think that looking back all the positivity that she left in this world or that she’s leaving in this world,” he said.

Dameron is 5-foot-9 and 130 pounds. She is a transitioning transgender Native American with brown eyes, brown hair, a triquetra symbol tattoo on her back and another tattoo reading “shorty” on her upper left arm. She is entered into the National Crime Information Center and the National Missing and Unidentified Persons System.

Anyone with information is asked to call the OSBI at 1-800-522-8017. There is also the Facebook page “Missing-Aubrey-Dameron-from-Grove-Oklahoma.”