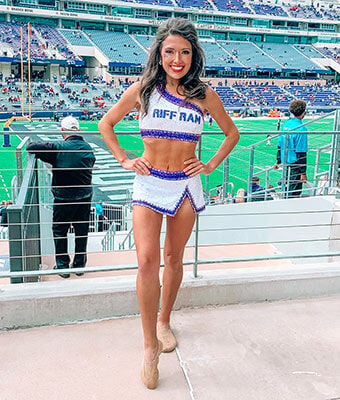 Cherokee Nation citizen Haylee Chiariello is a baton twirler at Texas Christian University in Fort Worth. She recently competed in the Miss Oklahoma pageant. 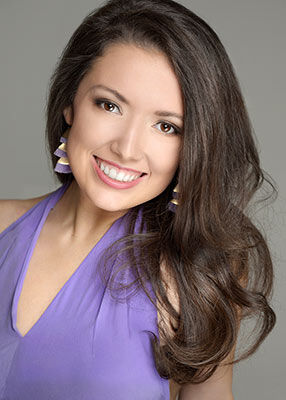 FORTH WORTH, Texas – An athletic, typical teenager at the time, Haylee Chiariello was faced with an unexpected, life-altering diagnosis.

“During a routine eye exam at the Oklahoma City Indian Clinic, it was discovered that my optic nerves were incredibly swollen,” Chiariello said. “Within two weeks, I was diagnosed with hydrocephalus, which is water on the brain. I had emergency brain surgery the next week. At the time, I was just a freshman in high school, so this was completely unforeseen. It all happened so fast.”

The Cherokee Nation citizen from Oklahoma City credits an early diagnosis and the subsequent recovery to thorough screenings.

“I wouldn’t have received that diagnosis without the care that I received at the Oklahoma City Indian Clinic,” she said. “For that I’m so grateful. I consider that my personal legacy: I want to continue to serve Native people because it saved my life.”

Now 22, Chiariello is riding the wave as a featured baton twirler at Texas Christian University in Fort Worth and recent contestant in the Miss Oklahoma pageant.

“What really fueled me towards a bright future was remembering my goals and my journey,” she said, “and that as a young Cherokee woman, I can really impact some lives when sharing my story of miraculous healing.”

Chiariello hopes to one day work in a nonprofit setting promoting health initiatives for Native Americans in addition to pursuing a law degree focusing on tribal law.

“Native people face disproportionately high rates of many different health challenges,” she said. “We’re struggling to overcome issues like diabetes and hypertension. It’s especially prevalent among our youth. As an athlete, I want to help be a part of that change. I use my experience as a baton twirler to show children that living a healthy, active lifestyle can be really fun and lead you to incredible places.”

“My dad is a U.S. Army veteran and served as a presidential escort,” Chiariello said. “He was in the honor guard, so he did the 21-gun salute and was involved with the Arlington Cemetery doing all of those incredible, incredible things. So he twirled rifles during those opportunities. Around the house, he would pick up a broomstick, an umbrella, a hockey stick, and he would twirl it. Of course, his kids wanted to try it, too, and it really stuck with me. It’s been my first love. It’s brought me to some incredible places and I’ve met some amazing people through this sport.”

Her baton twirling skills landed Chiariello a featured spot on the TCU team, performing in front of crowds as large as 70,000.

“I’m in awe to think that a young Cherokee girl who was told she had to have emergency brain surgery, that she may not regain the skills she had before, is now serving as a featured twirler at a major, D1 Big 12 institution,” she said. “I am so honored. But I still have a lot that I want to do. I’m just getting started.”

Chiariello was initially a student at the University of Oklahoma, but was lured to TCU with academic grants and the featured baton twirler spot.

“I have a major presence on this campus as a Native student,” she said. “TCU does not have a lot of Native American representation, but they’re trying to get that conversation started. I’ve been able to help in some of those efforts. I serve on TCU’s Race & Reconciliation Initiative committee. I serve as the sole student representative on TCU’s Native American Advisory Circle. I’m getting to be a part of those conversations about what we need to do to make Native people feel welcomed.”

“I actually introduced myself in Cherokee, and that was a wonderful opportunity to showcase Cherokee culture and the beauty of our language,” she said. “I take every opportunity to share my story and serve as an example of being a Native student at a private institution and what that looks like. It’s been a fun journey.”

Chiariello was born and raised in Oklahoma City, but her family traces back to Welch, Oklahoma, in Craig County. She and her three brothers were home-schooled, which offered the siblings “a really unique upbringing,” she said.

“It allowed us to really have a personal connection with our Cherokee culture,” she said. “It was wonderful and now we’re getting to do big things on collegiate campuses.”

Earlier this year – and for the first time – Chiariello competed for the title of Miss Oklahoma, earning a spot in the top 10.

“I spoke Cherokee on the Miss Oklahoma stage and I received the On-Stage Interview Award,” she said. “It was an absolute dream come true for me to be able to share that aspect of my life and be able to show people what a modern, Native American woman looks like.”

During the talent portion of the competition, Chiariello incorporated Native dance into her routine.

“So I wore my family’s fancy fringe and I did a Native-inspired baton twirling routine,” she said.

Following her pageant appearance, Chiariello was spotlighted in “Drum Major” magazine, a publication she grew up reading.