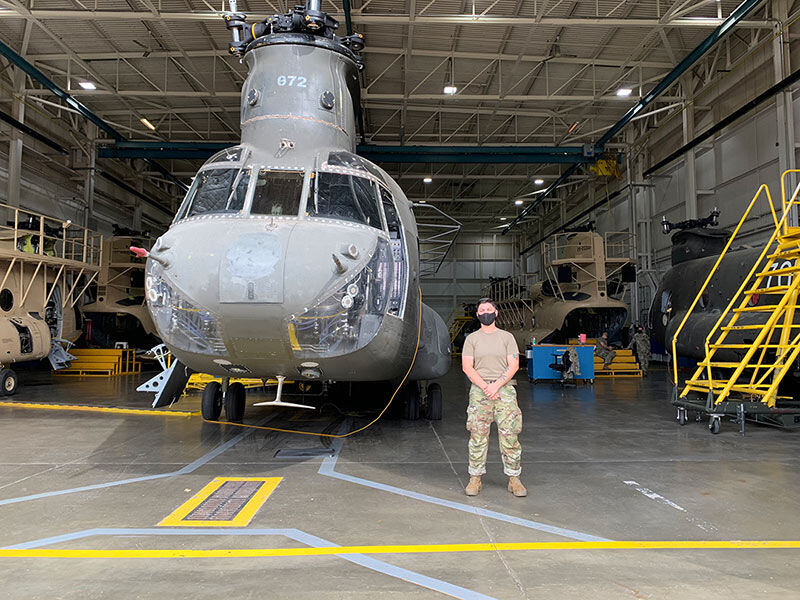 Cherokee Nation citizen Hilary Hume, who serves in the Army National Guard, is at advanced individual training in Fort Eustis, Virginia, where she learned helicopter repair. 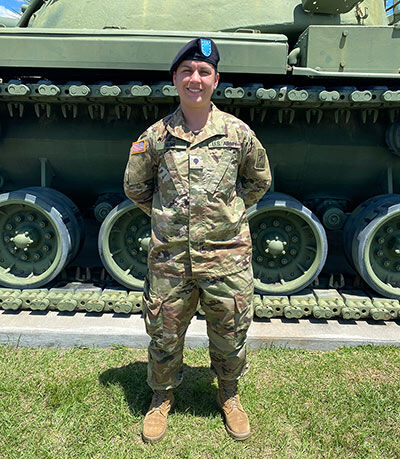 Cherokee Nation citizen Hilary Hume, who is serving in the Army National Guard, graduated from basic training in May. 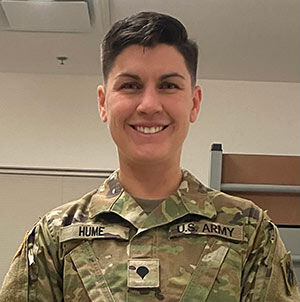 Cherokee Nation citizen Hilary Hume, who serves in the Army National Guard, is at advanced individual training in Fort Eustis, Virginia, where she learned helicopter repair.

Cherokee Nation citizen Hilary Hume, who is serving in the Army National Guard, graduated from basic training in May.

BROKEN ARROW – Cherokee Nation citizen Hilary Hume is serving in the Army National Guard. She gained the confidence to serve after working with service members at her job.

Growing up on a farm in the Wauhillau community in Adair County, Hume said she knew she wanted to serve since high school but did not have the confidence.

“I actually have always wanted to serve since I was in high school but I was too afraid to. But as I’ve gotten older, I have become more confident in myself,” she said.

After working with Army National Guard service members during the pandemic as a health inspector, she was able to gain insight into their experience, which ultimately led to her own about joining.

“Actually, during the pandemic I was working alongside National Guard because they were also employed to help us at the (Tulsa) health department for the COVID-19 testing and vaccination sites,” she said. “So I was actually able to work one on one with them and talk to them personally and what their experience is like. And joining the National Guard seemed like something that I would really like and it would fit my lifestyle a little better I guess, because I still wanted to be a civilian.”

She officially joined on Nov. 18, 2020, and liked the idea of serving on weekends and potentially getting called to mobilize when needed to help out where she can.

“I also get to be a soldier on the weekends and two weeks out of the year, and if I’m ever needed then I can also help my community in that as well,” she said. “Whenever there are tornadoes or natural disasters anywhere in the United States really, then I can potentially get mobilized to help with those efforts. So I’m actually able to directly help my community in that way. That’s what I really, really wanted to do was have that direct impact on people.”

Hume said most of her experience thus far comes from training. She did basic training earlier this year and graduated from advanced individual train on Sept. 29 in Fort Eustis, Virginia, where she earned her MOS 15U for helicopter repair.

She said one of the hardest things to endure since joining was basic training and being away from family and friends.

“The training environment is super stressful because at basic training you’re completely detached from the world, like I had no idea what was going on,” Hume said.

She said being in that environment was similar to a culture shock in the ways she had to deal with how training was and relied on her fellow recruits whom she became close with during that time.

“We were in such a high-stress environment that it was a culture shock in itself that we were just thrown into this training environment, being yelled at and screamed at,” Hume said. “We all went through hell together. It was terrible. We slept outside in the rain. We were standing outside in 40-degree weather at rest for like four hours. We just went through a bunch of crap together. So we had to talk to each other and find comfort in one another because there’s nobody else. There’s nothing else. You can’t talk to the drill sergeants. You can’t talk to your family. You’re only with those people that you’re around literally 24/7 so you’re going to become attached to them and rely on them.”

Hume said being a Native American who serves is important for representation.

“A lot of people when I would tell them I was Native American they were like ‘really, wow, that’s really cool,’” she said. “I was like ‘Yeah, I have my card. I’m a part of the community, and I live right next to our capital.’ People were really surprised and shocked that there are still Native Americans because there were people from Pennsylvania that didn’t have any interactions with Native Americans at all.”

She added that it is never too late for people do what scares them.

“I want to let them know that it’s never too late to do that thing that you’ve always wanted to do to or were too afraid to do in the past. I joined at 28 years old before I signed my papers last year. So I was a trainee going through basic training at 28 years old and I did it. I was not athletic when I joined. I had no military experience at all. So I went into it completely blind pretty much. I had no friends in the military that I really talked to. I think that people should just go for it and not be afraid to take that step,” she said.