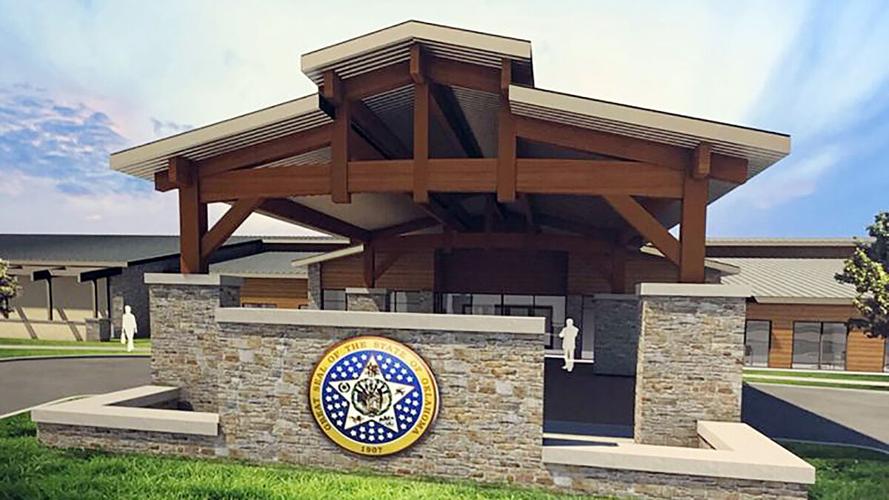 The Oklahoma Department of Veteran Affairs’ new veterans center in Sallisaw will sit on 90-acres on U.S. Highway 59, just south of Interstate 40. 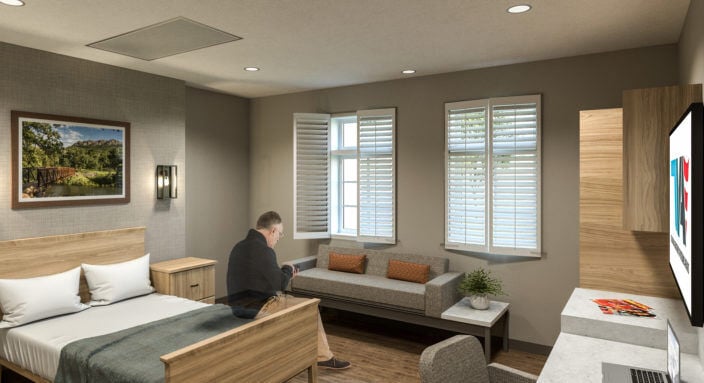 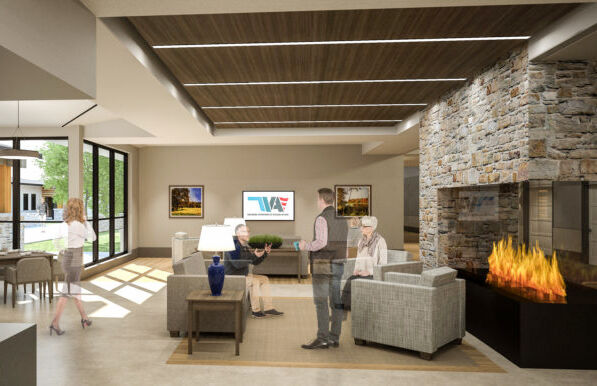 The 213,000-square-foot state veterans center in Sallisaw includes a reception area, 175 residential rooms, a dining room and multiple living areas. A room used as a theatre or for chapel can host larger gatherings.

The Oklahoma Department of Veteran Affairs’ new veterans center in Sallisaw will sit on 90-acres on U.S. Highway 59, just south of Interstate 40.

The 213,000-square-foot state veterans center in Sallisaw includes a reception area, 175 residential rooms, a dining room and multiple living areas. A room used as a theatre or for chapel can host larger gatherings.

SALLISAW – Due to some work that had to be redone on the facility, the Oklahoma Department of Veteran Affairs’ new veterans center in Sallisaw may not be ready until April 2024.

The $75 million long-term care facility will sit on 90-acres on U.S. Highway 59, just south of Interstate 40. The 213,000-square-foot building will accommodate up to 175 veterans from the eastern part of the state. The project includes a reception area, 175 residential rooms, a dining room and multiple living areas. A room used as a theatre or for chapel can host larger gatherings. A physical therapy room and pharmacy will also serve the medical needs of the residents.

Cherokee Nation officials, including Deputy Principal Chief Bryan Warner, took part in a groundbreaking ceremony on Sept. 25, 2020, and donated $300,000 in funds from Cherokee Nation Businesses to bring the facility to Sequoyah County. In 2018, the Cherokee Nation worked with the city of Sallisaw on relocating the veterans center from Talihina to Sallisaw.

According to a 2018 CN press release, the center is relocating from Talihina following a history of poor management and poor care of veterans.

“Our commitment to veterans just grows with the relocation of this center to Sallisaw,” then-Secretary of State Chuck Hoskin Jr. said in 2018. “Partnerships like this make our entire region stronger. Cherokee Nation is a model for how public-private-tribal partnerships should work.”

Warner said he drives by the construction site almost daily and city officials keep him “in the loop” on the progress of the building.

“I mean, it is a state project. And a lot of people get confused because we, the Cherokee Nation, are a part of this. But it was a multifaceted group of people that come and put this together. A lot of people, they’ll call about job inquiries, and I send them to the state,” Warner said.

He added the project is 12 to 18 months behind schedule but people would likely understand when they hear the reasons why.

“Something wasn’t right in the specs of the program. It wasn’t meeting fire safety codes and some other things. It was doors, the fire suppression system, and all that had been engineered wrong. So, they had to come back, and then I guess typically with any state project that’s likely federally funded, once they stopped they had to basically get rid of that group and restart the bid process. Everything is back on track,” Warner said.

The CN Tribal Council has also obligated up to $500,000 for parking lots and roads around the facility. Up to $250,000 has been earmarked from council districts 5 and 6.

“It will be something that comes on the tail end of this…so we haven’t expended any dollars from the tribe. It (funds) was earmarked, so it had to be specifically for road infrastructure or parking lot infrastructure,” Warner said. “So, if they didn’t need the whole amount, we typically leave language to have wiggle room. If they only need $385,000 that they can’t use the rest of that money because it’s earmarked for roads and parking lots.”

Warner said having such a major facility in Sallisaw will be “a game changer” for the city.

“It’s about 165-175 bed retirement facility. So, I think the local clinics, the local hospitals, the local nursing school, all of them are seeing an uptake in preparation,” he said. “For that end of Sallisaw, everyone has been looking towards how do we get growth back on South 59 towards the Brent Community and Wild Horse Mountain. I think this will help. There’s been some developers in the area that own land, some private developers that have come in and looked at putting in an area for retail space. It’s been proposed that if they ever were to be able to get a new hospital in Sequoyah County, that’s they would like to see it go.”

He added there has been interest from companies who usually build their companies and businesses along interstates to build in the Sallisaw area.

“So, you know, when you start to think all that the opportunities, really that VA Center is going to be a big part of what will bring a lot of folks there because the individuals that will stay there, obviously they’ll have family, and we want to make it a place that people can come and visit their family and enjoy what’s left of their hero’s last days.”