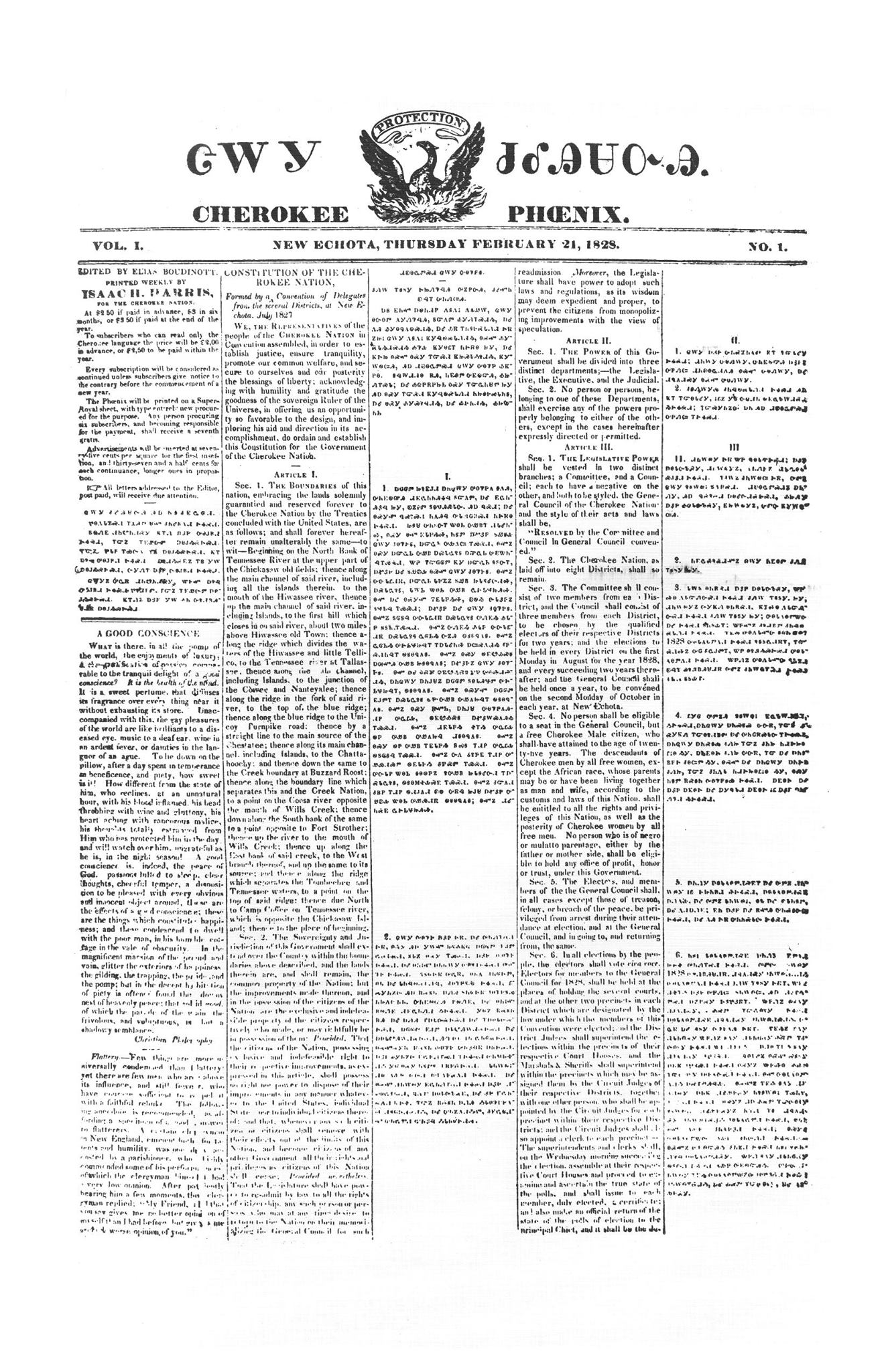 History of the Cherokee Phoenix

The first issue of the newspaper was printed on Feb. 21, 1828, in New Echota, Cherokee Nation (now Georgia), and edited by Elias Boudinot. It was printed in English and Cherokee, using the Cherokee syllabary created by Sequoyah.

Rev. Samuel Worcester and the American Board of Commissioners for Foreign Missions helped build the printing office, cast type in the Cherokee syllabary and procure the printer and other equipment. Also, Boudinot, his brother Stand Watie, John Ridge and Elijah Hicks, all leaders in the tribe at that time, raised money to start the newspaper.

In 1829, the newspaper name was amended to include the Indian Advocate at the request of Boudinot. The Cherokee National Council approved of the name change and both the masthead and content were changed to reflect the paper’s broader mission.

In the 1830s Boudinot and Principal Chief John Ross used the Cherokee Phoenix to editorialize against the Indian Removal Act of 1830 and the growing encroachment and harassment of settlers in Georgia.

As pressure for the Cherokee to leave Georgia increased, Boudinot changed his stance and began to advocate for the removal of Cherokee to the west. At first Chief Ross supported Boudinot’s opposing view but by 1832 the two leaders’ differences caused them to split and Boudinot resigned.

Elijah Hicks, a brother-in-law of Ross, was appointed editor in August 1832, but the Phoenix was silenced in May 1834 when the Cherokee government ran out of money for the paper. Attempts were made to revive the paper. When word leaked that Chief Ross intended to move the printing press from New Echota to nearby Red Clay, Tenn., the Georgia Guard, who were already brutally oppressing the Cherokee people, moved in and destroyed the press and burned the Cherokee Phoenix office with the help of Stand Watie who was a member of the Treaty Party. The party advocated selling what remained of Cherokee land and moving west.

Four years later most of the Cherokees who remained on their lands in Georgia, Tennessee and North Carolina were rounded up and forcibly marched or sent by boat to Indian Territory.

A Cherokee Nation newspaper was again published in September 1844 in the form of the Cherokee Advocate. The paper was published in Tahlequah and edited by Cherokee citizen William Potter Ross, a graduate of Princeton University.

The Cherokee Advocate returned after the Cherokee government was officially reconstituted in 1975. The newspaper continued under that name until October 2000 when the paper began using the name Cherokee Phoenix and Indian Advocate again. Also, that same year, the Tribal Council passed the Cherokee Independent Press Act of 2000, which ensures the coverage of tribal government and news of the Cherokee Nation is free from political control and undue influence.

In January 2007, the newspaper began using the original Cherokee Phoenix name,launched a website and began publishing in a broadsheet format. Today, the newspaper reports on the tribe’s government, current events and Cherokee culture, people and history. The news organization has also broadened its outreach to include locally aired radio shows, Facebook posts, Twitter feeds, Instagram profiles and a YouTube channel.