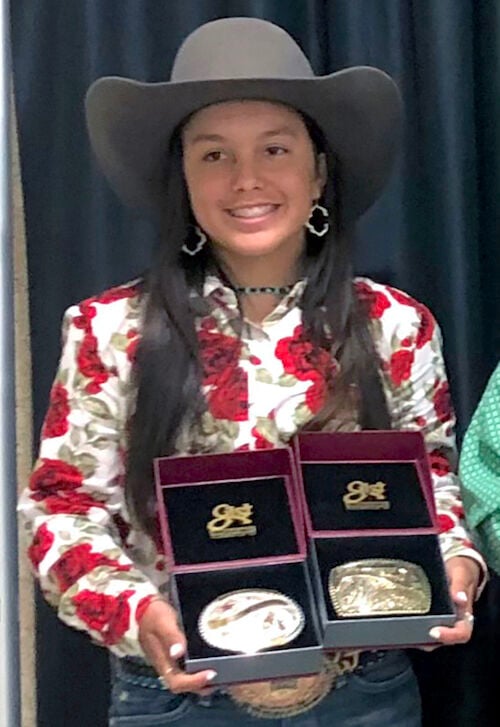 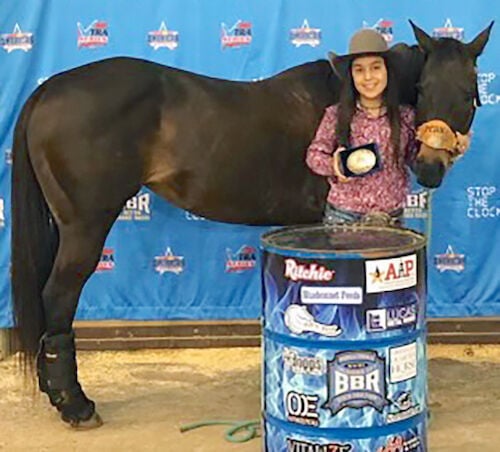 Barrel rider Karlee Jennings, 13, poses with her horse after a recent rodeo event. Since 2015, she’s placed in more than 20 rodeo events at the local, state, national and international levels.

Barrel rider Karlee Jennings, 13, poses with her horse after a recent rodeo event. Since 2015, she’s placed in more than 20 rodeo events at the local, state, national and international levels.

TAHLEQUAH – At 13 years old, Cherokee Nation citizen Karlee Jennings has already made her mark on the barrel-racing rodeo scene.

Since 2015, she’s placed in more than 20 rodeo events at the local, state, national and international levels. Her winnings so far include seven saddles and more than 30 championship buckles. At 10 years old, Jennings was the International Miniature Rodeo Association’s junior barrel-racing champion.

“That one’s probably the most meaningful to me,” Jennings said. “I never thought I would have won it on that horse, especially because of how much we struggled. I struggled hitting barrels on that horse, and I had to make like four clean runs that weekend. I was clean, and I ended up winning the whole thing.”

“She loves that barrel racing,” her father and former bull rider Chris Jennings said. “She doesn’t do anything but absolutely ride horses.”

The teen’s passion for rodeo was ignited at 6 years old after she entered a local mutton-busting competition.

“By that next weekend I was entering every event,” she said. “I just kind of fell in love with it from day one. All I do now is just rodeo every weekend.”

Competitors make tight circles in a specific pattern around three barrels in the timed event. According to Iowa State University’s equine extension and outreach program, barrel racing “is an intense sport where the winner is determined by just thousandths of a second.”

“The first barrel, you’ve got to go around it on the right side and then the other two is two left turns,” Jennings said. “If I hit a barrel, it’s plus 5 (seconds) to my time. That plays a big part in where you place.”

Jennings is now competing on her third horse.

“The one I’m actually running right now, I’ve only had her for eight months,” she said. “That’s not really a long time. I had to learn how to ride this one because it’s like different from all my other ones. We’re starting to get connected. At first, we were kind of struggling a little bit. But now it’s finally coming together.”

Practice, she said, takes place at her home near Tahlequah.

“My dad built me an arena and it’s in my backyard. So I’ll just usually ride out there or I’ll ride in the field,” she said. “It’s a lot of work, you know, having to take care of these horses. You never really get a day off. You have to tend to them at all times.”

Jennings, who attends an online charter school, will soon enter the eighth grade. She will also no doubt continue entering rodeo events.

“Honestly, the rodeos just get tougher as I get older,” she said. “The junior high level is almost as tough as the open, which is like 18 and over.”