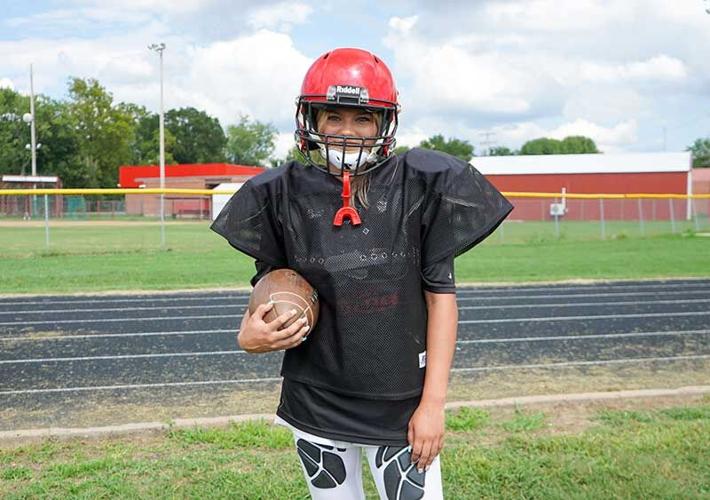 Cherokee Nation citizen Kinley Catron, a senior at Stilwell High School, practices her kicking during the football team’s practice in Stilwell, Oklahoma. During a scrimmage on Aug. 18, Catron scored a two-point conversion. 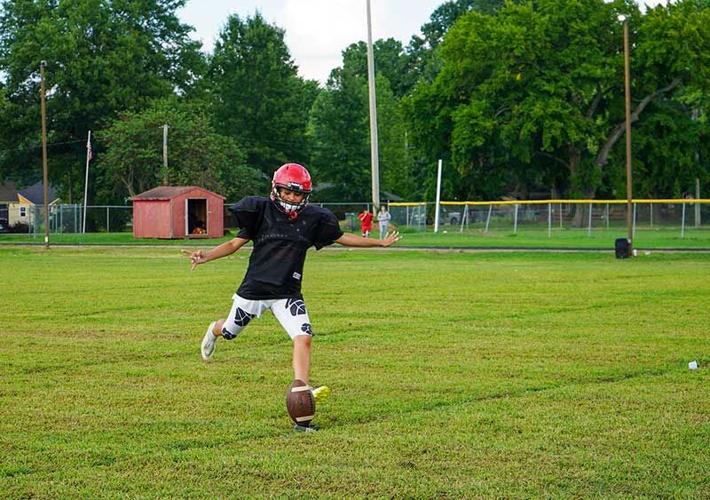 Cherokee Nation citizen Kinley Catron, a senior at Stilwell High School, practices among her team in Stilwell, Oklahoma. Catron also plays soccer, which she said lends itself to kicking in football. 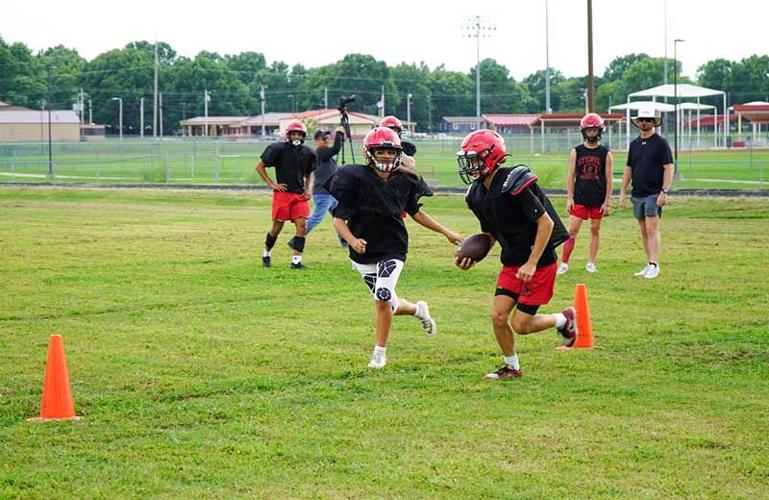 Cherokee Nation citizen Kinley Catron, a senior at Stilwell High School, joined the school’s football team during her last year at the school.

Cherokee Nation citizen Kinley Catron, a senior at Stilwell High School, practices her kicking during the football team’s practice in Stilwell, Oklahoma. During a scrimmage on Aug. 18, Catron scored a two-point conversion.

Cherokee Nation citizen Kinley Catron, a senior at Stilwell High School, practices among her team in Stilwell, Oklahoma. Catron also plays soccer, which she said lends itself to kicking in football.

Cherokee Nation citizen Kinley Catron, a senior at Stilwell High School, joined the school’s football team during her last year at the school.

STILWELL – After playing soccer for nearly all of her life, Cherokee Nation citizen Kinley Catron decided to try her kicking skills in football. The Stilwell High School senior is officially spending her last year at the school as a kicker on the Stilwell Indians Football roster.

“I thought it was going to be a lot different, but kicking a football is not too much different than a soccer ball, so I think it will work out for me pretty well,” said Catron, who has been playing soccer since she was three-years-old.

Catron credits her soccer teammates, who are also on the football team, for pushing her to try out for the team.

“It was actually the football boys. I play soccer with a few of them. We were at a soccer practice and they were like joking around with me and they were like, ‘hey Kinley, they’re needing a kicker.’ And it was just a joke at first, but I kind of like stood there for a little bit and kind of looked at them and they were like, ‘what?’ They didn’t think that I was going to be like, ‘OK, let’s do it.’ But I was,” she said.

When she tried out, and eventually got on the team, Catron said she was a “little nervous,” but during a scrimmage on Aug. 18, she made waves.

“She’s been drawing up plays and trying to convince us to let her run the football or catch a pass,” said SHS Head Football Coach Beau Collins. “So, we saw an opportunity for her to try it during the scrimmage, told her we were going to do it. Really, I didn’t think that the quarterback would throw her the ball. Probably wasn’t the best defensive situation to run the play that we ran for, but it ended up working out really well.”

Catron said for the entire game she was standing and waiting to go in.

“The entire game I was standing over there and the coaches would kind of look at me and most of the time they look at me and they laugh because I look so weird. …I’m like, ‘put me in coach, I’m ready to go.’ It was a joke for the most part, but I was also like, ‘I want to see how I do, put me out there,’” she said. “We weren’t thinking that we were going to score a touchdown right there, and it was going to end up being a two-point conversion. I was actually going to run the ball, but it ended up working out pretty well.”

Catron said that moment was one of the “best” feelings, and she owes it to her team.

“Having everybody be so happy for me. Having the team be so happy for me and just the way the boys reacted is probably the best feeling,” she said. “I owe it all to this team. They really helped me and those boys were pushing for me to get into the game. So, none of this would have happened without them.”

While this is not his first time coaching a female student, Collins said this was the first time to do so in football.

“It’s the first time I’ve ever had a girl come out and play football in the 15 years that I’ve been coaching,” he said. “I’ve been a head softball coach for 14 years, so it’s not the first-time coaching girls just the first time having them on a football team.”

Collins said Catron was a “little” behind but she is getting a crash course in the sport.

“With her background in soccer, most of her duties were kicking and she’s done really well with that,” he said. “She kind of got bored in practice and wanted to take part in other stuff because all we’ve really been having her do was kick the ball. So, she started…learning how to catch a football, how to run routes and finally convinced me to let her get one during the scrimmage...”

Collins added that a lot of the feedback from Catron’s play has been “positive” and “encouraging.”

“We don’t have a lot of numbers right now in Stilwell and there was a kid that wanted to come out and play and she just happened to be a girl and committed to it. She runs with the team, does the workout and does everything that the rest of the team does,” he said. “The way that the boys celebrated when she caught the pass, I had kids coming off the sideline running and wanting to high-five her. That was probably the biggest thing to me was that the team was happy for her.”