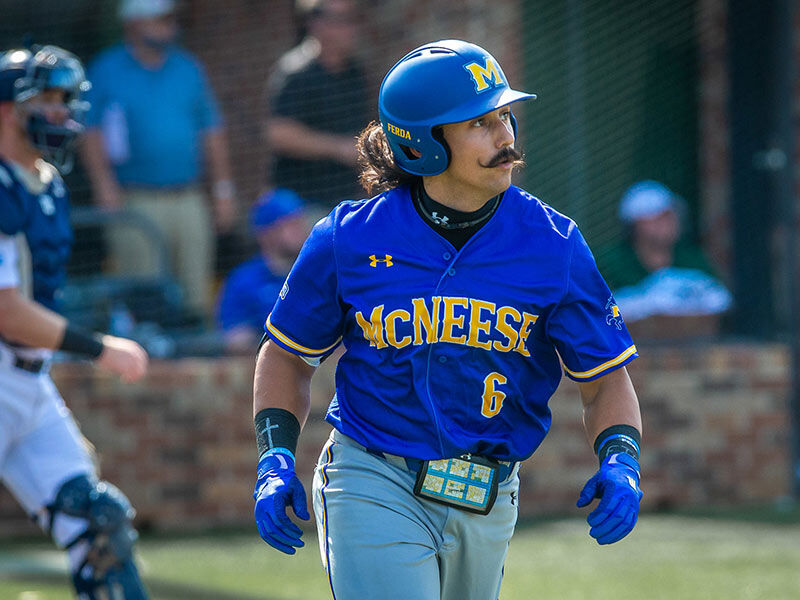 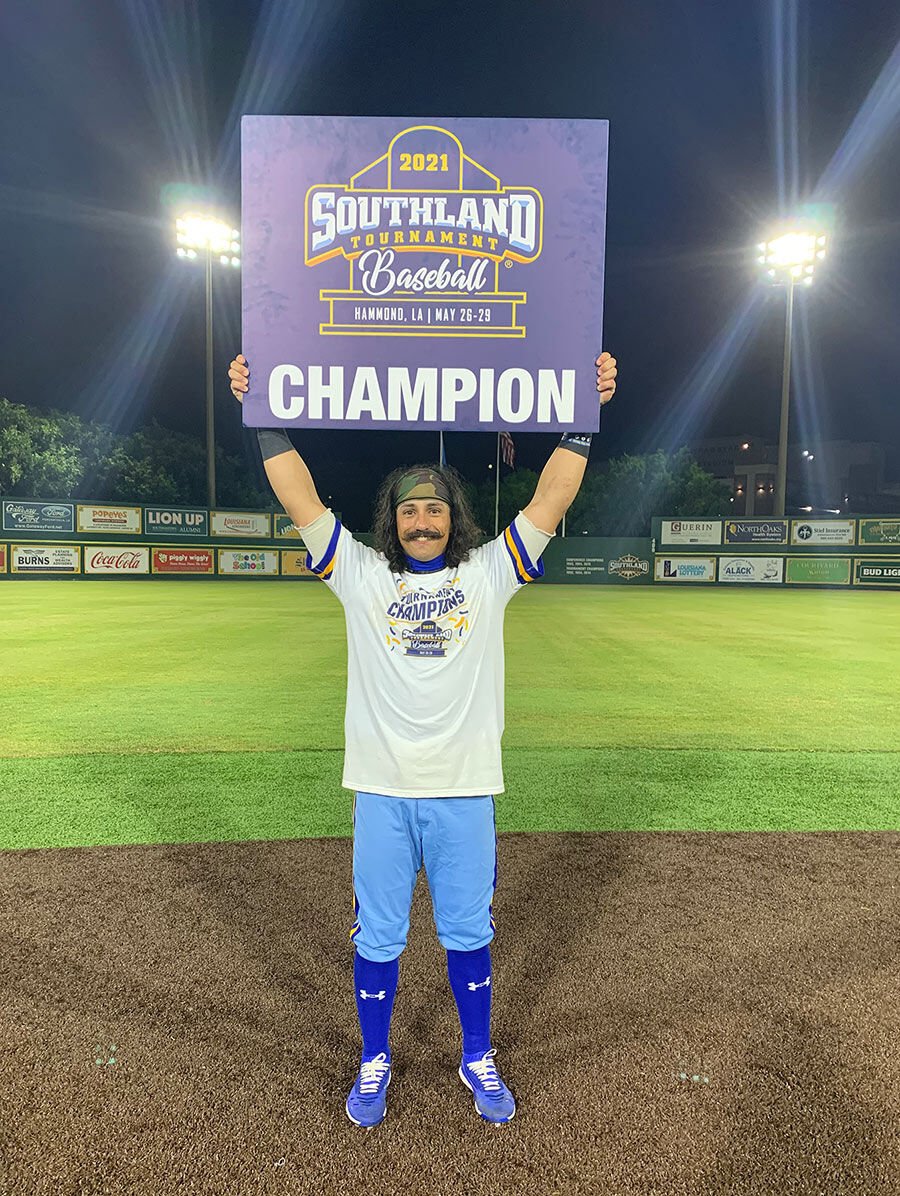 Tre’ Obregon was in a celebratory mood after the McNeese State Cowboys, entering a a seven seed, won the Southland Conference baseball tournament.

Tre’ Obregon was in a celebratory mood after the McNeese State Cowboys, entering a a seven seed, won the Southland Conference baseball tournament.

LAKE CHARLES, La. – For a while, it looked like the 2021 college baseball season might not happen for the McNeese State Cowboys and catcher-first baseman Tre’ Obregon III, a Cherokee citizen.

The doubt was not caused by COVID, but by Hurricane Laura’s visit to Lake Charles on Aug. 27, 2020. The hurricane had the highest wind speeds ever recorded in a hurricane to strike Louisiana, and claimed 77 lives. Hurricane Delta soon followed on Oct. 9. Lake Charles was devastated.

“Following the two hurricanes, our city was struggling along with our school and baseball program,” Obregon said. “We lost about 60% of everything we had at our baseball facility. We were not able to practice as a team until November 1st at local high schools in the area. It wasn’t until late January were we able to use our home field again.”

Minus a locker room, indoor training facility and weight room, the Cowboys – against the odds – were ready to open the season in February against the Alabama Crimson Tide when the weather again intervened with the worst winter storm ever recorded in Lake Charles leaving thousands without water and electricity for days. And just before the baseball team departed for the conference tournament with a seven seed, Lake Charles endured severe flooding.

“A few of my teammates' houses flooded and everything we had left in our baseball facility flooded, leaving us with just our uniforms and a few equipment items,” Obregon said. “With all the natural disasters we experienced in Lake Charles, losing just about all our baseball equipment, the McNeese State Cowboys won the Southland Conference Tournament, which gave us an automatic bid to the 2021 NCAA Regional Tournament. The season we had for the Cowboys in Lake Charles was a year I will never forget for the rest of my life.”

Regionals didn’t go as Obregon hoped, with losses to TCU and Oregon State, but making it into the national bracket was still reason to celebrate for a team that endured so much. MSU finished with a 32-30 record. Obregon started 43 games for the Cowboys, batting .321 with 34 RBI including a couple of home runs. His .382 on-base percentage was seventh best on the team.

Obregon said baseball has taken him around the country and introduced him to people throughout his life. He served as batboy for his father’s youth league clubs and was a batboy for Sallisaw High School before age 9.

“Being a batboy for the Sallisaw High School team then eventually playing for the Black Diamonds in high school was an absolute honor,” he said. “Being a part of the second team in Sallisaw history to make it to the state tournament was a dream come true. Being able to represent my hometown I grew up in and play for a program I grew up through was nothing short of a dream. I enjoyed my time playing at Sallisaw, and it meant the world to me to be one of the few players in Sallisaw baseball history to be selected for All-State.”

Obregon was a catcher for the East team in the Oklahoma Baseball Coaches Association all-state game, along with his selection to the Oklahoma Coaches Association all-state team. He was a first-team Louisville Slugger All-American, and was named to the NJCAA Region II all-tournament team during his junior college career. This year, he was named the second team DH of the Southland’s all-conference team.

He has also been listed on presidents’ and deans’ honor rolls throughout his career. Obregon was recently named a third team academic all-American.

Obregon is aware of his Cherokee lineage and says it has influenced him since high school, and he has further embraced it in Louisiana.

“Since moving to Lake Charles, many folks down there have never met anyone that is part of a recognized tribe,” he said. “Many people in Louisiana do not know much about Indian Territory, the Five Civilized Tribes, or even where Oklahoma is on a map. Since being in Louisiana I have informed many people about our heritage, some of our customs and what it is like living in (Indian Country) or the Cherokee Reservation. My teammates and friends in Louisiana think my Cherokee heritage is very unique, and they respect my culture considering the information I have shared about the Cherokees.”

At age 24, Obregon is still playing the sport he loves and hopes to continue his involvement for “more years to come.”

“I thank our coaches that helped me along the way and my family for making my baseball career happen,” he said. “Without them, I wouldn’t have made it to where I am today. Playing baseball for over 20 years of my life has been nothing short of amazing, regardless of the ups and downs that come with baseball. The life lessons I have learned through sport have shaped me into the person I am today.”